listen), French Malines, traditional English Mechlin[n 1]) is a city and municipality in the province of Antwerp, Flanders, Belgium. The municipality comprises the city of Mechelen proper, some quarters at its outskirts, the hamlets of Nekkerspoel (adjacent) and Battel (a few kilometers away), as well as the villages of Walem, Heffen, Leest, Hombeek, and Muizen. The Dijle flows through the city, hence it is often referred to as the Dijlestad ("City on the river Dijle").

Mechelen lies on the major urban and industrial axis Brussels-Antwerp, about 25 km from each city. Inhabitants find employment at Mechelen's southern industrial and northern office estates, as well as at offices or industry near the capital and Zaventem Airport, or at industrial plants near Antwerp's seaport.

Mechelen is one of Flanders' prominent cities of historical art, with Antwerp, Bruges, Brussels, Ghent, and Leuven. It was notably a centre for artistic production during the Northern Renaissance, when painters, printmakers, illuminators and composers of polyphony were attracted by patrons such as Margaret of York, Margaret of Austria and Hieronymus van Busleyden.[2] 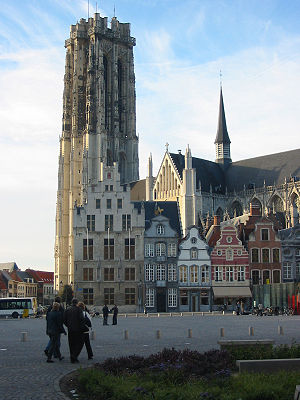 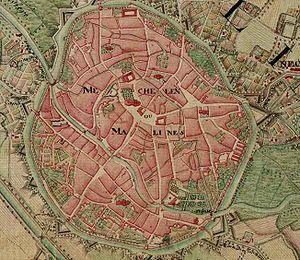 Mechelen on the Ferraris map (around 1775)

Archaeological proof of habitation during the La Tène era in the triangle Brussels-Leuven-Antwerp, mainly concentrated around Mechelen which originated in wetlands, includes an 8.4 metre long canoe cut from an oak tree trunk and a settlement of about five wooden houses, at Nekkerspoel.[3]

The area of Mechelen was settled on the banks of the river during the Gallo-Roman period as evidenced by several Roman ruins and roads. Upon Rome's declining influence, during 3rd–4th centuries the area became inhabited by Germanic tribes, a few centuries later Christianized assumedly by the Irish or Scottish missionary St. Rumbold, (Rombout in Dutch), who would have also built a monastery.

Around 1200 started the building of the cathedral that is dedicated to the saint.

Antwerp lost profitable stapelrechten (rights as first seller) for wool, oats and salt to Mechelen in 1303 when John II, Duke of Brabant, granted City rights to the town. This started a rivalry between these cities that would last well into the 20th century.

In the 15th century, the city came under the rule of the Dukes of Burgundy, marking the beginning of a prosperous period. In 1473 Charles the Bold moved several political bodies to the city, and Mechelen served as the seat of the Superior Court until the French Revolution. In 1490, a regular postal service between Mechelen and Innsbruck was established.

The highly lucrative cloth trade gained Mechelen wealth and power during the Late Middle Ages and it even became the capital of the Low Countries (very roughly the Netherlands, Belgium and Luxembourg) in the first half of the 16th century under Archduchess Margaret of Austria.

During the 16th century the city's political influence decreased dramatically, due to many governmental institutions being moved to Brussels. Mechelen compensated for this by increasing prominence in the religious arena: in 1559 it was proclaimed the Archdiocese of Mechelen, seat of religious authority over the territory that would eventually become Belgium. In 1961, "Brussels" was added to the title, resulting in the current Archdiocese of Mechelen-Brussels.

Mechelen also retained further relevance as the Great Council of Mechelen remained the supreme court of the territory until the French Revolutionary Wars. In 1572, during the Eighty Years' War, the city was burned and sacked by the Spanish. After this pillaging, the city was rebuilt. It was during this time that the tradition of furniture making, still seen today, began. In 1781, Joseph II, Holy Roman Emperor, ordered the destruction of the city's fortified walls – their former location however continues to be referred to in the Latin terms intra muros (within the walls) and extra muros (outside), and meanwhile the site became that of the inner ring road.[4]

The city entered the industrial age in the 19th century. In 1835, the first railway on the European continent linked Brussels with Mechelen, which became the hub of the Belgian railway network. This led to a development of metalworking industries, among others the central railway workshops which are still located in the town today. During World War II, the extensive Mechlinian[n 1] railway structure had caused the Nazi occupation forces to choose Mechelen for their infamous transit camp.

Several famous meetings on the Christian religion are connected to the name of the city. One in 1909 is thought to have inaugurated the Liturgical Movement. Between 1921 and 1925 a series of unofficial conferences, known as the Malines Conversations,[n 1] presided over by Cardinal Mercier and attended by Anglican divines and laymen, including Lord Halifax, was the most significant of early attempts at the reconciliation between the Anglican and Roman Catholic Churches. 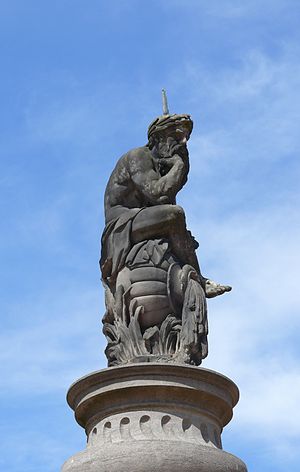 Statue of Neptune in Mechelen. The statue is also called Vadderik (lazy fat man). It is part of a water fountain erected in 1718. It was made by Frans Langhemans, a sculptor from Mechelen, at the behest of the city council. The inscription reads SPQM or Senatus Populusque Mechliensis (the council and population of Mechlin).

Most cities in Flanders have a mock name for their inhabitants. Since 1687, for their heroic attempt to fight the fire high up in the Saint-Rumbold's Tower, where the gothic windows had shown the flaring of only the moon between clouds, Mechlinians have been called Maneblussers (moon extinguishers).

Once every 25 years, a Parade, the Ommegang, commemorates both the arrival of Holy Roman Emperor Maximilian I, father of Archduchess Margaret of Austria, and also other major events of the city's past. The Ommegang had an extra edition in 2000 for the 500th anniversary of the birth of Charles V. This cortege shows the city's six 15th–17th-century Giants and other serious and humoresque puppets and carts, all typically made on a huge scale, and has been UNESCO Masterpiece of the Oral and Intangible Heritage of Humanity since 2005.

The city's 17th-century wooden mascot, which since 1775 has been called Opsinjoorke 'the doll', is pulled about on a sheet as part of the Ommegang. Nowadays, it is the replica that is so pulled around the city. A recent bronze statue depicting the Opsinjoorke stands in front of the Belfry.

The annual parade of carts decorated with flowers (comparable to that of Blankenberge for Mechlinian florists still prepare up to half of decorations), and with vegetables, – all of which are local to the area—has been indefinitely canceled since the beginning of the 21st century due to lack of financing by the City.[5]

In spring, a legendary holy statue of Our Lady is the main feature in the Procession of Hanswijk.

Informally, many Mechlinians (in Dutch Mechelaars and locally pronounced Mecheleirs, people from this city) daily speak Mechlinian (in Dutch as well as locally Mechels), a dialect by Dutch-speakers of Belgium pin-pointingly distinct from other Brabantic dialects by three different vowels of Dutch (as in zout or rauw, in kei or bijl, in nu) being typically pronounced as a same vowel – close to the one in English 'raw' which does not appear in other dialects of the Flemish Region or in standard Dutch. Since 1995, a subscribers' quarterly, De Mecheleir, shows old photographs of Mechelen and has stories on the local history, as well as a few columns written mimicking the dialect, for which no spelling is generally determined.[6] 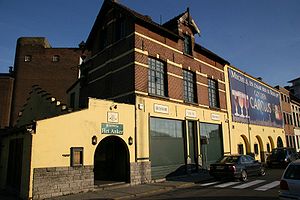 The brewery Het Anker, home of the Gouden Carolus beer

Mechelen was at the heart of the revival of the carillon in the early 20th century, and hosts its principal school in the world to this day.[7][8]

The area around Mechelen is famous for the cultivation of vegetables, among which are Belgian endive (witloof), asparagus, and cauliflower. Founded in the city, the Mechelse Veilingen in neighbouring Sint-Katelijne-Waver is the largest co-operative vegetable auction in Europe.[9]

One of the four breeds of the Belgian Sheepdog is the local Malinois. The Mechelse koekoek is a local poultry breed, fleshy chickens with black and white feathers which extend on the birds' legs, with colours reminiscent of a cuckoo, hence the name.

Mechelsen Bruynen was allegedly the emperor Charles V's favourite beer. A version is still brewed in the city at Het Anker brewery. 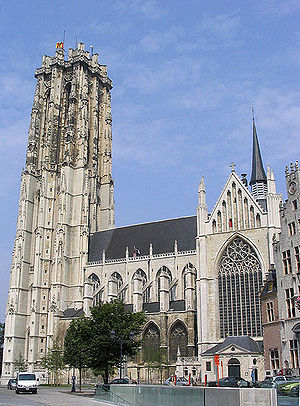 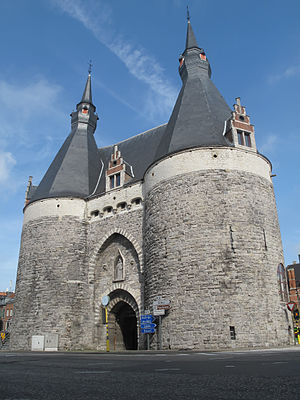 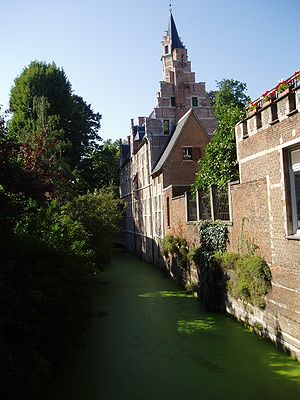 The city of Mechelen uses ANPR cameras since September 2011 to check all inbound and outbound cars against a database of stolen, non-insured and cars listed for other reasons. In case of a positive match, an alarm is generated in the dispatching room, enabling the police to quickly intercept the car. Mechelen was one of the first cities in Belgium to use ANPR on this scale. As of early 2012, 1 million cars per week are checked in this way. Mechelen started this project with SAIT Zenitel.[12]