From Infogalactic: the planetary knowledge core
Jump to: navigation, search
This article is about the Greek mythological figure. For the play by Euripides, see Medea (play).
For other uses, see Medea (disambiguation). 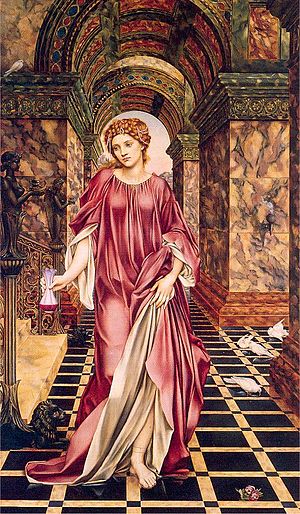 In Greek mythology, Medea (/mɪˈdiːə/; Greek: Μήδεια, Mēdeia, Georgian: მედეა, Medea) is a sorceress who was the daughter of King Aeëtes of Colchis,[1] niece of Circe, granddaughter of the sun god Helios, and later wife to the hero Jason, with whom she had two children, Mermeros and Pheres. In Euripides's play Medea, Jason leaves Medea when Creon, king of Corinth, offers him his daughter, Glauce.[2] The play tells of Medea avenging her husband's betrayal by killing their children.

The myths involving Jason have been interpreted[3] as part of a class of myths that tell how the Hellenes of the distant heroic age, before the Trojan War, faced the challenges of the pre-Greek "Pelasgian" cultures of mainland Greece, the Aegean and Anatolia. Jason, Perseus, Theseus, and above all Heracles, are all "liminal" figures, poised on the threshold between the old world of shamans, chthonic earth deities, and the new Bronze Age Greek ways.[4]

Medea figures in the myth of Jason and the Argonauts, a myth known best from a late literary version worked up by Apollonius of Rhodes in the 3rd century BC and called the Argonautica. However, for all its self-consciousness and researched archaic vocabulary, the late epic was based on very old, scattered materials. Medea is known in most stories as an enchantress and is often depicted as being a priestess of the goddess Hecate or a witch. The myth of Jason and Medea is very old, originally written around the time Hesiod wrote the Theogony. It was known to the composer of the Little Iliad, part of the Epic Cycle. 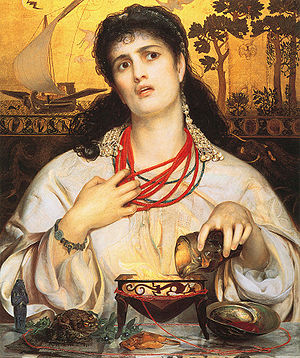 Medea by Anthony Frederick Augustus Sandys (painted 1866-68); its rejection for exhibition at the Royal Academy in 1868 caused a storm of protest

Medea's role began after Jason came from Iolcus to Colchis, to claim his inheritance and throne by retrieving the Golden Fleece. In the most complete surviving account, the Argonautica of Apollonius, Medea fell in love with him and promised to help him, but only on the condition that if he succeeded, he would take her with him and marry her. Jason agreed. In a familiar mythic motif, Aeëtes promised to give him the fleece, but only if he could perform certain tasks. First, Jason had to plough a field with fire-breathing oxen that he had to yoke himself. Medea gave him an unguent with which to anoint himself and his weapons, to protect him from the bulls' fiery breath. Next, Jason had to sow the teeth of a dragon in the ploughed field (compare the myth of Cadmus). The teeth sprouted into an army of warriors. Jason was forewarned by Medea, however, and knew to throw a rock into the crowd. Unable to determine where the rock had come from, the soldiers attacked and killed each other. Finally, Aeëtes made Jason fight and kill the sleepless dragon that guarded the fleece. Medea put the beast to sleep with her narcotic herbs. Jason then took the fleece and sailed away with Medea, as he had promised. Apollonius says that Medea only helped Jason in the first place because Hera had convinced Aphrodite or Eros to cause Medea to fall in love with him. Medea distracted her father as they fled by killing her brother Absyrtus. 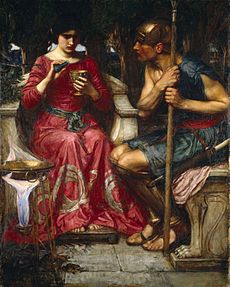 In some versions, Medea was said to have dismembered his body and scattered his parts on an island, knowing her father would stop to retrieve them for proper burial; in other versions, it was Absyrtus himself who pursued them, and was killed by Jason. During the fight, Atalanta, a member of the group helping Jason in his quest for the fleece, was seriously wounded, but Medea healed her. According to some versions, Medea and Jason stopped on her aunt Circe's island so that she could be cleansed after the murder of her brother, relieving her of blame for the deed.

On the way back to Thessaly, Medea prophesied that Euphemus, the helmsman of Jason's ship, the Argo, would one day rule over all Libya. This came true through Battus, a descendant of Euphemus.

The Argo then reached the island of Crete, guarded by the bronze man, Talos (Talus). Talos had one vein which went from his neck to his ankle, bound shut by a single bronze nail. According to Apollodorus, Talos was slain either when Medea drove him mad with drugs, deceived him that she would make him immortal by removing the nail, or was killed by Poeas's arrow (Apollodorus 1.140). In the Argonautica, Medea hypnotized him from the Argo, driving him mad so that he dislodged the nail, ichor flowed from the wound, and he bled to death (Argonautica 4.1638). After Talos died, the Argo landed.

Jason, celebrating his return with the Golden Fleece, noted that his father Aeson was too aged and infirm to participate in the celebrations. Medea withdrew the blood from Aeson's body; she infused it with certain herbs and returned it to his veins, invigorating him.[5] The daughters of king Pelias saw this and wanted the same service for their father.

While Jason searched for the Golden Fleece, Hera, who was still angry at Pelias, conspired to make Jason fall in love with Medea, whom Hera hoped would kill Pelias. When Jason and Medea returned to Iolcus, Pelias still refused to give up his throne, so Medea conspired to have Pelias' own daughters kill him. She told them she could turn an old ram into a young ram by cutting up the old ram and boiling it in magic herbs. During her demonstration, a live, young ram jumped out of the pot. Excited, the girls cut their father into pieces and threw him into a pot. Having killed Pelias, Jason and Medea fled to Corinth. 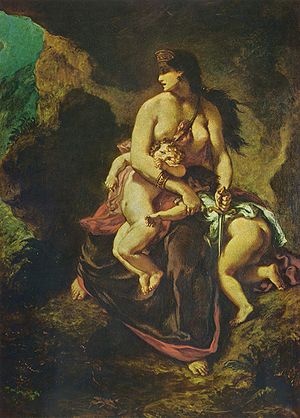 In Corinth, Jason abandoned Medea for the king's daughter, Glauce. Medea took her revenge by sending Glauce a dress and golden coronet, covered in poison. This resulted in the deaths of both the princess and the king, Creon, when he went to save her. It is said that two of her sons, Mermeros and Pheres, helped their mother's revenge and were murdered by Corinthians for their crime. According to the tragic poet Euripides, Medea continued her revenge, murdering her two children Tisander and Alcimenes. Only one son, Thessalus, survived. Afterward, she left Corinth and flew to Athens in a golden chariot driven by dragons sent by her grandfather Helios, god of the sun.

Before the fifth century BC, there seem to have been two variants of the myth's conclusion. According to the poet Eumelus to whom the fragmentary epic Korinthiaka is usually attributed, Medea killed her children by accident.[7] The poet Creophylus, however, blamed their murders on the citizens of Corinth.[8] Medea's deliberate murder of her children, then, appears to be Euripides' invention although some scholars believe Neophron created this alternate tradition.[9] Her filicide would go on to become the standard for later writers.[10] Pausanias, writing in the late 2nd century AD, records five different versions of what happened to Medea's children after reporting that he has seen a monument for them while traveling in Corinth.[11]

Fleeing from Jason, Medea made her way to Thebes where she healed Heracles (the former Argonaut) from the curse of Hera (that led to the murder of Iphitus, his best friend). In return, Heracles gave her a place to stay in Thebes until the Thebans drove her out in anger, despite Heracles' protests.[citation needed]

She then fled to Athens where she met and married Aegeus. They had one son, Medus, although Hesiod makes Medus the son of Jason.[12] Her domestic bliss was once again shattered by the arrival of Aegeus' long-lost son, Theseus. Determined to preserve her own son's inheritance, Medea convinced her husband that Theseus was a threat and that he should be disposed of. As Medea handed Theseus a cup of poison, Aegeus recognized the young man's sword as his own, which he had left behind many years previously for his newborn son, to be given to him when he came of age. Knocking the cup from Medea's hand, Aegeus embraced Theseus as his own.

Medea then returned to Colchis and, finding that Aeëtes had been deposed by his brother Perses, promptly killed her uncle and restored the kingdom to her father. Herodotus reports another version, in which Medea and her son Medus fled from Athens on her flying chariot, to the Iranian plateau and lived among the Aryans, who then changed their name to the Medes.[13]

Though the early literary presentations of Medea are lost,[14] Apollonius of Rhodes, in a redefinition of epic formulas, and Euripides, in a dramatic version for a specifically Athenian audience, both employed the figure of Medea. Seneca offered yet another tragic Medea, of witchcraft and potions, and Ovid rendered her portrait three times for a sophisticated and sceptical audience in Imperial Rome. The gradual evolution undergone by the figure of Medea was the subject of a set of essays published in 1997.[15] Other, non-literary traditions guided the vase-painters,[16] and a localized, chthonic presence of Medea was propitiated with unrecorded emotional overtones at Corinth, at the sanctuary devoted to her slain children,[17] or locally venerated elsewhere as a foundress of cities.[18]

The dramatic episodes in which Medea plays a role have ensured that she remains vividly represented in popular culture.