The media of Turkey includes a wide variety of domestic and foreign periodicals expressing disparate views, and domestic newspapers are extremely competitive.[1] However, media ownership is concentrated in the hands of a few large private media groups which are typically part of wider conglomerates controlled by wealthy individuals, which limits the views that are presented.[1] In addition, the companies are willing to use their influence to support their owners' wider business interests, including by trying to maintain friendly relations with the government. The media exert a strong influence on public opinion.[1] Censorship in Turkey is also an issue, and in the 2000s Turkey has seen many journalists arrested and writers prosecuted. On Reporters without Borders' Press Freedom Index it has fallen from being ranked around 100 in 2005 to around 150 in 2013.

By circulation, the most popular daily newspapers are Zaman, Posta, Hürriyet, Sabah, Habertürk and Sözcü. Newspapers with oppositional editorial line against the government corresponds to 65% of daily newspapers in circulation while pro-government newspapers's share is 25%.[2][3] The broadcast media have a very high penetration as satellite dishes and cable systems are widely available.[1] The "Radio and Television Supreme Council" (RTÜK) is the government body overseeing the broadcast media.[1]

The largest operator is the Doğan Media Group, which in 2003 received 40 percent of the advertising revenue from newspapers and broadcast media in Turkey.[1] In 2003 a total of 257 television stations and 1,100 radio stations were licensed to operate, and others operated without licenses.[1] Of those licensed, 16 television and 36 radio stations reached national audiences.[1] In 2003 some 22.9 million televisions and 11.3 million radios were in service.[1] Aside from Turkish, the state television network offers some programs in Arabic, Circassian, Kurdish, and Zaza.[1]

In 2004 three major media groups dominated advertising revenues: Doğan Media Group and Sabah took 80% of newspaper advertising, and Doğan, Sabah and Çukurova took 70% of television advertising.[4] "In the Turkish context, highly concentrated corporate media power (such as Dogan’s) is even more significant when three additional factors are considered: (1) the willingness of corporate owners to ‘instrumentalize’ reporting in order to fit the wider political-economic interests of the parent company; (2) the weakness of journalists and other employees in the face of the power of corporate owners; and (3) the fact that corporate power is combined with restrictive state regulation on issues of freedom of speech."[4]

File:Ntv Van Media for sales.png
NTV broadcast van covered with protest graffiti during the 2013 protests in Turkey, in response to relative lack of coverage of mainstream media of the protests, 1 June 2013 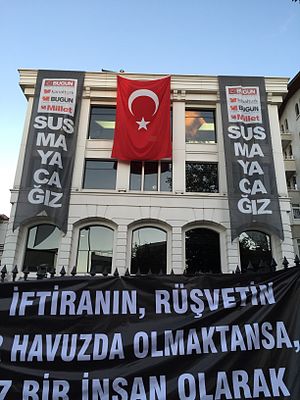 Since 2011, the AKP government has increased restrictions on freedom of speech, freedom of the press and internet use,[5] and television content,[6] as well as the right to free assembly.[7] It has also developed links with media groups, and used administrative and legal measures (including, in one case, a billion tax fine) against critical media groups and critical journalists: "over the last decade the AKP has built an informal, powerful, coalition of party-affiliated businessmen and media outlets whose livelihoods depend on the political order that Erdogan is constructing. Those who resist do so at their own risk."[8]

These behaviours became particularly prominent in 2013 in the context of the Turkish media coverage of the 2013 protests in Turkey. The BBC noted that while some outlets are aligned with the AKP or are personally close to Erdogan, "most mainstream media outlets - such as TV news channels HaberTurk and NTV, and the major centrist daily Milliyet - are loth to irritate the government because their owners' business interests at times rely on government support. All of these have tended to steer clear of covering the demonstrations."[9] Few channels provided live coverage – one that did was Halk TV.[10]

File:Yedi gazete tek manşet.jpg
Seven pro-AKP newspapers published with the same headline on 7 June 2013, during the 2013 protests in Turkey

During its 12-year rule, the ruling AKP has gradually expanded its control over media.[11] Today, numerous newspapers, TV channels and internet portals also dubbed as Yandaş Medya ("Slanted Media") or Havuz Medyası ("Pool Media") continue their heavy pro-government propaganda.[12] Several media groups receive preferential treatment in exchange for AKP-friendly editorial policies.[13] Some of these media organizations were acquired by AKP-friendly businesses through questionable funds and processes.[14] Media not friendly to AKP, on the other hand, are threatened with intimidation, inspections and fines.[15] These media group owners face similar threats to their other businesses.[16] An increasing number of columnists have been fired for criticizing the AKP leadership.[17][18][19][20]

Leaked telephone calls between high ranking AKP officials and businessmen indicate that government officials collected money from businessmen in order to create a "pool media" that will support support AKP government at any cost.[21][22] Arbitrary tax penalties are assessed to force newspapers into bankruptcy—after which they emerge, owned by friends of the president. According to a recent investigation by Bloomberg,[23] Erdogan forced a sale of the once independent daily Sabah to a consortium of businessmen led by his son-in-law.[24]

The state-run Anadolu Agency and the Turkish Radio and Television Corporation have also been criticized by media outlets and opposition parties, for acting more and more like a mouthpiece for the ruling AKP, a stance in stark violation of their requirement as public institutions to report and serve the public in an objective way.[25]

At the beginning of 1990s, workers of two major newspapers, Hürriyet and Milliyet, resigned from the union because of pressure from the employer (Aydin Dogan). Hostility from employers meant that some workplaces where there had been union organisation (including, for example, Tercüman, Günes, and the privately owned UBA news agency) were closed down. Union organisation was not possible in newspapers (Star, Radikal, and others) nor in radio and television companies which began their publication and broadcasting lives later on. The Sabah group and other media groups have never permitted union organisation. (IFJ/EFJ, 2002: 4)[4]

Turkey's 2001 financial crisis further strengthened media owners' hands, as 3-5000 journalists were fired, and the most troublesome ones targeted first.[4]