Media of the United States 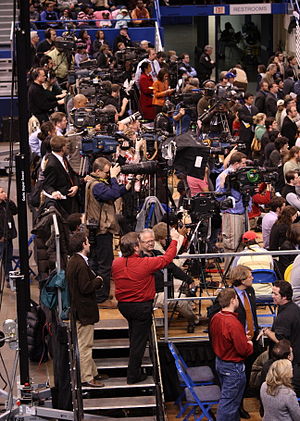 Media of the United States consist of several different types of media: television, radio, cinema, newspapers, magazines, and Internet-based Web sites. The U.S. also has a strong music industry. Many of the media are controlled by large for-profit corporations who reap revenue from advertising, subscriptions, and sale of copyrighted material. American media conglomerates tend to be leading global players, generating large revenues as well as large opposition in many parts of the world. With the passage of the Telecommunications Act of 1996, further deregulation and convergence are under way, leading to mega-mergers, further concentration of media ownership, and the emergence of multinational media conglomerates. These mergers enable tighter control of information.[1] Currently, six corporations control roughly 90% of the media.[2][3] Critics allege that localism, local news and other content at the community level, media spending and coverage of news, and diversity of ownership and views have suffered as a result of these processes of media concentration.[4]

Theories to explain the success of such companies include reliance on certain policies of the American federal government or a tendency to natural monopolies in the industry. See Media bias in the United States.

The organisation Reporters Without Borders compiles and publishes an annual ranking of countries based upon the organisation's assessment of their press freedom records. In 2013-14 United States was ranked 46th out of 180 countries, a drop of thirteen points from the preceding year.[5][6]

Talk radio as a political medium has also exploded in popularity during the 1990s, due to the 1987 repeal of the Fairness Doctrine, which meant that stations no longer had to "balance" their day by programming alternative points of view.[citation needed]

The Federal Communications Commission (FCC) in 1970 had limited the number of radio station one person or company could own to 1 am and 1 FM locally and 7 am and 7 FM stations nationally. See IBOC and HD Radio. A new form of radio that is gaining popularity is satellite radio. The two biggest subscriptions based radio services are Sirius Satellite Radio and XM Satellite Radio, which have recently merged to form Sirius XM Radio. Unlike terrestrial radio music channels are commercial free and other channels feature minimal commercials. Satellite radio also is not regulated by the FCC.

Arbitron, a consumer research company, provides ratings (similar to the Nielsen ratings) for national and local radio stations in the United States.

Public television has a far smaller role than in most other countries. However, a number of states, including West Virginia, Maryland, Kentucky, and South Carolina, among others, do have state-owned public broadcasting authorities which operate and fund all public television stations in their respective states. The income received from the government is insufficient to cover expenses and stations also rely on corporate sponsorships and viewer contributions.

DirecTV and Dish Network are the major satellite television providers, with 20 and 14 million customers respectively as of February 2014.[7] Meanwhile, the major cable television providers are Comcast with 22 million customers, Time Warner Cable with 11 million, and Cox Communications, Charter Communications, AT&T U-Verse and Verizon FiOS with 5-6 million each.

In the 20th century, the motion picture industry rose to become one of the most successful and powerful industries in the U.S. Along with other intellectual property industries, its relative importance to the American economy has strengthened as the importance of manufacturing and agriculture have decreased (due to globalization[citation needed]).

Newspapers have declined in their influence and penetration into American households over the years. The U.S. does not have a national paper. The New York Times and The Wall Street Journal are sold in most U.S. cities.[citation needed]

Although the Times' primary audience has always been the people of New York City, the New York Times has gradually become the dominant national "newspaper of record." Apart from its daily nationwide distribution, the term means that back issues are archived on microfilm by every decent-sized public library in the nation, and the Times' articles are often cited by both historians and judges as evidence that a major historical event occurred on a certain date. The Los Angeles Times and the Wall Street Journal are also newspapers of record to a lesser extent. Although USA Today has tried to establish itself as a national paper, it has been widely derided by the academic world as the "McPaper" and is not subscribed to (let alone archived) by most libraries.

Apart from the newspapers just mentioned, all major metropolitan areas have their own local newspapers. Typically, a metropolitan area will support at most one or two major newspapers, with many smaller publications targeted towards particular audiences. Although the cost of publishing has increased over the years, the price of newspapers has generally remained low, forcing newspapers to rely more on advertising revenue and on articles provided by a major wire service, such as the Associated Press or Reuters, for their national and world coverage.

With very few exceptions, all the newspapers in the U.S. are privately owned, either by large chains such as Gannett or McClatchy, which own dozens or even hundreds of newspapers; by small chains that own a handful of papers; or in a situation that is increasingly rare, by individuals or families.

Most general-purpose newspapers are either being printed one time a week, usually on Thursday or Friday, or are printed daily. Weekly newspapers tend to have much smaller circulation and are more prevalent in rural communities or small towns. Major cities often have "alternative weeklies" to complement the mainstream daily paper(s), for example, New York City's Village Voice or Los Angeles' L.A. Weekly, to name two of the best-known. Major cities may also support a local business journal, trade papers relating to local industries, and papers for local ethnic and social groups.

Probably due to competition from other media, the number of daily newspapers in the U.S. has declined over the past half-century, according to Editor & Publisher, the trade journal of American newspapers. In particular, the number of evening newspapers has fallen by almost one-half since 1970, while the number of morning editions and Sunday editions has grown.

Daily newspaper circulation is also slowly declining in America, partly due to the near-demise of two-newspaper towns, as the weaker newspapers in most cities have folded:

The primary source of newspaper income is advertising – in the form of "classifieds" or inserted advertising circulars – rather than circulation income. However, since the late 1990s, this revenue source has been directly challenged by Web sites like eBay (for sales of secondhand items), Monster.com (jobs), and Craigslist (everything).

Additionally, as investigative journalism declined at major daily newspapers in the 2000s, many reporters formed their own non-profit investigative newsrooms. Examples include ProPublica on the national level, Texas Tribune at the state level and Voice of OC at the local level.

The largest newspapers (by circulation) in the United States are USA Today, The Wall Street Journal, The New York Times and the Los Angeles Times.

See also: List of newspapers in the United States

Thanks to the huge size of the English-speaking North American media market, the United States has a large magazine industry with hundreds of magazines serving almost every interest, as can be determined by glancing at any newsstand in any large American city. Most magazines are owned by one of the large media conglomerates or by one of their smaller regional brethren.

The U.S. also has over a dozen major political magazines.

Finally, besides the hundreds of specialized magazines that serve the diverse interests and hobbies of the American people, there are also dozens of magazines published by professional organizations for their members, such as Communications of the ACM (for computer science specialists) and the ABA Journal (for lawyers).

The Internet has provided a means for newspapers and other media organizations to deliver news and, significantly, the means to look up old news. Some organizations only make limited amounts of their output available for free, and charge for access to the rest. Other organizations allow their archives to be freely browsed. It is possible that the latter type obtain more influence, as they are true to the spirit of freedom of information by virtue of making it free. Anyone who has followed external links only to be confronted with a pay to view banner, might attest that the reputations of organizations that charge is not enhanced by their charging policy, particularly when the same information is available from sources that don't charge.

The Internet, by means of making available such constantly growing news archives, is, in effect, writing our history as it happens, at a level of detail never before known. While proprietary archives are slowly exposed to the public after many decades, organizations that maintain immediately updating resources have more control over what will be remembered by the general public in the near future.