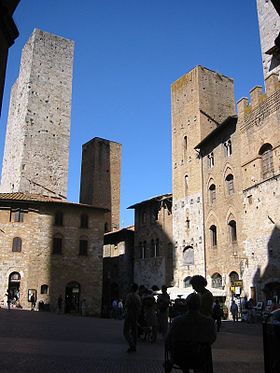 Medieval communes in the European Middle Ages had sworn allegiances of mutual defense (both physical defense and of traditional freedoms) among the citizens of a town or city. They took many forms, and varied widely in organization and makeup. Communes are first recorded in the late 11th and early 12th centuries, thereafter becoming a widespread phenomenon. They had the greater development in central-northern Italy, where they were real city-states based on partial democracy, while in Germany they became free cities, independent from local nobility.

During the 10th century in several parts of Western Europe, peasants began to gravitate towards walled population centers, as advances in agriculture (the three-field system) resulted in greater productivity and intense competition. In central and northern Italy, and in Provence and Septimania, most of the old Roman cities had survived—even if grass grew in their streets—largely as administrative centers for a diocese or for the local representative of a distant kingly or imperial power. In the Low Countries, some new towns were founded upon long-distance trade,[1] where the staple was the woolen cloth-making industry. The sites for these ab ovo towns, more often than not, were the fortified burghs of counts, bishops or territorial abbots. Such towns were also founded in the Rhineland. Other towns were simply market villages, local centers of exchange.

Such townspeople needed physical protection from lawless nobles and bandits, part of the motivation for gathering behind communal walls, but the struggle to establish their liberties, the freedom to conduct and regulate their own affairs and security from arbitrary taxation and harassment from the bishop, abbot, or count in whose jurisdiction these obscure and ignoble social outsiders lay, was a long process of struggling to obtain charters that guaranteed such basics as the right to hold a market. Such charters were often purchased at exorbitant rates, or granted, not by the local power, which was naturally jealous of prerogatives, but by the king or the emperor, who came thereby to hope to enlist the towns as allies in the struggle to centralize power that was arising in tandem with the rise of the communes. "The burghers of the tenth and eleventh centuries were ruthlessly harassed, blackmailed, subjected to oppressive taxes and humiliated. This drove the bourgeois back upon their own resources, and it accounts for the intensely corporate and excessively organized character of medieval cities."[2]

The walled city represented protection from direct assault at the price of corporate interference on the pettiest levels, but once a townsman left the city walls, he (for women scarcely travelled) was at the mercy of often violent and lawless nobles in the countryside. Because much of medieval Europe lacked central authority to provide protection, each city had to provide its own protection for citizens both inside the city walls, and outside. Thus towns formed communes, a legal basis for turning the cities into self-governing corporations. Although in most cases the development of communes was connected with that of the cities, there were rural communes, notably in France and England, that were formed to protect the common interests of villagers.

Every town had its own commune and no two communes were alike, but at their heart, communes were sworn allegiances of mutual defense. When a commune was formed, all participating members gathered and swore an oath in a public ceremony, promising to defend each other in times of trouble, and to maintain the peace within the city proper.

What did it mean for a commune member to defend another? If a commune member was attacked outside the city, it was too late to call for help, as it was unlikely anyone would arrive in time. Instead, the commune would promise to exact revenge on the attacker, the threat of revenge being a form of defense. However, if the attacker was a noble, safely ensconced in a castle (as was often the case), the town commune could not muster the forces to attack him directly. Instead they might attack the noble's family, burn his crops, kill his serfs, or destroy his orchards in retribution.

The commune movement started in the 10th century, with a few earlier ones like Forlì (possibly 889), and gained strength in the 11th century in northern Italy which had the most urbanized population of Europe at the time. It then spread in the early 12th century to France, Germany and Spain and elsewhere. The English state was already very centralized, so the communal movement mainly manifested itself in parishes, craftsmen's and merchants' guilds and monasteries. State officialdom expanded in England and France from the 12th century onwards, while the Holy Roman Empire was ruled by communal coalitions of cities, knights, farmer republics, prince-bishops and the large domains of the imperial lords.

Communes were very important for the medieval Church according to John Bossy.[3] The word that Bossy uses is fraternity. The Church had a main focus on establishing peace between the medieval states. The main sins that had to be overcome to stop the killing, according to many theologians, were pride, envy and wrath. Communes could help bring peace, because people would cooperate instead of acting egoistically. In many places, fraternities and guilds were formed before a parish was established. They were formed by common people who imitated the way of life of the monks, without becoming part of a monastical order. Another method to establish peace was the confession. Medieval confessions were of a somewhat different form from the modern-day practises in the Catholic Church; confessions were not yet auricular. Confession was instead held in public as opposed in the privacy of a confessional. The main theme was expressing sins committed against neighbours.[citation needed] Forgiveness was asked not merely from God and the Church, but also from one's neighbours. The 15th century brought a positive view on individualism expressed in the humanist movement of the Renaissance. Rising commerce was the cause of this individualism. Communalism has remained very popular within and without Christianity until this day.

According to an English cleric of the late 10th century, society was composed of the three orders: those who fight (the nobles), those who pray (the clergy) and those who work (the peasants). In theory this was a balance between spiritual and secular peers, with the third order providing labour for the other two. The urban communes were a break in this order. The Church and King both had mixed reactions to communes. On the one hand, they agreed safety and protection from lawless nobles was in everyone's best interest. The communes intention was to keep the peace through the threat of revenge, and the Church was sympathetic to the end result of peace. However, the Church had their own ways to enforce peace, such as the Peace and Truce of God movement, for example. On the other hand, communes disrupted the order of medieval society; the methods the commune used, eye for an eye, violence begets violence, were generally not acceptable to Church or King. Furthermore, there was a sense that communes threatened the medieval social order. Only the noble lords were allowed by custom to fight, and ostensibly the merchant townspeople were workers, not warriors. As such, the nobility and the clergy sometimes accepted communes, but other times did not. One of the most famous cases of a commune being suppressed and the resulting defiant urban revolt occurred in the French town of Laon in 1112.

The development of medieval rural communes arose more from a need to collaborate to manage the commons than out of defensive needs. In times of a weak central government, communes typically formed to ensure the safety on the roads through their territory to enable commerce (Landfrieden). Perhaps the most successful such medieval community was the one in the alpine valleys north of the Gotthard Pass: it later resulted in the formation of the Old Swiss Confederacy. The Swiss had numerous written acts of alliance: for each new canton that joined the confederacy, a new contract was written. Besides the Swiss Eidgenossenschaft, there were similar rural alpine communes in County of Tyrol, but these were quenched by the House of Habsburg. Other such rural communes developed in the Graubünden, in the French Alps (Briançon), in the Pyrenees, in northern France (Roumare), in northern Germany (Frisia and Dithmarschen), and also in Sweden and Norway. The colonization of the Walser also is related. The southern medieval communes most probably were influenced by the Italian precedent, but the northern ones (and even the Swiss communes north of Gotthard Pass) may well have developed concurrently and independently from the Italian ones. Only very few of these medieval rural communes ever attained imperial immediacy, where they would have been subject only to the king or emperor; most still remained subjects of some more or less distant liege.[4]

Evolution in Italy and decline in Europe

During the 11th century in northern Italy a new political and social structure emerged and the medieval communes developed to the form of city states. The civic culture which arose from this urbs was remarkable. In most places where communes arose (e.g. France, Britain and Flanders) they were absorbed by the monarchical state as it emerged. Almost uniquely, they survived in northern and central Italy to become independent and powerful city-states. The breakaway from their feudal overlords by these communes occurred in the late 12th century and 13th century, during the Investiture Controversy between the Pope and the Holy Roman Emperor: Milan led the Lombard cities against the Holy Roman Emperors and defeated them, gaining independence (battles of Legnano, 1176, and Parma, 1248 - see Lombard League). Meanwhile the Republic of Venice, Pisa and Genoa were able to conquer their naval empires on the Mediterranean sea (in 1204 Venice conquered one-fourth of Byzantine Empire in the Fourth Crusade). Cities such as Parma, Ferrara, Verona, Padua, Lucca, Siena, Mantua and others were able to create stable states at the expenses of their neighbors, some of which lasted until modern times. In southern and insular Italy, autonomous communes were rarer, Sassari in Sardinia being one example.

In the Holy Roman Empire, the emperors always had to face struggles with other powerful players: the land princes on the one hand, but also the cities and communes on the other hand. The emperors thus invariably fought political (not always military) battles to strengthen their position and that of the imperial monarchy. In the Golden Bull of 1356, emperor Charles IV outlawed any conjurationes, confederationes, and conspirationes, meaning in particular the leagues of towns but also the rural communal leagues that had sprung up. Most leagues of towns were subsequently dissolved, sometimes forcibly, and where refounded, their political influence was much reduced. Nevertheless some of this communes (as Frankfurt, Nuremberg, Hamburg) were able to survive in Germany for centuries and became almost independent city-states vassals to the Holy Roman Emperors (see Free imperial city).

Histories of specific communes are found under the names of their cities or locales.