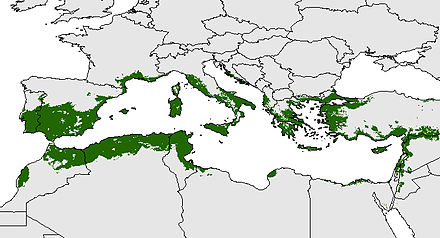 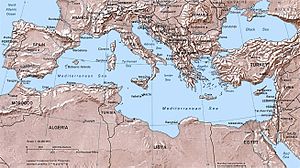 Political Map of the Mediterranean Basin

It has a varied and contrasting topography. The Mediterranean Region offers an ever changing landscape of high mountains, rocky shores, impenetrable scrub, semi-arid steppes, coastal wetlands, sandy beaches and a myriad islands of various shapes and sizes dotted amidst the clear blue sea. Contrary to the classic sandy beach images portrayed in most tourist brochures, the Mediterranean is surprisingly hilly. Mountains can be seen from almost anywhere.[2]

The Mediterranean Basin extends into Western Asia, covering the western and southern portions of the peninsula of Turkey, excluding the temperate-climate mountains of central Turkey. It includes the Mediterranean climate Levant at the eastern end of the Mediterranean, bounded on the east and south by the Syrian and Negev deserts.

Köppen-Geiger-based map of the areas surrounding the Mediterranean Sea.[citation needed] Based on the work of M. C. Peel, B.L. Finlayson and T.A. McMahon at the University of Melbourne.[citation needed] For explanation of the colors see the image file "World_Koppen_Map.png" at Wikimedia Commons.

The Mediterranean Basin was shaped by the ancient collision of the northward-moving African-Arabian continent with the stable Eurasian continent. As Africa-Arabia moved north, it closed the former Tethys Sea, which formerly separated Eurasia from the ancient super continent of Gondwana, of which Africa was part. At about the same time, 170 mya in the Jurassic period, a small Neotethys ocean basin formed shortly before the Tethys Sea was closed at the eastern end. The collision pushed up a vast system of mountains, extending from the Pyrenees in Spain to the Zagros Mountains in Iran. This episode of mountain building, known as the Alpine orogeny, occurred mostly during the Oligocene (34 to 23 million years ago (mya)) and Miocene (23 to 5.3 mya) epochs. The Neotethys became larger during these collisions and associated folding and subduction.

About 6 mya during the late Miocene, the Mediterranean was closed at its western end by drifting Africa, which caused the entire sea to evaporate. There followed several (debated) episodes of sea drawdown and re-flooding known as the Messinian Salinity Crisis, which ended when the Atlantic last re-flooded the basin at the end of the Miocene.[3] Recent research has suggested that a desiccation-flooding cycle may have repeated several times [4][5] during the last 630,000 years of the Miocene epoch, which could explain several events of large amounts of salt deposition. Recent studies, however, show that repeated desiccation and re-flooding is unlikely from a geodynamic point of view. [6][7]

The end of the Miocene also marked a change in the Mediterranean Basin's climate. Fossil evidence shows that the Mediterranean Basin had a relatively humid subtropical climate with summer rainfall during the Miocene, which supported laurel forests. The shift to a Mediterranean climate occurred within the last 3.2–2.8 million years, during the Pliocene epoch, as summer rainfall decreased. The subtropical laurel forests retreated, although they persisted on the islands of Macaronesia off the Atlantic coast of Iberia and North Africa, and the present Mediterranean vegetation evolved, dominated by coniferous trees and sclerophyllous trees and shrubs, with small, hard, waxy leaves that prevent moisture loss in the dry summers. Much of these forests and shrublands have been altered beyond recognition by thousands of years of human habitation. There are now very few relatively intact natural areas in what was once a heavily wooded region.

The Mediterranean Region was first proposed by German botanist August Grisebach in the late 19th century.

Drosophyllaceae, recently segregated from Droseraceae, is the only plant family endemic to the region. Among the endemic plant genera are:

The Mediterranean Basin is the largest of the world's five Mediterranean forests, woodlands, and scrub regions. It is home to a number of plant communities, which vary with rainfall, elevation, latitude, and soils.

The most recent glacial period, the Wisconsin glaciation, reached its maximum extent approximately 21,000 years ago, and ended approximately 12,000 years ago. A warm period, known as the Holocene climatic optimum, followed the ice age.

Food crops, including wheat, chickpeas, and olives, along with sheep and goats, were domesticated in the eastern Mediterranean in the 9th millennium BCE, which allowed for the establishment of agricultural settlements. Near Eastern crops spread to southeastern Europe in the 7th millennium BCE. Poppy and oats were domesticated in Europe from the 6th to the 3rd millennium BCE. Agricultural settlements spread around the Mediterranean Basin. Megaliths were constructed in Europe from 4500 – 1500 BCE.

A strengthening of the summer monsoon 9000–7000 years ago increased rainfall across the Sahara, which became a grassland, with lakes, rivers, and wetlands. After a period of climatic instability, the Sahara settled into a desert state by the 4th millennium BCE.

Wheat is the dominant grain grown around the Mediterranean Basin. Pulses and vegetables are also grown. The characteristic tree crop is the olive. Figs are another important fruit tree, and citrus, especially lemons, are grown where irrigation is present. Grapes are an important vine crop, grown for fruit and to make wine. Rice and summer vegetables are grown in irrigated areas.