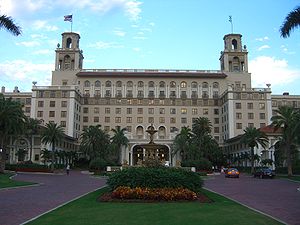 The Breakers Hotel in Palm Beach, Florida is a grand example of Mediterranean Revival style

Peaking in popularity during the 1920s and 1930s, the movement drew heavily on the style of palaces and seaside villas and applied them to the rapidly expanding coastal resorts of California and Florida.

Structures are typically based on a rectangular floor plan, and feature massive, symmetrical primary façades. Stuccoed walls, red tiled roofs, windows in the shape of arches or circles, one or two stories, wood or wrought iron balconies with window grilles, and articulated door surrounds are characteristic.[1][2] Keystones were occasionally employed. Ornamentation may be simple or dramatic. Lush gardens often appear.

The style was most commonly applied to hotels, apartment buildings, commercial structures, and residences. Architects August Geiger and Addison Mizner were foremost in Florida, while Bertram Goodhue, Sumner Spaulding, and Paul Williams were in California.[citation needed] 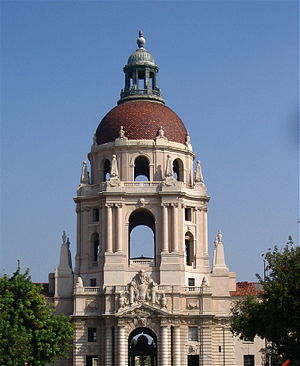 Elaborate Pasadena City Hall in Pasadena, California is also an example of the grandeur of the City Beautiful fashion