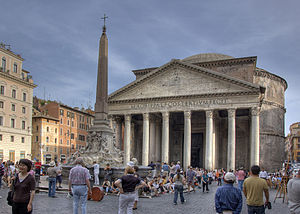 The Pantheon, a surviving architecture of the Roman Empire, and a symbol of its civilization.

Mediterraneanism is an ideology that claims that there are distinctive characteristics that Mediterranean cultures have in common.[1]

Since the end of the Cold War, Mediterraeanism or Mediterranean regionalism refers to the existence of a shared culture in the Mediterranean. It is a term that has become widespread in marketing lingo and the branding of restaurants.[4]

Sergi rejected Nordicism's claims of Nordic peoples being strongly Aryan, saying that Aryans were not Nordic in appearance.[2]:24–27 Instead he claimed that Nordics were "Aryanized Euroafricans", and that the Nordic race is related to Mediterranean race.[2]:24–27 Sergi responded to typical Nordicist claims of superiority of Nordics over Mediterraneans, by saying that the reason for the lack of wealth or progress in Latin countries as compared with countries of Northern Europe was because the Aryans of the North, including northern Italians, living in frigid climates had developed close-knit groups that allowed them to survive in that environment, as such they became more disciplined, productive civic-minded than southern Italians.[2]:24–27 Because of this, Sergi claimed that the northern Italians, whom he identified as having significant Aryan heritage, were more advanced than southern Italians.[2]:24–27 However Sergi rejected claims that Aryans who were a Euroasian people were responsible for founding Greco-Latin civilization. Sergi described the original Aryans in Europe in a negative manner: "The Aryans were savages when they invaded Europe: they destroyed in part the superior civilization of the Neolithic populations, and could not have created the Greco-Latin civilization".[2]:24–27 Sergi claimed that the only contribution by the ancient Aryans to European civilization was Indo-European languages.[2]:24–27 He claimed that the ancient Aryans interbred with the Mediterranean race north of the Po Valley but declined south of it and became insignificant south of Rome.[2]:24–27 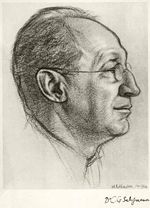 C. G. Seligman supported Mediterraneanist claims, stating "it must, I think, be recognized that the Mediterranean race has actually more achievement to its credit than any other, since it is responsible for by far the greater part of Mediterranean civilization, certainly before 1000 B.C. (and probably much later), and so shaped not only the Aegean cultures, but those of Western as well as the greater part of Eastern Mediterranean lands, while the culture of their near relatives, the Hamitic pre-dynastic Egyptians, formed the basis of that of Egypt."[5]

French historian Fernand Braudel in the 1920s invoked the conception of the Mediterraneanism including claims of Mediterranean universalism to justify French colonialism in Algeria.[6] Braudel had entered his doctrinal studies in the 1920s at the precise time when the issue of Mediterranean unity was being fiercely debated.[6] Braudel supported the pro-unity argument.[6] The argument for Mediterranean unity justified French colonialism in Algeria and viewed the Berbers in a place of privilege amongst the peoples of Africa, as retainers of the lost Roman legacy in Africa.[6] It was claimed that if the Berbers could be culturally separated from the Arabo-Islamic surrounding culture, that the Berbers would become natural allies of the French through their Mediterranean heritage that would challenge anti-colonial sentiment.[6]

File:Mussolini mezzobusto.jpg
Benito Mussolini was initially a strong proponent of Mediterraneanism, however with the rise in influence of pro-Nordicist Nazism, he promoted Aryanism and recognized Italians as having Nordic-Mediterranean heritage.

In a 1921 speech in Bologna, Benito Mussolini stated that "Fascism was born... out of a profound, perennial need of this our Aryan and Mediterranean race".[2]:11[7] In this speech Mussolini was referring to Italians as being the Mediterranean branch of the Indo-European Aryan race, in the sense of people of an Indo-European heritage rather than in the more famous Nordicist sense that was promoted by the Nazis.[2]:39 Italian Fascism emphasized that race was bound by spiritual and cultural foundations, and identified a racial hierarchy based on spiritual and cultural factors.[2]:39 Mussolini explicitly rejected notions that biologically "pure" races existed in modern times.[8]

Italian Fascism strongly rejected the Nordicist conception of the Aryan race that idealized "pure" Aryans as having certain physical traits that were defined as Nordic such as fair skin, blond hair and blue eyes, traits uncommon among Mediterranean and Italian people and the often olive-skinned members of the so-called "Mediterranean race."[2]:188 The antipathy by Mussolini and other Italian Fascists to Nordicism was over the existence of such theories by German and Anglo-Saxon Nordicists who viewed Mediterranean peoples as racially degenerate.[2]:188 Nordicism and biological racism were often considered incompatible with the early Italian fascist philosophy; Nordicism inherently subordinated Italians and other Mediterranean people beneath the Germans and Northwestern Europeans in its proposed racial hierarchy, and early Italian fascists, including Mussolini, often viewed race as a cultural and political invention rather than a biological reality or saw physical race as something that could be overcome through culture.[3] In a speech given in Bari in 1934, Mussolini reiterated his attitude toward Nordicism: "Thirty centuries of history allow us to look with supreme pity on certain doctrines which are preached beyond the Alps by the descendants of those who were illiterate when Rome had Caesar, Virgil and Augustus".[9]

In 1938, mere months before creating the Pact of Steel alliance with Nazi Germany, the Fascist government created the Italian Racial Laws and officially but gradually recognized and embraced the racial myth of Italians having Nordic heritage and being of Nordic-Mediterranean descent. According to the Diary of Giuseppe Bottai, in a meeting with Fascist Party members, Mussolini declared that previous policy of focus on Mediterraneanism was to be replaced by a focus on Aryanism.[2]:188 Both Italian historian Renzo De Felice in his book La storia degli ebrei italiani sotto il fascismo (1961) and William Shirer in The Rise and Fall of the Third Reich (1960) suggest that Mussolini enacted the Italian Racial Laws and turned towards Nazi racial theories partially to appease his Nazi German allies, rather than to satisfy a genuine anti-Semitic sentiment among the Italian people.[3]

With the rise in influence of pro-Nordicist Nazi Germany in Europe, and as the Fascist Italian regime sought unity with Nazi Germany, the Fascist regime gave Italian Nordicists prominent positions in the National Fascist Party (PNF), which aggravated the original Mediterraneanists in the party.[2]:188, 168, 146 Prominent Nordicists such as Julius Evola rejected Mediterraneanism and, in particular, Evola denounced Sergi's association of Europeans with Africans as "dangerous".[2]:168 Evola rejected biological determinism for race but was a supporter of spiritual Nordicism.[2]:168 In direct contradiction of the earlier or original forms of Mediterraneanism that embraced the idea of a shared origin or culture among all people of the Mediterranean, the Manifesto of Racial Scientists (1938) declared that Mediterranean Europeans were distinct from Mediterranean Africans and Mediterranean Asians and rejected claims that European Mediterraneans were related to the Mediterranean Semitic or Hamitic peoples.[12]

In 1941, the PNF's Mediterraneanists, through the influence of Giacomo Acerbo, put forward a comprehensive definition of the Italian race.[2]:146 However these efforts were challenged by Mussolini's endorsement of Nordicist figures with the appointment of staunch spiritual Nordicist Alberto Luchini as head of Italy's Racial Office in May 1941, as well as with Mussolini becoming interested with Evola's spiritual Nordicism in late 1941.[2]:146 Acerbo and the Mediterraneanists in his High Council on Demography and Race sought to bring the regime back to supporting Mediterraneanism by thoroughly denouncing the pro-Nordicist Manifesto of the Racial Scientists.[2]:146 The Council recognized Aryans as being a linguistic-based group, and condemned the Manifesto for denying the influence of pre-Aryan civilization on modern Italy, saying that the Manifesto "constitutes an unjustifiable and undemonstrable negation of the anthropological, ethnological, and archaeological discoveries that have occurred and are occurring in our country".[2]:146 Furthermore, the Council denounced the Manifesto for "implicitly" crediting Germanic invaders of Italy in the guise of the Lombards for having "a formative influence on the Italian race in a disproportional degree to the number of invaders and to their biological predominance".[2]:146 The High Council claimed that the obvious superiority of the ancient Greeks and Romans in comparison with the ancient Germanic tribes made it inconceivable that Italian culture owed a debt to ancient Germans.[2]:146