From Infogalactic: the planetary knowledge core
Jump to: navigation, search
For other uses, see Medusa (disambiguation).

In Greek mythology Medusa (/məˈdjuːzə, məˈdʒuː-, -sə/, US /məˈduː-/; Μέδουσα "guardian, protectress")[1] was a monster, a Gorgon, generally described as a winged human female with a hideous face and living venomous snakes in place of hair. Gazers on her face would turn to stone. Most sources describe her as the daughter of Phorcys and Ceto,[2] though the author Hyginus (Fabulae Preface) makes Medusa the daughter of Gorgon and Ceto.[3] According to Hesiod and Aeschylus, she lived and died on an island named Sarpedon, somewhere near Cisthene. The 2nd-century BCE novelist Dionysios Skytobrachion puts her somewhere in Libya, where Herodotus had said the Berbers originated her myth, as part of their religion.

Medusa was beheaded by the hero Perseus, who thereafter used her head, which retained its ability to turn onlookers to stone, as a weapon[4] until he gave it to the goddess Athena to place on her shield. In classical antiquity the image of the head of Medusa appeared in the evil-averting device known as the Gorgoneion. 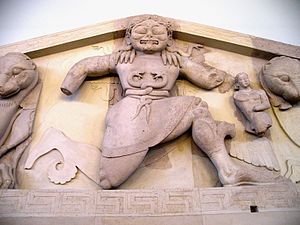 An archaic Medusa wearing the belt of the intertwined snakes, a fertility symbol, as depicted on the west pediment of the Artemis Temple in Corfu, exhibited at the Archaeological Museum of Corfu

The three Gorgon sisters—Medusa, Stheno, and Euryale—were all children of the ancient marine deities Phorcys (or "Phorkys") and his sister Ceto (or "Keto"), chthonic monsters from an archaic world. Their genealogy is shared with other sisters, the Graeae, as in Aeschylus's Prometheus Bound, which places both trinities of sisters far off "on Kisthene's dreadful plain":

Near them their sisters three, the Gorgons, winged
With snakes for hair— hatred of mortal man—

While ancient Greek vase-painters and relief carvers imagined Medusa and her sisters as beings born of monstrous form, sculptors and vase-painters of the fifth century began to envisage her as being beautiful as well as terrifying. In an ode written in 490 BC Pindar already speaks of "fair-cheeked Medusa".[5]

In a late version of the Medusa myth, related by the Roman poet Ovid (Metamorphoses 4.770), Medusa was originally a ravishingly beautiful maiden, "the jealous aspiration of many suitors," but because Poseidon had raped her in Athena's temple, the enraged Athena transformed Medusa's beautiful hair to serpents and made her face so terrible to behold that the mere sight of it would turn onlookers to stone.[6] In Ovid's telling, Perseus describes Medusa's punishment by Minerva (Athena) as just and well earned.

In most versions of the story, she was beheaded by the hero Perseus, who was sent to fetch her head by King Polydectes of Seriphus because Polydectes wanted to marry his mother. The gods were well aware of this, and Perseus received help. He received a mirrored shield from Athena, gold, winged sandals from Hermes, a sword from Hephaestus and Hades's helm of invisibility. Since Medusa was the only one of the three Gorgons who was mortal, Perseus was able to slay her while looking at the reflection from the mirrored shield he received from Athena. During that time, Medusa was pregnant by Poseidon. When Perseus beheaded her, Pegasus, a winged horse, and Chrysaor, a golden sword-wielding giant, sprang from her body.

Jane Ellen Harrison argues that "her potency only begins when her head is severed, and that potency resides in the head; she is in a word a mask with a body later appended... the basis of the Gorgoneion is a cultus object, a ritual mask misunderstood."[7]

In the Odyssey xi, Homer does not specifically mention the Gorgon Medusa:

Lest for my daring Persephone the dread,

From Hades should send up an awful monster's grisly head. 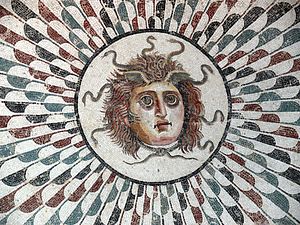 The Medusa's head central to a mosaic floor in a tepidarium of the Roman era. Museum of Sousse, Tunisia

According to Ovid, in northwest Africa, Perseus flew past the Titan Atlas, who stood holding the sky aloft, and transformed him into stone when he tried to attack him.[8] In a similar manner, the corals of the Red Sea were said to have been formed of Medusa's blood spilled onto seaweed when Perseus laid down the petrifying head beside the shore during his short stay in Ethiopia where he saved and wed his future wife, the lovely princess Andromeda. Furthermore, the poisonous vipers of the Sahara, in the Argonautica 4.1515, Ovid's Metamorphoses 4.770 and Lucan's Pharsalia 9.820, were said to have grown from spilt drops of her blood. The blood of Medusa also spawned the Amphisbaena (a horned dragon-like creature with a snake-headed tail).

Perseus then flew to Seriphos, where his mother was about to be forced into marriage with the king. King Polydectes was turned into stone by the gaze of Medusa's head. Then Perseus gave the Gorgon's head to Athena, who placed it on her shield, the Aegis.[9]

Some classical references refer to three Gorgons; Harrison considered that the tripling of Medusa into a trio of sisters was a secondary feature in the myth:

The triple form is not primitive, it is merely an instance of a general tendency... which makes of each woman goddess a trinity, which has given us the Horae, the Charites, the Semnai, and a host of other triple groups. It is immediately obvious that the Gorgons are not really three but one + two. The two unslain sisters are mere appendages due to custom; the real Gorgon is Medusa.[7] 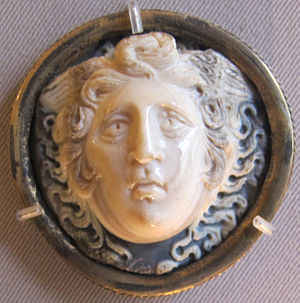 A Roman cameo of the 2nd or 3rd century

A number of early classics scholars interpreted the myth of the Medusa as a quasi-historical, or "sublimated" memory of an actual invasion.[10][11]

"The legend of Perseus beheading Medusa means, specifically, that 'the Hellenes overran the goddess's chief shrines' and 'stripped her priestesses of their Gorgon masks,' the latter being apotropaic faces worn to frighten away the profane. 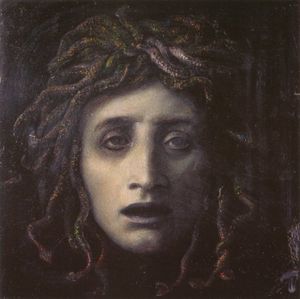 Medusa by Arnold Böcklin, circa 1878

In 1940, Sigmund Freud's Das Medusenhaupt (Medusa's Head) was published posthumously. This article laid the framework for his significant contribution to a body of criticism surrounding the monster. Medusa is presented by Freud as "the supreme talisman who provides the image of castration — associated in the child's mind with the discovery of maternal sexuality — and its denial."[13] Psychoanalysis continue archetypal literary criticism to the present day: Beth Seelig analyzes Medusa's punishment from the aspect of the crime of having been raped rather than having willingly consented in Athena's temple as an outcome of the goddess' unresolved conflicts with her own father, Zeus.[14]

In the 20th century, feminists reassessed Medusa's appearances in literature and in modern culture, including the use of Medusa as a logo by fashion company Versace.[15][16][17][18] The name "Medusa" itself is often used in ways not directly connected to the mythological figure but to suggest the gorgon's abilities or to connote malevolence; despite her origins as a beauty, the name in common usage "came to mean monster."[19] The book Female Rage: Unlocking Its Secrets, Claiming Its Power by Mary Valentis and Anne Devane notes that "When we asked women what female rage looks like to them, it was always Medusa, the snaky-haired monster of myth, who came to mind ... In one interview after another we were told that Medusa is 'the most horrific woman in the world' ... [though] none of the women we interviewed could remember the details of the myth."[20] 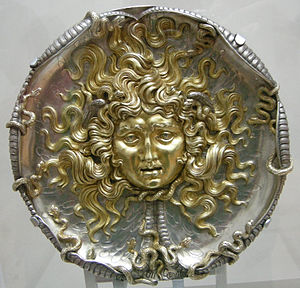 An embossed plaque in the Art Nouveau style from 1911

Medusa's visage has since been adopted by many women as a symbol of female rage; one of the first publications to express this idea was a feminist journal called Women: A Journal of Liberation in their issue one, volume six for 1978. The cover featured the image of the Gorgon Medusa by Froggi Lupton, which the editors on the inside cover explained "can be a map to guide us through our terrors, through the depths of our anger into the sources of our power as women."[20]

In issue three, Fall 1986 for the magazine Woman of Power an article called Gorgons: A Face for Contemporary Women's Rage, appeared, written by Emily Erwin Culpepper, who wrote that "The Amazon Gorgon face is female fury personified. The Gorgon/Medusa image has been rapidly adopted by large numbers of feminists who recognize her as one face of our own rage."[20] Griselda Pollock analyses the passage from horrorism to compassion in the figure of the Medusa through Adriana Cavarero's philosophy and Bracha Ettinger's art and Matrixial theory.[21]

Medusa has sometimes appeared as representing notions of scientific determinism and nihilism, especially in contrast with romantic idealism.[22][23] In this interpretation of Medusa, attempts to avoid looking into her eyes represent avoiding the ostensibly depressing reality that the universe is meaningless. Jack London uses Medusa in this way in his novel The Mutiny of the Elsinore:[24]

I cannot help remembering a remark of De Casseres. It was over the wine in Mouquin's. Said he: "The profoundest instinct in man is to war against the truth; that is, against the Real. He shuns facts from his infancy. His life is a perpetual evasion. Miracle, chimera and to-morrow keep him alive. He lives on fiction and myth. It is the Lie that makes him free. Animals alone are given the privilege of lifting the veil of Isis; men dare not. The animal, awake, has no fictional escape from the Real because he has no imagination. Man, awake, is compelled to seek a perpetual escape into Hope, Belief, Fable, Art, God, Socialism, Immortality, Alcohol, Love. From Medusa-Truth he makes an appeal to Maya-Lie."

— Jack London, The Mutiny of the Elsinore 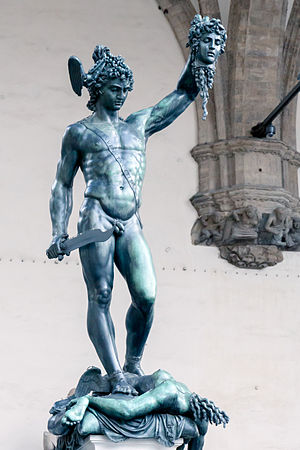 Perseus with the head of Medusa, Benvenuto Cellini (1554)
Main article: Cultural depictions of Medusa and Gorgons

From ancient times, the Medusa was immortalized in numerous works of art, including:

Medusa remained a common theme in art in the nineteenth century, when her myth was retold in Thomas Bulfinch's Mythology. Edward Burne-Jones' Perseus Cycle of paintings and a drawing by Aubrey Beardsley gave way to the twentieth century works of Paul Klee, John Singer Sargent, Pablo Picasso, Pierre et Gilles, and Auguste Rodin's bronze sculpture The Gates of Hell.[25]

In flags and emblems

The head of Medusa is featured on some regional symbols. One example is that of the flag and emblem of Sicily, together with the three legged trinacria. The inclusion of Medusa in the center implies the protection of the goddess Athena, who wore the Gorgon's likeness on her aegis, as said above. Another example is the coat of arms of Dohalice village in the Czech Republic.

Medusa is honored in the specific names of two species of snakes: Bothriopsis medusa, a venomous pitviper; and Atractus medusa, a nonvenomous snake.[26]

The petrifying image of Medusa makes an instantly recognizable feature in popular culture. Medusa has been featured in several works of fiction, including video games, movies, cartoons and books. In particular, the designer Gianni Versace's symbol is reflected through the Medusa-head symbol. It was chosen because she represents beauty, art, and philosophy.[27]