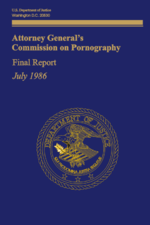 The final report of the Attorney General's Commission on Pornography (usually referred to as (the) Meese Report, for U.S. Attorney General Edwin Meese) is the result of a comprehensive investigation into pornography ordered by U.S. President Ronald Reagan. It was published in July 1986 and contains 1,960 pages.

The following people composed the commission (nicknamed The Meese Commission):

The "Meese Report" was preceded by the report of presidents Lyndon B. Johnson's and Richard Nixon's Commission on Obscenity and Pornography, which was published in 1970 and recommended loosening the legal restrictions on pornography.