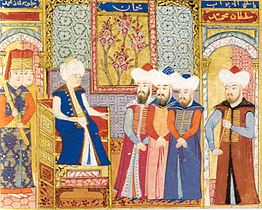 Mehmed I with his dignitaries. Ottoman miniature painting, kept at Istanbul University.

Mehmed I (Bursa 1381 – Edirne 26 May 1421), also known as Mehmed Çelebi (Ottoman Turkish: چلبی محمد‎, "the noble-born") or Kirişci (from Greek Kyrtzes, "young lord"),[1] was the Ottoman Sultan from 1413 to 1421. The fourth son of Sultan Bayezid I and Devlet Hatun, he fought with his brothers over control of the Ottoman realm in the Ottoman Interregnum (1402–1413). Starting from the province of Rûm he managed to bring first Anatolia and then the European territories (Rumelia) under his control, reuniting the Ottoman state by 1413, and ruling it until his death in 1421.

Mehmed was born in 1386 or 1387 as the fourth son of Sultan Bayezid I (r. 1389–1402) and one of his wives, the slave girl Devlet Hatun.[1] Following Ottoman custom, when he reached adolescence in 1399, he was sent to gain experience as provincial governor over the Rûm Eyalet (central northern Anatolia), recently conquered from its Eretnid rulers.[2]

On 20 July 1402, his father Bayezid was defeated in the Battle of Ankara by the Turko-Mongol conqueror and ruler Timur. The brothers (with the exception of Mustafa, who was captured and taken along with Bayezid to Samarkand) were rescued from the battlefield, Mehmed being saved by Bayezid Pasha, who took him to his hometown of Amasya. Mehmed later made Bayezid Pasha his grand vizier (1413–1421).

The early Ottoman empire had no regulated succession, and according to Turkish tradition, every son could succeed his father.[3] Of Mehmed's brothers, the eldest, Ertuğrul, had died in 1400, while the next in line, Mustafa, was a prisoner of Timur. Leaving aside the underage siblings, this left four princes—usually called by the title Çelebi—Mehmed, Süleyman, İsa, and Musa, to contend over control of the remaining Ottoman territories in the civil war known as the "Ottoman Interregnum".[3]

After winning the Interregnum, Mehmed crowned himself sultan in the Thracian city of Edirne that lay in the European part of the empire (the area dividing the Anatolian and European sides of the empire, Constantinople and the surrounding region, was still held by the Byzantine Empire), becoming Mehmed I. He consolidated his power, made Edirne the most important of the dual capitals , and conquered parts of Albania, the Jandarid emirate, and the Armenian Kingdom of Cilicia from the Mamelukes. Taking many of his achievements into consideration, Mehmed is widely known as the "second founder" of the Ottoman Sultanate.

Soon after Mehmed began his reign, his brother Mustafa Çelebi, who had originally been captured along with their father Bayezid I during the Battle of Ankara and held captive in Samarkand, hiding in Anatolia during the Interregnum, reemerged and asked Mehmed to partition the empire with him. Mehmed refused and met Mustafa's forces in battle, easily defeating them. Mustafa escaped to the Byzantine city of Thessaloniki, but after an agreement with Mehmed, the Byzantine emperor Manuel II Palaiologos exiled Mustafa to the island of Lemnos.

However, Mehmed still faced some problems, first being the problem of his nephew Orhan, who Mehmed perceived as a threat to his rule, much like his late brothers had been. There was allegedly a plot involving him by Manuel II Palaiologos, who tried to use Orhan against Sultan Mehmed; however, the sultan found out about the plot and had Orhan blinded for betrayal, according to a common Byzantine practice.

Furthermore, as a result of the Battle of Ankara and other civil wars, the population of the empire had become unstable and traumatized. A very powerful social and religious movement arose in the empire and became disruptive. The movement was by Sheikh Bedreddin (1359–1420), a famous Muslim Sufi and charismatic theologian. He was an eminent Ulema, born of a Greek mother and a Muslim father in Simavna (Kyprinos) southwest of Edirne (formerly Adrianople). Mehmed's brother Musa had made Bedreddin his "qadi of the army," or the supreme judge. Bedreddin created a populist religious movement in the Ottoman Sultanate, "subversive conclusions promoting the suppression of social differences between rich and poor as well as the barriers between different forms of monotheism."[4] Successfully developing a popular social revolution and syncretism of the various religions and sects of the empire, Bedreddin's movement began in the European side of the empire and underwent further expansion in western Anatolia.

In 1416, Sheikh Bedreddin started his rebellion against the throne. After a four-year struggle, he was finally captured by Mehmed's grand vizier Bayezid Pasha and hanged in the city off Serres, a city in modern-day Greece, in 1420.[5]

The reign of Mehmed I as sultan of the re-united empire lasted only eight years before his death, but he had also been the most powerful brother contending for the throne and de facto ruler of most of the empire for nearly the whole preceding period of 11 years of the Ottoman Interregnum that passed between his father's captivity at Ankara and his own final victory over his brother Musa Çelebi at the Battle of Çamurlu.

He was buried in Bursa, in a mausoleum erected by himself near the celebrated mosque which he built there, and which, because of its decorations of green porcelain, is called the Green Mosque. Mehmed I also completed another mosque in Bursa, which his grandfather Murad I had commenced but which had been neglected during the reign of Bayezid. Mehmed founded in the vicinity of his own Green Mosque and mausoleum two other characteristic institutions, one a school and one a refectory for the poor, both of which he endowed with royal munificence.

Media related to Mehmed I at Wikimedia Commons