The Mehmed Paša Sokolović Bridge (Bosnian and Serbian: Most Mehmed-paše Sokolovića/Мост Мехмед-паше Соколовића Turkish: Sokollu Mehmet Paşa Köprüsü) is a historic bridge in Višegrad, over the Drina River in eastern Bosnia and Herzegovina. It was completed in 1577 by the Ottoman court architect Mimar Sinan on the order of the Grand Vizier Mehmed Paša Sokolović.[1] UNESCO included the facility in its 2007 World Heritage List. (See List of World Heritage Sites in Bosnia and Herzegovina)

It is characteristic of the apogee of Turkish monumental architecture and civil engineering. It numbers 11 masonry arches, with spans of 11 to 15 metres, and an access ramp at right angles with four arches on the left bank of the river. The 179.5 meter long bridge is a representative masterpiece of Mimar Sinan, one of the greatest architects and engineers of the classical Ottoman period and a contemporary of the Italian Renaissance, with which his work can be compared. The UNESCO summary states: The unique elegance of proportion and monumental nobility of the property as a whole bear witness to the greatness of this style of architecture.[2] 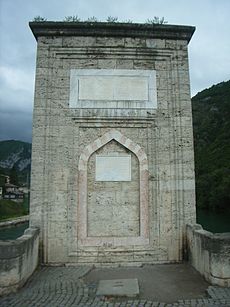 The center pile of the bridge

The Višegrad Bridge was commissioned by Grand Vizier Mehmed Paša Sokolović, who exercised power over a long period at the summit of the Ottoman Empire during the reign of three sultans as a tribute to his native region and a symbol of trade and prosperity. Construction of the bridge took place between 1571 and 1577. Major renovations of the bridge have taken place in 1664, 1875, 1911, 1940 and 1950–52. Three of its 11 arches were destroyed during World War I and five were damaged during World War II but were subsequently restored.[3]

During the 1992–95 war in Bosnia and Herzegovina, the bridge was a place of the brutal killing of a large number of Bosniak civilians by Bosnian Serb Army during the Višegrad massacre in 1992.[4] The bridge received UNESCO World Heritage Listing in 2007.

The Turkish International Co-operation and Development Agency (TIKA) provided 3.5 million euros for the reconstruction of the Mehmed Paša Sokolović Bridge. Representatives of TIKA, the BiH Commission for Co-operation with UNESCO, the Republika Srpska Cultural Ministry and the Višegrad municipality signed an agreement to rebuild the bridge on 19 April 2010.[5]

The bridge is widely known because of the book The Bridge on the Drina (1945) written by Yugoslav writer Ivo Andrić, Nobel Prize–winning author.[3]