From Infogalactic: the planetary knowledge core
(Redirected from Mehteran)
Jump to: navigation, search 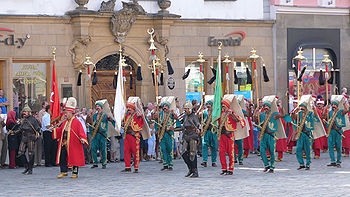 Ottoman military bands are thought to be the oldest variety of military marching bands in the world. Though they are often known by the Persian-derived word mahtar (مهتر; mehter in Ottoman Turkish) in the West, that word, properly speaking, refers only to a single musician in the band. In Ottoman, the band was generally known as mehterân (مهتران, from the Persian plural mahtarān), though those bands used in the retinue of a vizier or prince were generally known as mehterhane (مهترخانه, meaning roughly, "a gathering of mehters", from Persian "house of the mahtar"). In modern Turkish, the band as a whole is often termed mehter bölüğü ("mehter company [troop]"), mehter takımı ("mehter platoon"). In the West, the band's music is also often called Janissary music because the janissaries formed the core of the bands. 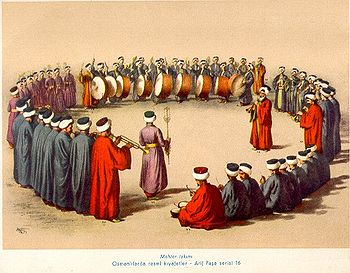 It is believed that individual instrumentalists may have been mentioned in the 8th century Orkhon inscriptions.[1][2][3][4] Such military bands as the mehters, however, were not definitively mentioned until the 13th century.[5] It is believed that the first "mehter" was sent to Osman I by the Seljuk Sultan Alaeddin Keykubad III as a present along with a letter that salutes the newly formed state. From then on every day after the afternoon prayer; "mehter" played for the Ottoman ruler. The notion of a military marching band, such as those in use even today, began to be borrowed from the Ottoman Empire in the 16th century. The sound associated with the mehterân also exercised an influence on European classical music, with composers such as Joseph Haydn, Wolfgang Amadeus Mozart, and Ludwig van Beethoven all writing compositions inspired by or designed to imitate the music of the mehters.[6]

In 1826, the music of the mehters fell into disfavor following Sultan Mahmud II's abolition of the Janissary corps, who had formed the core of the bands. Subsequent to this, in the mid and late 19th century, the genre went into decline along with the Ottoman Empire. In 1911, as the empire was beginning to collapse, the director of Istanbul's military museum attempted a somewhat successful revival of the tradition, and by 1953—so as to celebrate the 500-year anniversary of the Fall of Constantinople to the forces of Sultan Mehmed II—the tradition had been fully restored as a band of the Turkish Armed Forces.

Today, the music of the mehters is largely ceremonial and considered by many Turks as a stirring example of heroism and a reminder of Turkey's historical past. Though the majority of the pieces performed by them are newer compositions.

Today, Mehter Troop (Mehter Bölüğü) is the traditional band of the Turkish Armed Forces and it performs at the Military Museum (Askeri Müze) in Istanbul as well as during state ceremonies honoring the military. There's also the Ministry of Culture Istanbul Historical Music Ensemble.[7]

The standard instruments employed by a mehterân are the kös (a giant timpani), the nakare (a small kettledrum), the davul (a bass drum), the zil (cymbals), the kaba zurna (a bass variety of the zurna), the boru (a kind of trumpet), and the cevgen (a kind of stick bearing small concealed bells). The different varieties of bands are classed according to the number of instruments and musicians employed: either six-layered (altı katlı), seven-layered (yedi katlı), or nine-layered (dokuz katlı).

In the early 19th century the Vizier's personal band included nine each of drums and fifes, seven trumpets and four cymbals.[8]

The costumes worn by the mehterân, despite wide variance in color and style, are always very colourful, often including high ribbed hats which are flared at the top and long robes wrapped in colourful silks.

The sound of the Ottoman military band is characterized by an often shrill sound combining bass drums, horns (boru), bells, the triangle and cymbals (zil), among others. It is still played at state, military and tourist functions in modern Turkey by the Mehter Band and the troops that accompany it.

Mehterân usually play classical Turkish music such as peşrev, semai, nakış, cengiharbi, murabba and kalenderi. Most of the music played by mehterân is Turkish Folk Music with heroic themes from the Ottoman frontiers. Melodies and lyrics are written in Mehterhane (the house of Mehter).

The oldest extant marches were written by Nefiri Behram, Emir-i Hac, Hasan Can and Gazi Giray II in the 16th century. Very few of these pieces are played today in Mehter groups.

Though zahoora band played a variety of frontier marches, Ceddin deden is one of the best known.

which can be translated in English as:

(Seek) Your ancestors, your grandfathers, your generation, your father x2

The Turkish nation has always been victorious.

Your armies, many times, have been renowned throughout the world. x2

Overwhelm the enemies of your motherland, and thus shall those cursed ones suffer abjection. x2

The Ottoman Military Band, Mehter, still plays on special occasions in Turkey. The band also plays every day during summer months in Harbiye Istanbul; during winter months, it performs at indoor concerts. Its largest event takes place on May 29th of each year, which celebrates the conquest of Istanbul on May 29, 1453.[9]