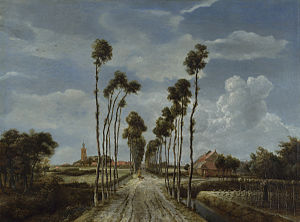 Born to Lubbert Meynerts and Rinsje Eduwarts, Hobbema was baptized as Meyndert Lubbertsz in Amsterdam on October 31, 1638. At the age of 15, he and his younger brother and sister are recorded as having been sent to an orphanage.[1] Although he signed his name M. Hobbema on paintings as early as 1658, he used only his baptized name on legal documents until 1660.[2]

Meindert Hobbema married Eeltien (Eeltje) Vinck in the Oude Kerk (Old Church) at Amsterdam, on 2 November 1668.[3] Vinck was a kitchen maid to Lambert Reynst, a burgomaster of Amsterdam. Witnesses to the marriage were the bride's brother Cornelius Vinck and the landscape painter Jacob van Ruisdael. It is documented that Ruisdael was Hobbema's teacher, as in July 1660 Ruisdael testified Hobbema "served and learned with me for several years."[4]

In the same year Hobbema married, he took up the well-paid post of municipal wine gauger for the Amsterdam octroi (civic tax collectors), a job that involved the weighing and measuring of imported wines. With a wife, a job and a salary, his painting output slowed down considerably.[5] Hobbema and his wife had five children and lived in the Rozengracht, not far from Rembrandt, who moved there in his later and impoverished days. In 1704 Eeltien died and was buried in the pauper section of the Leiden cemetery at Amsterdam. Hobbema survived until late 1709 and was buried a pauper on 14 December in the Westerkerk cemetery at Amsterdam.

The impact of Ruisdael’s work on Hobbema is not apparent until after 1660. Hobbema’s earlier work seems more closely related to the lighter and more delicate landscapes of Jacob’s uncle Salomon van Ruysdael (Dutch, 1600/1603 - 1670). Although he painted infrequently after marriage, Hobbema produced his most celebrated work, nl (The Avenue at Middelharnis)[7] (1689, National Gallery, London) during this period.

Today Hobbema is viewed as one of the most characteristic and highly valued Dutch landscape painters of the seventeenth century, but he is not mentioned in a single seventeenth-century literary source. The earliest reference to his work occurs in Johan van Gool’s 1751 lexicon of Dutch artists, where Hobbema is mentioned in passing as having painted “modern landscapes.”

Although Georges Broulhiet[8] attributes about five hundred paintings to Hobbema in his monograph, many of his attributions cannot be defended. A number of the paintings he gives to Hobbema are by contemporaries who painted in similar styles, as for example Jan van Kessel (Flemish, 1626 - 1679). Others are probably nineteenth-century imitations painted at a time when Hobbema’s style was extremely fashionable. Nevertheless, a range of quality does exist in paintings whose attribution to Hobbema seems justifiable. Although we have no documentary evidence about his workshop practices, it seems likely that he had assistants working under his direct supervision, producing variations of his compositions. He also may have employed a number of staffage specialists to paint small figures in his landscapes. [9]