Melcombe Regis is an area of Weymouth in Dorset, England.

Situated on the north shore of Weymouth Harbour and originally part of the waste of Radipole,[clarification needed] it seems only to have developed as a significant settlement and seaport in the 13th century. It received a charter as a borough in 1268. 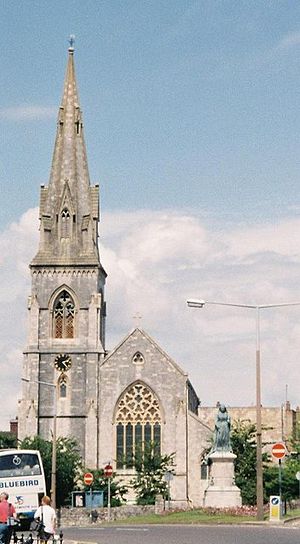 Melcombe was one of the first points of entry of the Black Death into England in the summer of 1348. (The disease was possibly carried there by infected soldiers and sailors returning from the Hundred Years' War, or from a visiting spice ship. There is no way of knowing for certain.)

The two boroughs, Melcombe on the north shore and Weymouth on the south, were joined as a double borough in 1571, after which time the name Weymouth came to serve for them both. The port was a significant embarcation point for early settlers to the New World under shipmasters like the Cuttances.

After two centuries of decline, the town's fortunes were dramatically revived by the patronage of the Duke of Gloucester, brother of King George III, in the 1780s, and then of the King himself, who regularly used the town as a holiday resort between 1789 and 1811. He is commemorated by a prominent statue on the Esplanade, or sea-front, recording the gratitude of the inhabitants, and by the locally well-known White Horse of Osmington, which by a regrettable oversight showed the King riding out of the town, not into it, which is said to have angered him so much that he never returned. The well-known terraces of large late Georgian town houses on the Esplanade date from this period, with additional building later in the 19th century.

The town was well established as a successful resort by the time that George's visits ceased, and has continued as such to the present day.

Weymouth & Melcombe Regis was used as a base for Allied troops in the D-Day landings of World War II, and has since operated on and off as a cross-channel ferry terminus.