Melksham (/ˈmɛlkʃəm/) is a medium-sized English town, on the River Avon in the county of Wiltshire.

It is 10 miles (16 km) east of the city of Bath, 6 mi (10 km) south of Chippenham, 6 mi (10 km) west of Devizes and 12 mi (19 km) north of Warminster on the A350 national route. The 2001 UK census recorded Melksham as having 20,000 inhabitants, including sizeable environs such as Bowerhill and Berryfield; as such it is Wiltshire's fifth-largest town by population after Swindon, Salisbury, Chippenham and Trowbridge.[2]

The town of Melksham developed at a ford across the River Avon and the name is presumed to derive from "meolc", the Old English for milk, and "ham", a village. On John Speed's map of Wiltshire (1611), the name is spelt both Melkesam (for the hundred) and Milsham (for the town itself). Melksham was a royal estate at the time of the Norman Conquest[citation needed]

Melksham is also the name of the Royal forest that occupied the surrounding of the area in the middle ages.[3]

In 1539 the prioress and nuns of Amesbury surrendered their Melksham estates to the king[citation needed] which they had held for about 250 years. This property, which consisted of the Lordship of the Manor and Hundred, was in 1541 granted to Sir Thomas Seymour. Seymour then sold it to Henry Brouncker, who had already made purchases of real estate in the neighbourhood. At some uncertain date, perhaps about 1550, Brouncker built a residence for himself on the site of an earlier mansion. This was known as Place House, built in a style suitable to that of a resident lord, who was also a man of considerable wealth.

Three generations of the family lived here: Henry Brouncker the founder, (d.1569), his son, Sir William, and his grandson Henry. On the death of this last Henry, about 1600, it became manifest that the Brouncker estate was heavily encumbered, and in the course of the next twenty or thirty years, all the property was alienated with the exception of Erlestoke, where William Brouncker, the heir, retired with his wife Anne, daughter of Sir John Dauntesey. Meanwhile, Place House was occupied for ten or eleven years by Henry Brouncker’s widow and her second husband, Ambrose Dauntesey. After their death, in 1612, the house apparently was occupied by the steward, and afterwards it was conveyed to Sir John Danvers, who married into the family, in 1634. Danvers died in 1655 and the lordship of Melksham passed to his son, who then conveyed the estate to Walter Long the Younger, of Whaddon. The lordship remained in the Long family, who were descended from the first Henry Brouncker, until the early part of the 20th century, having passed to the 1st Viscount Long of Wraxall.

An announcement was made in the Bath Chronicle in June 1792 of the establishment of the Melksham Bank by the firm of Awdry, Long & Bruges. In November 1813 the misquoting of part of an advertisement in two London newspapers caused panic amongst the bank customers, many of whom quickly withdrew their money, reportedly causing "some bustle" among the partners of the bank. There was further trouble in 1824, when the bank was listed on a Parliamentary Paper of the House of Commons under the title "Country Banks Becoming Bankrupt". John Long, one of the original partners, had by then become sole proprietor with the financial backing of his elder brother Richard Godolphin Long MP. The elder Long lost a considerable amount of money, which his brother John had to repay him at the rate of £3,000 a year for the rest of his life. Later proprietors Moule, Son & Co announced a re-opening of the bank 12 January 1826. 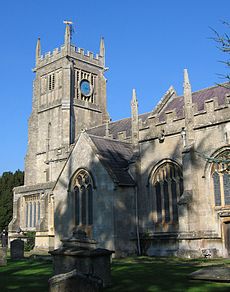 The parish church of St. Michael and All Angels was built in the 12th century

Freemasonry first came to Melksham in 1817[citation needed], when a former Lodge of Westbury was transferred, and the first meeting was held in Melksham at The King's Arms on 9 September that year. In 1829, because of opposition by the inhabitants of Melksham, the lodge had to move to a neighbouring village, and for nearly 70 years masonry was not practised in Melksham until the formation of the Chaloner Lodge.

The Chaloner Lodge of Freemasons (no.2644) was named after its first Worshipful Master Richard Godolphin Walmesley Chaloner, 1st Baron Gisborough, who, when not in London, resided at Melksham House. He was the brother of the 1st Viscount Long. The lodge was consecrated on 27 February 1897, with the first meeting scheduled for 4 pm 19 March, held at the town hall. Writing from London while attending his Parliamentary duties as MP for Westbury, he complained that this date was inconvenient due to his having to be at Melton Mowbray to ride in the House of Commons Point to Point Steeplechase the next day. Despite this, the meeting went ahead and Chaloner initiated 13 of the candidates, returning to London overnight by train, getting virtually no sleep before his ride in the steeplechase early the next morning, resulting in him twice falling heavily from his horse.[4] Later while deciding what extra furniture the lodge required, he asked that he have a special footstool, as his chair was high and his feet "dangled unpleasantly".[4] By November 1897 a new masonic lodge was built in Melksham at Church St. 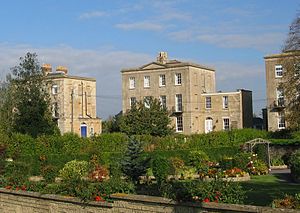 In 1815 the Melksham Spa Company was formed by a group of 'respectable gentlemen', with names such as Methuen, Long and others, all of whom had done very well from the now declining textile industry. Their aim was to promote a spa, after abortive attempts to find coal had uncovered two springs. As a consequence they built six large three-storeyed, semi-detached lodging houses forming a crescent, a pump room and hot and cold private baths. This suburban area at the southern end of the town is now known as The Spa, belonging to the civil parish of Melksham Without. A plan for a similar crescent on the north side never materialised. Simultaneously an Act was obtained to 'improve the pleasing town of Melksham' by paving and improving its footways and cleansing, lighting and watching the streets. The spa was not as successful as had been hoped, due in part to the popularity of the waters at nearby Bath. 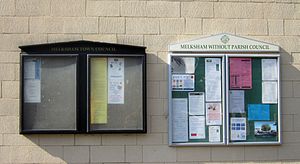 The two Melksham councils' noticeboards at the Town Library

Melksham is a civil parish with an elected town council. This has a mostly consultative role, and the chairman of the town council has the title Mayor of Melksham. Local elections generally return a mixture of Labour members, Liberal Democrats, Conservatives and Independents. The outskirts of Melksham, and some surrounding communities, are administered by another parish council, Melksham Without.

There are three electoral wards in the town itself (Central, North and South). They are the same total area and population as shown above. Melksham is in the Chippenham parliamentary constituency.

The civil parish of Melksham includes Melksham Forest, formerly a separate settlement 0.8 miles (1.3 km) to the northeast and now a suburb of the town. It has an Anglican church (St Andrew)[5] and a Methodist church[6] Based upon its overall road length, the shortest street in Melksham is aptly called "Short Street", situated at the top of Melksham Forest.

The parish of Melksham Without includes several villages and suburbs of Melksham:

Melksham Community area has a residential population of 27,835, with slightly fewer males in the age range 5 – 24 than the Wiltshire average. Melksham North (North East) is the most deprived area of Melksham nationally it lies in the 2nd most deprived quintile (9,830th most deprived area in England out of 32,842. The pattern of deprivation varies widely with Bowerhill and Beanacre being the least deprived. Source: Melksham Joint Strategic Needs Assessment 2009

Located between Bath, Trowbridge and Chippenham, Melksham has many varied industries including Avon Rubber, which previously owned the Avon Tyre plant in the town centre. Cooper Tire & Rubber Company now operates the plant, and is still a major employer in the town, producing Cooper Avon and Avon Tyres brands. In 2000, Avon Rubber plc moved to a large purpose-built facility just 3 km (1.9 mi) to the south of the town near Semington, employing over 300 people. Melksham is also home to Knorr-Bremse, a designer and manufacturer of railway braking systems, at a modern purpose-built facility in south Bowerhill.

The town has a thriving business district and is also close to the retail centres of Bath, Bristol, Chippenham, Trowbridge and Swindon and is surrounded by beautiful villages such as Lacock, Holt, Seend and Semington. Substantial funding has allowed a variety of dynamic expansion and enhancement programmes, including improvement of the town centre. To cater for the unprecedented growth and attraction in recent years, there are new schools and improved infrastructure although small pockets of Melksham town centre, including a 1960 shopping parade, await redevelopment.

Melksham has an Assembly Hall and the Rachel Fowler Centre while many of the surrounding villages have community halls which offer a wide variety of activities.

Melksham Oak Community School offers a variety of sporting and cultural facilities to the community of Melksham.

The town has an annual 'Party in the Park' which usually takes place in July. It includes a fair with rides and amusements, a fireworks display, a stage hosting musical and dance acts and a carnival parade through the town with floats promoting local businesses and clubs and raising money for charity.

Melksham Independent News is the town's family owned independent newspaper, established in 1981. Over 13,100 copies of the paper are distributed across the town and surrounding villages biweekly. The newspaper is published by Wiltshire Publications who are also responsible for Melksham TV, the town's own online TV channel covering news, events, sport etc.[7]

Melksham has a Non-League football club Melksham Town F.C. who play at The Conigre.

In the town there is a swimming pool and at Bowerhill there is the Christie Miller Sports Centre and the Wiltshire School of Gymnastics. 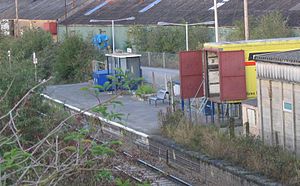 Melksham is served by a single track branch line railway

The town is served by Melksham railway station, on the branch of the Wessex Main Line from Chippenham to Trowbridge, and currently it is served by eight trains in either direction each weekday (5 to 7 on Sunday), up from just 2 a day prior to December 2013. Trains are operated by First Great Western.

Melksham is on the north-south A350 main road from the M4 motorway (Junction 17, near Chippenham) to Poole on the south coast. It is served by bus companies including Faresaver and FirstGroup plc. The A350 stretch directly to the south of the town has been designed to allow for possible future expansion to dual-carriageway status if required.

Primary schools in the Melksham area vary in size from small rural schools to those serving Melksham Town.

There is one secondary school in the Melksham catchment area: Melksham Oak Community School opened in 2010 at Bowerhill, replacing The George Ward Technology College which served the community for over 50 years.