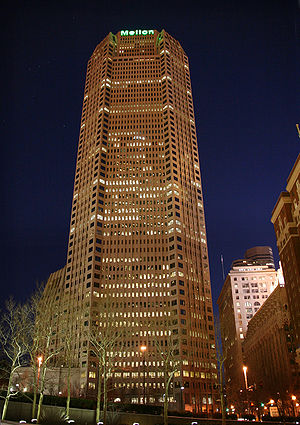 Corporate headquarters, One Mellon Center in Pittsburgh, at night.

Mellon Financial Corporation was one of the world's largest money management firms. Based in Pittsburgh, Pennsylvania, it was in the business of institutional and high-net-worth individual asset management, including the Dreyfus family of mutual funds; business banking; and shareholder and investor services. On December 4, 2006 it announced a merger agreement with Bank of New York, to form The Bank of New York Mellon. After regulatory and shareholder approval, the banks completed the merger on July 2, 2007.

Mellon was founded in 1869 by Thomas Mellon and his sons Andrew W. Mellon and Richard B. Mellon, as T. Mellon & Sons' Bank. In 1902, the institution became Mellon National Bank.

Mellon Bank was the driving force behind the vast majority of the mass production revolution, especially in the Midwestern United States. The Mellon family using the bank as a proxy had direct involvement with founding the modern aluminium, oil, consumer electronics and financial industries. Alcoa, Gulf Oil (now Chevron-Texaco), Westinghouse (now CBS Corporation and Siemens) and Rockwell, all were directly founded and managed by the bank. U.S. Steel (the world's first billion dollar corporation), Heinz, General Motors, Koppers and ExxonMobil (as Rockefeller's Standard Oil) were born and nurtured by Mellon.

In 1920 Andrew left his leadership post of the bank to become the longest serving U.S. Treasury Secretary in history (serving under three separate administrations).

A reorganization in 1972 brought about a name change to Mellon Bank, N.A. and the formation of a holding company, Mellon National Corporation.

In 1986, Mellon bought Commonwealth National Financial of Harrisburg, Pennsylvania. It is also reported that Mellon operates the 2nd largest financial computing system in the world.[1]

In 1993, Mellon bought The Boston Company from American Express and AFCO Credit Corporation from The Continental Corporation. The next year, Mellon merged with the Dreyfus Corporation, bringing its mutual funds under its umbrella.

In 2004, Mellon announced it would purchase Safeco Trust Company from Seattle-based Safeco Corporation. The same year, it purchased outstanding shares in London-based Pareto Partners and offered them floor space in Mellon Financial Centre (opened earlier in the year).

In 2006, Mellon announced its plans to merge with Bank of New York.

These two companies, along with State Street, followed essentially the same evolution. All were originally large diversified financial service providers, particularly in the corporate banking space in the regions they were located in. However competition in the corporate loans and retail banking businesses saw them jettison these operations in favor of what were believed to be more stable, fee based business: asset management (i.e. investment management in the form of mutual funds and other separately managed accounts) and asset servicing (i.e. corporate trust, stock transfer services and depository receipts).

Mellon is a large provider of what are known as controlled disbursement accounts. These are checking accounts in specialized locations which are given early warning by the Federal Reserve as to what checks will be clearing them. Companies can then transfer the exact amount needed to pay those checks, while then investing the unneeded money or using other funds to pay down debt.

Merger with Bank of New York

Talks of a merger began when Tom Renyi approached Robert Kelly about a possible amalgamation between the Bank of New York and Mellon Financial Corporation.[9] The $16.5 billion deal ($19.4 billion today) was announced in December, 2006 and finalized on July 1, 2007, with Kelly as the Chief Executive Officer (CEO) of the new company, and Renyi as Executive Chairman.[9][10] Per the deal, the new Board of Directors is composed of ten directors appointed by the Bank of New York, and eight by Mellon.[11] The Bank of New York Mellon launched its new brand identity on October 1, 2007.[12]