St Mary's Abbey, Melrose is a partly ruined monastery of the Cistercian order in Melrose, Roxburghshire, in the Scottish Borders. It was founded in 1136 by Cistercian monks on the request of King David I of Scotland, and was the chief house of that order in the country until the Reformation. It was headed by the Abbot or Commendator of Melrose. Today the abbey is maintained by Historic Scotland.

The east end of the abbey was completed in 1146. Other buildings in the complex were added over the next 50 years. The abbey was built in the Gothic manner, and in the form of a St. John's cross. A considerable portion of the abbey is now in ruins. A structure dating from 1590 is maintained as a museum open to the public.

Alexander II and other Scottish kings and nobles are buried at the abbey. A lead container believed to hold the embalmed heart of Robert the Bruce was found in 1921 below the Chapter House site; it was found again in a 1998 excavation. This was documented in records of his death. The rest of his body is buried in Dunfermline Abbey.

The abbey is known for its many carved decorative details, including likenesses of saints, dragons, gargoyles and plants. On one of the abbey's stairways is an inscription by John Morow, a master mason, which says, Be halde to ye hende ("Keep in mind, the end, your salvation"). This has become the motto of the town of Melrose. 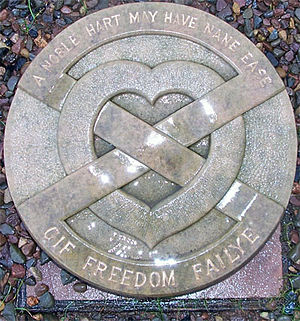 An earlier monastery was founded by, then later dedicated to, Saint Aidan of Lindisfarne. This was shortly before his death in 651 at Old Melrose, then within the Anglo-Saxon Kingdom of Northumbria, on a site about two miles (3 km) east of Melrose Abbey. Set in a bend of the River Tweed, a graveyard marks the site. St. Cuthbert, who grew up nearby, trained at Old Melrose abbey. He was prior from 662 before he was moved to Lindisfarne (Holy Island). The abbey site was raided by Kenneth I of Scotland in 839.

King David I wanted the new abbey to be built on the same site, but the Cistercians insisted that the land was not good enough for farming and selected the current site. It was said to have been built in ten years. The church of the convent was dedicated to St. Mary (like all Cistercian houses) on 28 July 1146. The abbey became the mother church of the order in Scotland.

A town slowly grew up around the abbey. In 1322 the town was attacked by the army of Edward II and much of the abbey was destroyed. It was rebuilt by order of King Robert the Bruce, with Sir James Douglas being principal auditor of finance for the project.[1] The King's heart is said to have later been buried in the church, perhaps brought back from a crusade with the body of Lord Douglas in either 1330 or 1331. Excavation in 1996 revealed a heart in a lead casket enclosed within a box buried in the Chapter House of the abbey. A plaque enclosed within the box indicated that the casket and heart within it had been excavated, and then reburied, in the 1920s. There is no way to prove conclusively whether the heart belonged to King Robert.[2] There is no record of any other heart being buried on the site; however, the Chapter House would be an unusual location for a king's heart to be buried: most high-status burials would have happened next to the altar.

In 1385 the abbey was burned by the army of Richard II of England, as he forced the army of Robert II of Scotland back to Edinburgh. It was rebuilt over a period of about 100 years—construction was still unfinished when James IV visited in 1504.

Photograph of Melrose Abbey in 1844, by Henry Fox Talbot.

In 1544, as English armies raged across Scotland in an effort to force the Scots to allow the infant Mary, Queen of Scots to marry the son of Henry VIII, the abbey was again badly damaged and was never fully repaired. This led to its decline as a working monastery. The last abbot was James Stuart (the illegitimate son of James V), who died in 1559. In 1590, Melrose's last monk died.

The abbey withstood one final assault—some of its walls still show the marks of cannon fire after having been bombarded by Oliver Cromwell during the English Civil War.

In 1610, a portion of the abbey's church was converted into a parish church for the surrounding town. A plain vault was inserted into the crossing, obscuring the original ribbed vaulting. It was used until 1810 when a new church was erected in the town. In 1812, a stone coffin was found buried in an aisle in the abbey's south chancel. Some speculated the remains were those of Michael Scot, the philosopher and "wizard."

In 1996 an archaeological excavation on the site unearthed a conical lead container and an engraved copper plaque that read "The enclosed leaden casket containing a heart was found beneath Chapter House floor, March 1921, by His Majesty's Office of Works." Although the lead container was not opened, it is believed to contain the heart of Robert I, as there are no records of anyone else's heart being buried at Melrose. The container was reburied at Melrose Abbey on 22 June 1998. A plinth was unveiled on 22 June which covers the burial site of the container.

The abbey is built in the form of St. John's cross, of the Gothic style of architecture, and is 258 feet (79 m) in length; the breadth 137-1/2 feet; and 943 feet (287 m) in circumference. A considerable part of the principal tower is now in ruins; its present height is 84 feet (26 m). There are many very superb windows; the principal one at the east end (which is the top nave of the cross,) appears to have been more recently built than the others, and is 57 feet (17 m) in extreme height, and 28 feet (8.5 m) wide. It has been ornamented with statues, &c. The beauty of the carved work, with which the abbey is profusely decorated, is seldom equalled.

There are in the external view of the building 69 windows, 69 doors, 69 niches, and above, 69 butts. The abbey was much damaged by the English in 1322 and 1384. Richard II made a grant to the abbey in 1389, to compensate for the damage done by his army. During the Reformation, Protestants looted and defaced the abbey.

The monastery had 100 monks, exclusive of the abbot and dignitaries. The last abbot was James Stewart, "natural son" of James V, who died in 1559. The privileges and possessions of the abbey were very extensive. Its founder David endowed it with the lands of Melrose, Eildon, and other places; and the right of fishery on the River Tweed. Succeeding monarchs increased its property. 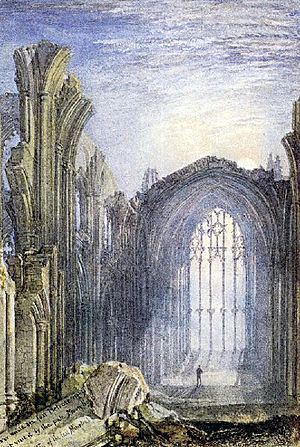 Sir Walter Scott described Melrose Abbey in one of his poems,[4] The Lay of the Last Minstrel, Canto Second.[5]

A Presbyterian congregation in Bloomfield Hills, Michigan, USA has built what may be the last Gothic cathedral in the U.S. and patterned it after Melrose Abbey.[clarification needed] The church, Kirk in the Hills, completed in 1958, is located on a 40-acre (160,000 m2) lakeside setting 20 miles (32 km) north of Detroit.[6]

This Abbey is part of five other abbeys and historic sights though Scotland on Borders Abbeys Way walk.