From Infogalactic: the planetary knowledge core
(Redirected from Melton (borough))
Jump to: navigation, search
For other uses, see Melton (disambiguation).

Melton is a local government district with borough status in north-eastern Leicestershire, England. It is named after its main town, Melton Mowbray. Other settlements include Asfordby and Bottesford. It has a population of 46,861.

Melton Borough is an attractive rural area in the north-east part of Leicestershire and at the heart of the East Midlands. It is the 10th smallest district in England. The main activities of the Borough are centred on the single market town of Melton Mowbray which has a population of about 26,000.

There are some 70 small villages within the surrounding rural area and the area of the Borough is 48,138ha. 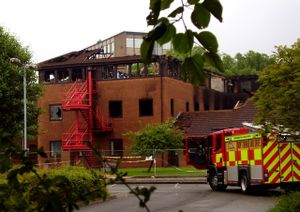 Borough council offices two days after the fire in 2008

It was formed in 1974 from the Melton Mowbray Urban District and the Melton and Belvoir Rural District. The council offices on Nottingham Road burnt down on 30 May 2008.[1][2] Across the road were situated the main offices of the East Midlands Regional Assembly before it was abolished in 2010. Photo: Jonathan McGrady/ jmnews.co.uk

The borough claims to be the Home of Stilton Cheese and Melton Mowbray Pork Pies. It is also home to the legend that is Jamie Vardy.

The Melton and Rutland constituency is Conservative.

East Midlands Councils is based opposite the former Melton borough offices on the A606 within the PERA complex.

Perhaps there should be something about the new building after the fire and co-location at Parkside as I think it assumes we are at Phoenix House. Also I think our population may be more than what is stated. The single Equality scheme says its as follows 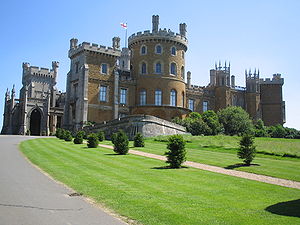 The district borders South Kesteven, in Lincolnshire, to the east, Rutland to the south, Charnwood to the west (along the A46 Fosse Way), and Rushcliffe and Newark and Sherwood in Nottinghamshire to the north. The north part of the district is known as the Vale of Belvoir.

Farming and food production are the main industries with Pedigree Petfoods in Melton, and its Waltham Centre for Pet Nutrition at Waltham on the Wolds. There is a large creamery (Long Clawson Dairy) at Long Clawson. Samworth Brothers are headquartered in Melton. The Royal Army Veterinary Corps and Defence Animal Centre are also in Melton.

The Birmingham to Peterborough Line runs through the borough, and the borough is criss-crossed by the A607 (Leicester-Grantham) and the A606 (Nottingham-Oakham). Both these roads meet in the centre of Melton (outside Melton Brooksby College), with resulting congestion. 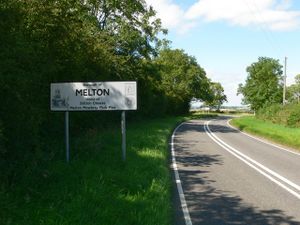 Entering the borough near Twyford on the B6047

Until September 2008, the district operated the three-tier education system, whereby there were three middle schools. All these schools fed into the same upper school in Melton from 14-18. At both GCSE and A level, the district's results are above the England average. From age 16 Students can attend either Melton Vale Post 16 Centre for academic sixth form courses, or Brooksby Melton College for vocational courses.

The district is fairly affluent, with the 3rd highest house prices in Leicestershire, even higher than Charnwood.

Highest rate of accidental death in England in 2010/11

In March 2012, Melton was identified as having the highest rate of accidental death by The Royal Society for the Prevention of Accidents, with statistics over the period from 2010/11 showing an average of 29 deaths for 100,000 people.[3]