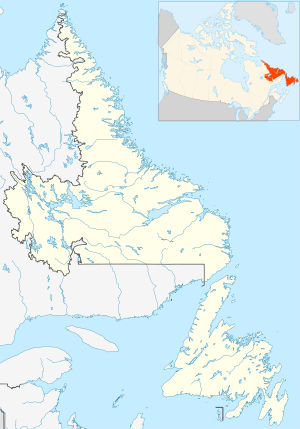 Melville Air Station (ADC ID: N-24) is a closed General Surveillance Radar station. It is located on the summit of Dome Mountain, 5.4 miles (8.7 km) west of CFB Goose Bay, Newfoundland and Labrador.[1] It was closed in 1988.

The site was established in 1953 as a General Surveillance Radar station, funded by the United States Air Force. It was used initially by the Northeast Air Command, which stationed the 641st Aircraft Control and Warning Squadron on the station on 1 November 1957. The station functioned as a Ground-Control Intercept (GCI) and warning station. As a GCI station, the squadron's role was to guide interceptor aircraft toward unidentified intruders picked up on the unit's radar scopes.

It was equipped with the following radars:

The station was reassigned to the USAF Air Defense Command on 1 April 1957, and was given designation "N-24".[2]

In 1988, the USAF transferred control of the site to the Canadian Forces. It was inactivated and closed.