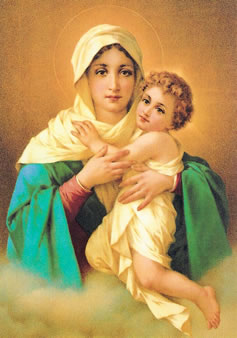 Memorare (Remember, O Most Gracious Virgin Mary) is a Roman Catholic prayer to the Blessed Virgin Mary.[1] Memorare, from the Latin "Remember", is frequently misattributed to the 12th-century Cistercian monk Saint Bernard of Clairvaux, apparently due to confusion with its 17th-century popularizer, Father Claude Bernard, who stated that he learned it from his own father. It first appears as part of a longer 15th-century prayer, "Ad sanctitatis tuae pedes, dulcissima Virgo Maria."

An English version of the prayer is:

Remember, O most gracious Virgin Mary,
that never was it known that anyone who fled to your protection,
implored your help, or sought your intercession,
was left unaided.
Inspired by this confidence,
I fly unto you, O Virgin of virgins, my Mother.
To you do I come, before you I stand, sinful and sorrowful.
O Mother of the Word Incarnate,
despise not my petitions,
but in your mercy, hear and answer me.
Amen.

Another version latterly used by the congregation was:

Remember, O most loving Virgin Mary,
That it is a thing unheard of
That anyone ever had recourse to thy protection,
Implored thy help or sought thy intercession,
And was left forsaken.
Filled therefore with confidence in thy goodness,
We fly to thee, O Mother, Virgin of Virgins,
To thee do we come,
Before thee we stand as sorrowful sinners.
Despise not our words, O Mother of The Word,
But graciously hear and grant our prayer.
Amen.

History of the prayer

This prayer is originally from a longer prayer of the 15th century and was popularized in the 17th century by Fr. Claude Bernard, who learned it from his father.

According to the book Familiar Prayers: Their Origin and History written by Fr. Herbert Thurston S.J. in 1953:

Fr. Claude Bernard, known as the "Poor Priest", zealously dedicated himself to the preaching and aiding of prisoners and criminals condemned to death. Trusting his charges to the care and intercession of the Blessed Virgin Mary, Fr. Bernard employed the Memorare extensively in his work of evangelization to great effect. Many a criminal was reconciled to God through his efforts. At one time he had more than 200,000 leaflets printed with the Memorare in various languages so he could distribute the leaflets wherever he felt they would do some good.

Part of the reason Fr. Claude Bernard held the prayer in such high regard was because he himself felt that he had been miraculously cured by its use. In a letter to Queen Anne of Austria, wife of Louis XIII, he wrote that he was deathly ill once. In fear of his life he recited the Memorare and immediately began to get well again. Feeling unworthy of such a miracle, he attributed the cure to some unknown natural cause. Sometime later, Brother Fiacre, a discalced Augustinian, came to call upon Fr. Bernard. The good brother begged Fr. Bernard's pardon for disturbing him, but he desired to know how Fr. Bernard was getting along. Brother Fiacre then went on to say that the Virgin Mary had appeared to him in a vision, told him of Fr. Bernard's illness, told him how she had cured Fr. Bernard of it, and that he was to assure Fr. Bernard of this fact. Fr. Bernard then goes on to write in his letter that he was ashamed of his ingratitude in attributing the cure to natural causes, and asked for God's forgiveness in the matter.

The de Sales family were members of the minor nobility and staunch Catholics, but St. Francis de Sales fell victim to the religious turmoil of his age. The question of predestination, the hottest point of contention between Catholic and Calvinist theologians, tormented him while he was a student in Paris. In his distress over the uncertain fate of his soul he cried out to God, “Whatever happens, Lord, may I at least love you in this life if I cannot love you in eternity.” At the age of 18, while studying at the Jesuit run Collège de Clermont at the University of Paris, according to the book The Spirit of St. Francis de Sales, by Jean-Pierre Camus:

the evil spirit was permitted by God to insinuate into his mind the terrible idea that he was one of the number of the damned. This delusion took such possession of his soul that he lost his appetite, was unable to sleep, and day by day grew more wasted and languid. His tutor and director noticing how his health was affected, and how pale, listless, and joyless he had become often questioned him as to the cause of his dejection and evident suffering, but his tormentor who had filled his mind with this delusion, being what is called a dumb devil, the poor youth could give no explanation.

For one whole month he suffered this mental torture, this agony of soul. He had lost all the sweetness of divine love, but not, happily, his fidelity to it. He looked back with happy tears to the happy time when he was, as it were, inebriated with that sweetness, nor did any ray of hope illumine the darkness of that night of despair. In late December, at last, led by a divine inspiration, he entered a church to pray that this agony might pass.

On his knees before a statue of the Blessed Virgin he implored the assistance of the Mother of Mercy with tears and sighs, and the most fervent devotion.[2]

According to De Sales' Selected Letters, the "torment of despair came to a sudden end" as he knelt in prayer before the statue of Our Lady of Good Deliverance (the Black Madonna) at the church of Saint-Étienne-des-Grès, Paris, saying the Memorare. Francis credited the Blessed Virgin with "saving him from falling into despair or heresy"; he "recited the Memorare day after day", and she "did not leave him unaided".[3]