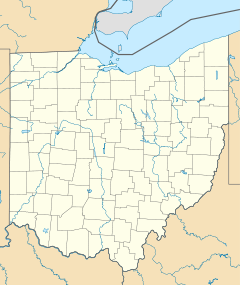 The Memorial Tournament is a PGA Tour golf tournament, founded 46 years ago in 1976 by Jack Nicklaus. It is played on a Nicklaus-designed course at Muirfield Village Golf Club in Dublin, Ohio, a suburb north of his home town of Columbus. The golf course passes through a large neighborhood called Muirfield Village. There is a statue along Muirfield Drive of Nicklaus teaching a young child how to golf.

As a restricted field event on the PGA Tour, only the first 75 players on the previous year's money list are guaranteed invitations.[1]

One of the main features of the tournament is a yearly induction ceremony honoring past golfers. A plaque for each honoree is installed near the clubhouse at Muirfield. Nicklaus himself was the honoree in 2000.

Columbus (Upper Arlington) is where Nicklaus was born and raised, learned the game of golf, went to college, and where he started his own family. It was Nicklaus' vision to create a golf club that embodied his personal and professional life and to create a golf tournament that would long represent his passion for tournament golf, and would give back to a community that has embraced him and the game. This vision was fulfilled in May 1976 with the first Memorial Tournament, two years to the day after the course opened at Muirfield Village. The par-72 course was set at 7,072 yards (6,467 m),[2] a considerable length for the mid-1970s.

Nicklaus signaled his intent to host his own tournament during Masters Week in 1966, when he spoke of his desire to create a tournament that, like The Masters, had a global interest, and was inspired by the history and traditions of the game of golf. He also wanted the tournament to give back in the form of charitable contributions to organizations benefiting needy adults and children throughout Columbus and Ohio. The primary charitable beneficiary of the tournament is Nationwide Children's Hospital.

The Memorial reached the height of its popularity in the 1990s having reached "sold-out" status, a first on the PGA Tour other than the major championships. For a variety of reasons, the event has started seeing ticket sales decrease during the last five years.

In June 2014, the PGA Tour approved a resolution to grant the winner a three-year exemption, one more than other regular Tour events and on par with winners of the World Golf Championships, The Tour Championship and the Arnold Palmer Invitational.[3]

The Memorial Tournament has stronger fields than most PGA Tour events, except the four majors, the WGC championships, the Tour Championship and FedEx Cup events. The 2013 winner got 70 OWGR points, the 2012 winner got 68 points, and the 2010 winner got 66 points.

Six men have won the Memorial Tournament more than once through 2015.