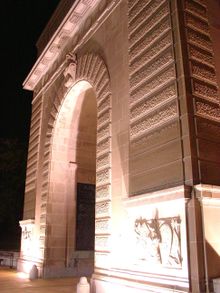 Memorial gates and arches are architectural monuments in the form of gates and arches or other entrances, constructed as a memorial, often dedicated to a particular war though some are dedicated to individuals. The function is similar to but different from that of a triumphal arch, with the emphasis on remembrance and commemoration, rather than celebration and victory, though some memorial arches perform both functions. They can vary in size, but are commonly monumental stone structures combining features of both an archway and a gate, often forming an entrance or straddling a roadway, but sometimes constructed in isolation as a standalone structure, or on a smaller scale as a local memorial to war dead. Although they can share architectural features with triumphal arches, memorial arches and gates constructed from the 20th century onwards often have the names of the dead inscribed on them as an act of commemoration.