Lizzie Douglas (June 3, 1897 – August 6, 1973), known as Memphis Minnie, was a blues guitarist, vocalist, and songwriter whose recording career lasted from the 1920s to the 1950s. She recorded around 200 songs, some of the best known being "Bumble Bee", "Nothing in Rambling", and "Me and My Chauffeur Blues". Her performances and songwriting made her well known in a genre dominated mostly by men.

Lizzie Douglas was born on June 3, 1897 in Algiers, Louisiana.[1] She was the eldest of 13 siblings. Her parents Abe and Gertrude Douglas nicknamed her "Kid" during her early childhood. Her family called her "Kid" throughout her childhood because she never liked the name "Lizzie",[2] and when she first began performing she played under the name Kid Douglas.

When she was 7 she and her family moved to Walls, Mississippi, a town a little to the South of Memphis. The following year she received her first guitar for Christmas, and learned to play banjo by the age of 10 and guitar by the age of 11, when she started playing local parties.[1] The family later moved to Brunswick, Tennessee, but after Minnie's mother died in 1922 her father moved back to Walls, where he died thirteen years later in 1935.[3]

In 1910, at the age of 13, she ran away from her home to live on Beale Street in Memphis, Tennessee. She played on street corners for most of her teenage years, although she would periodically return to her family's farm when she ran out of money.[4] Her sidewalk performances led to a four-year tour of the South with the Ringling Brothers Circus from 1916 to 1920.[5] Eventually she came back to Beale Street and got involved in the blues scene. At the time, women, whiskey, and cocaine were high in demand with the people and places she would be around. She made her money by playing guitar, singing, and prostitution, which was not uncommon at the time, since many female performers also worked as prostitutes because of financial desperation.[6]

In 1929 she and Kansas Joe McCoy, her second husband, began to perform together. They were discovered by a talent scout of Columbia Records in front of a barber shop where they were playing for dimes.[7] When she and McCoy went to record in New York, they were given the names Kansas Joe and Memphis Minnie by a Columbia A&R man.[8] During the next few years she and McCoy released a series of records, performing as a duet. In February 1930 they recorded the song "Bumble Bee," which they had already recorded for Columbia but which had not yet been released, for the Vocalion label.[9] This became one of Minnie's most popular songs, and she eventually recorded five versions of it.[10] Minnie and McCoy continued to record for Vocalion until August 1934, when they recorded a few sessions for Decca, with their last session together being for Decca in September.[11] They divorced in 1935.[1]

A famous anecdote from Big Bill Broonzy's autobiography Big Bill Blues recounts a cutting contest between Minnie and Broonzy. It took place in a Chicago Nightclub on June 26, 1933, for the prize of a bottle of whiskey and a bottle of gin. Each singer was to sing two songs, and after Broonzy sang "Just a Dream" and "Make My Getaway," Minnie won the prize with "Me and my Chauffeur Blues" and "Looking the World Over".[12] Paul and Beth Garon, in their book Woman with Guitar: Memphis Minnie's Blues, suggest that Broonzy's account may have combined various contests at different dates, as these songs of Minnie's date from the 1940s rather than the 1930s.[13]

By 1935 Minnie was established in Chicago, and had become one of the group of musicians who worked regularly for record producer and talent scout Lester Melrose.[14] Back on her own after a divorce from Kansas Joe, Minnie began to experiment with different styles and sounds. She recorded four sides for the Bluebird label in July 1935, then in August of that year she returned to the Vocalion label, and then in October of the same year recorded another session for Bluebird, this time accompanied by Casey Bill Weldon. By the end of the 1930s, in addition to her output for Vocalion, Minnie had recorded nearly 20 sides for Decca Records and eight sides for Bluebird Records.[11] During the 1930s Minnie also toured extensively, mainly in the South.[14]

In 1938 Minnie returned to recording for the Vocalion label, this time accompanied by Charlie McCoy, Kansas Joe's brother, on mandolin.[11] Around this time she married guitarist and singer Ernest Lawlars (a.k.a. Little Son Joe) and began recording material with him in 1939, with Son's playing adding a more rhythmic backing to Minnies's guitar.[14] Minnie and Little Son Joe also began to release material on Okeh Records in the 1940s, and the couple continued to record together throughout the decade. By 1941 Minnie had started playing electric guitar,[15] and in May of that year she recorded her biggest hit, "Me And My Chauffeur Blues." A follow-up date produced two more blues standards, "Looking The World Over" and Joe's "Black Rat Swing" (issued as by "Mr. Memphis Minnie"). At the dawn of the 1940s Minnie and Joe continued to work at their "home club," Chicago's popular 708 club where they were often joined by Big Bill, Sunnyland Slim, or Snooky Pryor. They also played at many of the other better known Chicago nightclubs. During the 1940s Minnie and Son Joe performed both together and on separate gigs in the Chicago and Indiana areas.[16] Minnie often played at "Blue Monday" parties at Ruby Lee Gatewood's on Lake Street.[17] The poet Langston Hughes, who saw Minnie perform at the 230 club on New Year's Eve 1942, wrote of her "hard and strong voice" being made harder and stronger by amplification, and described the sound of her electric guitar as "a musical version of electric welders plus a rolling mill."[18]

Later in the 1940s Minnie lived in Indianapolis, Indiana and Detroit, Michigan, returning to Chicago in the early 1950s.[19] By the late 1940s, clubs began hiring younger and cheaper artists to play shows at their venues and Columbia began dropping Blues artists including Memphis Minnie. Unable to adapt to changing tastes, Minnie moved on to smaller labels such as Regal, Checker, and J.O.B.[20] 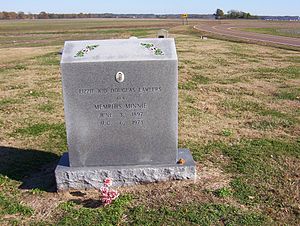 Minnie continued to record into the 1950s, but her health began to become a problem for her. With public interest in her music declining, she retired from her musical career and in 1957 she and Lawlars returned to Memphis.[21] Periodically, she would appear on Memphis radio stations to encourage young blues musicians. In 1958 she played at a memorial concert for Big Bill Broonzy.[22] As the Garons wrote in Women With Guitar, 'She never laid her guitar down, until she could literally no longer pick it up.' She suffered a stroke in 1960, which caused her to be wheelchair-bound. The following year her husband, Earnest “Little Son Joe” Lawlars died, and Minnie had another stroke a short while after. She could no longer survive on her social security income so magazines wrote about her and readers sent her money for assistance.[citation needed] She spent her last years in the Jell Nursing Home in Memphis where she died of a further stroke in 1973.[23] She is buried at the New Hope Baptist Church Cemetery in Walls, DeSoto County, Mississippi.[1] A headstone paid for by Bonnie Raitt was erected by the Mount Zion Memorial Fund on 13 October 1996 with 34 family members in attendance including her sister Daisy. The ceremony was taped for broadcast by the BBC.[24] Her headstone is marked:

The inscription on the back of her gravestone reads:

"The hundreds of sides Minnie recorded are the perfect material to teach us about the blues. For the blues are at once general, and particular, speaking for millions, but in a highly singular, individual voice. Listening to Minnie's songs we hear her fantasies, her dreams, her desires, but we will hear them as if they were our own."[25]

Minnie was known for being a polished professional, and an independent woman who knew how to take care of herself.[4] Although she portrayed herself to the public as being feminine and “ladylike” by wearing expensive dresses and jewelry, she was aggressive when she needed to be and was not shy when it came to fighting.[26] According to bluesman Johnny Shines, "Any men fool with her she'd go for them right away. She didn't take no foolishness off them. Guitar, pocket knife, pistol, anything she get her hand on she'd use it".[4] According to Homesick James she chewed tobacco all the time including whenever she sang or played her guitar, and always had a cup at hand in case she wanted to spit.[27] Most of the music she made was autobiographical; Minnie expressed a lot of her personal life through her music.[citation needed]

Minnie was married three times.[1] Although no evidence has been found of any marriage certificates,[28] her first husband is usually said to have been Will Weldon whom she married in the early 1920s. Her second husband was guitarist and mandolin player Joe McCoy (aka Kansas Joe McCoy) whom she married in 1929. They filed for divorce in 1934, with McCoy's jealousy of Minnie's rise to fame and success often being said to be the reason.[29] Around 1938 she met guitarist Ernest Lawlars (aka Little Son Joe). He became her new musical partner and they married shortly thereafter,[30] with Minnie's name being given in her union records as "Minnie Lawlars" from 1939.[31] Son Joe dedicated songs to her including "Key to The World" in which he addresses her as "the woman I got now" and calls her "the key to the world." Minnie was also reported to have lived with a man known as "Squirrel" in the mid- to late 1930s.[32]

Minnie was not religious and rarely went to church; the only time she was reported to have gone to church was to see a Gospel group perform.[29] While she was baptised shortly before she died, this was probably done to please her sister Daisy Johnson.[33] The home she once lived in still exists at 1355 Adelaide Street in Memphis, Tennessee.[34]

Memphis Minnie has been described as "the most popular female country blues singer of all time",[35] while Big Bill Broonzy said that she could "pick a guitar and sing as good as any man I've ever heard."[12] Minnie lived to see her reputation revived in the 1960s as part of the general revival of interest in the blues. She was an influence on later singers such as Big Mama Thornton, Jo Ann Kelly[1] and Erin Harpe[36] and was inducted into the Blues Foundation's Hall of Fame in 1980.[37]

"Me and My Chauffeur Blues" was recorded by Jefferson Airplane on their debut album Jefferson Airplane Takes Off, with Signe Anderson as lead vocalist. "Can I Do It for You" was recorded by Donovan in 1965, under the title "Hey Gyp (Dig the Slowness)". A 1929 Memphis Minnie and Kansas Joe McCoy song, "When the Levee Breaks",[38] was adapted (with altered lyrics and a different melody) by Led Zeppelin and released in 1971 on their fourth album. "I'm Sailin'" was covered by Mazzy Star on their 1990 debut album She Hangs Brightly.