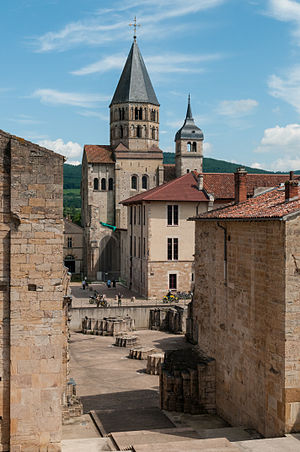 What is called the mendicant movement in Church history took place primarily in the 13th century in Western Europe. Up until that time the monks of Europe worked at their trade in their monastery. While renouncing personal property, they owned all things in common as a community after the example of chapters 2 and 4 of the Acts of the Apostles.[1]

With the rise of Western monasticism, monasteries attracted not only individuals aspiring to become monks and nuns, but also property, buildings and riches. The idea that Christ came down to earth poor and that the true Church must be the church of the poor clashed with this image. The desire for true Christian authenticity was thus in contrast to the reality of the empirical Church.[2]

The twelfth century saw great changes in western Europe. As commerce revived, urban centers arose and with them an urban middle class. New directions in spirituality were called for. Ecclesiastical reform became a major theme of the cultural revival of this era. In response to this crisis, there emerged the new mendicant orders founded by Francis of Assisi (c.1181-1226) and Dominic Guzman (c.1170-1221).[3]

The mendicant friars were bound by a vow of poverty and dedication to an ascetic way of life, renouncing property and traveling the world to preach. Their survival was dependent upon the good will of their listeners. It was this way of life that gave them their name, "mendicant," derived from the Latin mendicare, meaning "to beg."[4]

The mendicant movement had started in France and Italy and became popular in the poorer towns and cities of Europe at the beginning of the thirteenth century. Their refusal to own property and therefore to pay taxes threatened the stability of the established church Church which was then planning a crusade, to be financed by tithes. Thus some mendicant orders were officially suppressed by Pope Gregory X at the Second Council of Lyon in 1274 and others reformed, so as to be capable of contributing funds or men to support the war effort.[5][6]

Francis came to this through a period of personal conversion. The Franciscans spread far and wide the devotion to the humanity of Christ, with the commitment to imitate the Lord.[2] The Franciscan movement summarized and surpassed all the others. This was not only in the obvious holiness of Francis of Assisi, but also in the personality of the followers whom Francis attracted. Many of them were priests and men of learning whose contributions were notable in the rapid evolution and contemporary relevance of the movement.[1] Notable Franciscans include Anthony of Padua, who were inspirations to the formation of Christian mendicant traditions.

While on a visit to southern France, Saint Dominic met the Albigensians, a religious sect which had a great popularity partly because of the economic situation of the times. Dominic responded to a desperate need for informed preaching by founding the Order of Preachers. He began a new form of religious life, the life of the friar. Before this time, religious life had been monastic, but with Dominic the secluded monastery gave way to priories in the cities. By the time of his death in 1221, the Order had spread through Western Europe, hundreds of young men had joined, and the presence of the Order of Preachers was felt at the major universities of the time.[7]

With deep insight the Franciscans and Dominicans put into practice a pastoral strategy suited to the social changes. The emergence of urban centers meant concentrated numbers of the homeless and the sick. This created problems for the parish churches who found themselves unable to address these issues.[8] Since many people were moving from the countryside to the cities, they no longer built their convents in rural districts but rather in urban zones.

Another entirely innovative decision, the Mendicant Orders relinquished their principle of stability, a classical principle of ancient monasticism, opting for a different approach. Unlike the Benedictine monks, the mendicants were not permanently attached to any one particular convent and to its abbot.[1] Because the orders' primary aim was the evangelization of the masses, the church granted them freedom from the jurisdiction of the bishops and they travelled about to convert or reinforce faith.[4] The freedom of mendicancy allowed Franciscans and Dominicans mobility. Since they were not tied to monasteries or territorial parishes, they were free to take the gospel into the streets, to preach, hear confessions and minister to people wherever they were.[8] Friars Minor and Preachers travelled with missionary zeal from one place to another.

Consequently they organized themselves differently in comparison with the majority of monastic Orders. Instead of the traditional autonomy that every monastery enjoyed, they gave greater importance to the Order as such and to the Superior General, as well as to the structure of the order Provinces. Their flexibility enabled them to send out the most suitable friars on specific missions and the Mendicant Orders reached North Africa, the Middle East and Northern Europe.[2]

As students and professors, Minors and Preachers entered the most famous universities of the time, set up study centres, produced texts of great value and were protagonists of scholastic theology in its best period and had an important effect on the development of thought. The great thinkers, St Thomas Aquinas and St Bonaventure, were mendicants.[2]

In all the great cities of western Europe, friaries were established, and in the universities theological chairs were held by Dominicans and Franciscans. Later in the 13th century they were joined by the other great mendicant orders of Carmelites, Augustinian Hermits and Servites.

They attracted a significant level of patronage, as much from townsfolk as aristocrats. Their focus of operation rapidly centered on towns where population growth historically outstripped the provision of rural parishes. Most medieval towns in Western Europe of any size came to possess houses of one or more of the major orders of friars. Some of their churches came to be built on grand scale with large spaces devoted to preaching, something of a specialty among the mendicant orders.

In the Middle Ages, the original mendicant orders of friars in the Church were the

The Second Council of Lyons (1274) recognized these as the five "great" mendicant orders, and suppressed certain others. The Council of Trent loosened their property restrictions. Afterwards, except for the Franciscans and their offshoot the Capuchins, members of the orders were permitted to own property collectively as do monks.

Among other mendicant orders are the

The term "mendicant" may also be used to refer to other non-Catholic and non-Christian ascetics, such as Buddhist monks and Hindu holy men. The Theravada Buddhist Pali scriptures use the term bhikkhu for mendicant, and in Mahayana scriptures, the equivalent sanskrit term bikshu is used. In Islam: Sufism, Dervishes.