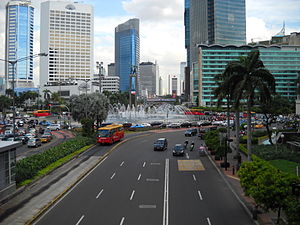 Menteng is a subdistrict of Central Jakarta, one of the administrative city which forms the special capital territory of Jakarta, Indonesia.

The subdistrict is best known as the location of the Menteng residential area, a new urban design developed in the 1910s to become a residential area for Dutch people and high officials. At the time of its development, the area was the first planned garden suburb in colonial Batavia. Supported by easy access to service centers and nearby to the central business district, this area has become one of the most expensive areas for residential real estate in Jakarta. Several important people such as former president Suharto take up residence in Menteng. The President of the United States Barack Obama spent his childhood in Menteng, attending local schools including Besuki Public School and St. Francis of Assisi School.[1][2][3]

Menteng Subdistrict is located to the south of Merdeka Square. It is roughly bounded by Kebon Sirih Road to the north, a canal to the west, the canal Kali Malang to the south, and the river Ciliwung to the east.

The subdistrict of Menteng is divided into five kelurahan or administrative villages:

The southern area of the Menteng Project.

Known as the location of the house where the Proclamation of Indonesian Independence was read.

The northern area of the Menteng Project. 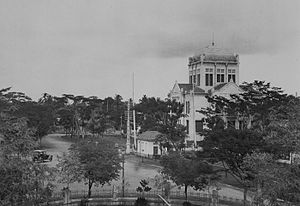 Menteng Project was the most ambitious residential planning project between 1910 and 1939.[4] The project was meant to be the southern expansion of the city Batavia.[6] Karsten, in his 1939 memorandum to the colonial government, referring to Menteng Project and several other residential projects in the Indies - pointed out that real estate offices and the building trade have turned their attention to the needs of the upper middle class - particularly those of the Europeans, but moreover those of the small category categories of the other population groups in that class (i.e. natives and foreign orientals, mostly Chinese).[4]

The land that is now Menteng residential area was originally privately owned estates Menteng and Gondangdia. In 1755-1762, the Menteng estate belonged to a Moor Assan Nina Daut between.[6] In 1790, the land was handed over to Pieter J. du Chene de Vienne.[6] In 1815, the land was handed over to Jakob P. Barends.[6] In 1867, the land was handed over to an Arab man from Hadramaut, one of the recorded descendant was the Shahap/Shahab family who were the landlord of the private land in what is now Menteng from 1881 to 1990, as recorded in the 1817 Regerings-Almanak.[6] In 1890, this private land was an estate of 73 hectares inhabited by 3,562 peasants, situated south of Kebon Sirih neighborhood (south of Koningsplein).[4] In 1901 the land recorded as being used for rice paddies, fields and coconut plantation.[6]

When the city of Batavia was confident to absorb new supply of middle-class housing – as well as to prevent further illegal kampung development from encroaching onto this area – the city decided to purchase the Menteng land and created the technical commission to oversee its development. De Bouwploeg was established to acquire a plot of land in Menteng and another 73 hectare of land from the Gondangdia private estate. The land in Gondangdia private estate was bought by Bouw- en Cultuur Maatschappij Gondangdia from a Dutch widow J.V.D. Bergh in 1892, which at that time inhabited by 3,052 peasants.[6]

Moojen's original plan for Menteng resembles the garden city model of Ebenezer Howard. The plan combined wide cross-cutting boulevards with concentric rings of streets and a central public square. At the northern entrance to the Menteng residential area, he designed civic landmarks: the Art Center, the cultural center of early 20th-century Batavia.[4]

Although planning for Menteng began in 1910, it was not until 1912 that Moojen's revised plan was officially unveiled. Key difference with the original garden city model was that Menteng was not intended to be a freestanding, self-contained place, but to link up with adjacent residential areas. For example, the broad Nassau Boulevard (now Jalan Imam Bonjol) that bisected the Menteng residential area adjacent to the central square (now Taman Suropati) was intended to connect Tanah Abang (an important market place) to the west and Meester Cornelis to the east. The Java Street (Javaweg, now Jalan HOS Cokroaminoto) was to serve as a north-south connector from Kebon Sirih to the southern fringe of Batavia, the boundary was marked at that time by the line of a flood canal.[4]

Moojen's plan was later extensively modified by F.J. Kubatz as part of the city's next development plan. In the Kubatz plan, the street pattern was changed and a small pond (Situ Lembang) was added to the east of the central park area, originally named Bisschooplein after G.J. Bishop, mayor of Batavia (1916-1920). Other architects contributed to the character of Menteng Residential Area through landmarks. Architect Ghijsels designed Indies-styled houses, St. Paul's Church and the adjacent Logegebouw, which was the office of the burgemester, centrally positioned and facing the central park (now the Indonesian national development planning board (BAPPENAS)). Ghijsels's colleagues in the AIA, architect J.F.L. Blankenberg, designed some lavish residences in Menteng between 1926 to 1939 (after Ghijsels had returned to the Netherlands) e.g. the home of the owner of Wellenstein & Krausse Company (1926,[7] now the residence of the US Ambassador to Indonesia), home of the Governor of Jakarta (1939),[8] and several lavish residences for local businessmen along Jalan Imam Bonjol (one of them is now the National Proclamation Museum).[4]

During the 1932-1937 Great Depression, development of Menteng slowed down. During the period, houses in Menteng were built in two levels, partly to expand the building area without having to increase land plot.[6] These two-floors buildings were partly inspired by similar houses designed by Moojen in Kramat V-VII in 1919. These houses in Menteng were located in van Heutszboulevard (Jalan Teuku Umar), van Breen weg (Jalan Latuharhari), Nassau Boulevard (Jalan Imam Bonjol) and Oranje Boulevard (Jalan Diponegoro).[6] After the crisis, development was enacted again, such as the construction of St. Paul's Church.

Menteng Project provided commissions for growing architect and planning firms that had set up in Batavia, which included M.J. Hulswit, the very prominent A.A. Fermont and Eduard Cuypers, Biezeveld and Moojen, Bakker and Meyboom, AIA. Other firms active in Menteng Project were Semarang-based Karsten, Lutjens, Toussaint, and Henri Maclaine Pont; and Bandung-based C.P. Schoemaker and Associates. 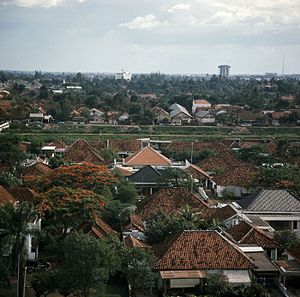 Menteng residential area in the 1970s.

In the post-colonial period, the prestige of Menteng was transferred to the indigenous urban elite of Jakarta. Escalating land values in the center of Jakarta exerted pressures on the edges of Menteng to convert to more intensive non-residential uses in later years. A 1975 gubernatorial decree declared Menteng a cultural heritage area, citing its distinctive architecture, which often includes high, slanting roofs and ample gardens.[9] During the 1980s, the west part of Menteng was transformed into a commercial area, such as Sabang Street (now Agus Salim street), Jaksa Street, Teuku Cik Di Tiro Street, and Menteng Raya Street. Most of them changed into shops, hotels, offices, and restaurants. The Jalan Jaksa Festival is held every year in Jaksa Street.[10] Since the 1990s, a community of architects, historians, preservationists, and re-greening advocates tried to the preserve the quality of the Menteng original plan.[4]

Menteng Project was the first housing project in Jakarta that follows the first law of urban planning in Batavia, known as Bataviasche Bouwverordening.[11] Menteng was influential in the introduction of a new Indies architectural language. New Indies Style, a modern architectural movement in the Dutch Indies, was strongly implemented in Menteng. The new style combines the old Indisch style one-storey villas with modern two-storey structures.[4] Prominent roof form (e.g. mansard roof and pyramid-shaped hip roof) was characteristic of house design in Menteng. Other characteristic element of houses in Menteng were front terraces, wide courtyard, characteristic textures in the wall, tall windows and doors with cross ventilations. Other architectural style popular in Menteng during its development were mostly early 20th-century modern movement e.g. Art Deco, Dutch Nieuwe Zakelijkheid, the original New Indies Stlye, and Art Nouveau.[11] Older style e.g. Classicist Empire Style and Old Indies Style sometimes appear in the architecture of old villas at the fringe of Menteng Project, some are converted into museums, otherwise demolished for new development.

The residences of Menteng area was classified into several classes according to a recommendation by the Department of Civil Works (Burgerlijke Openbare Werken):

Mid-high class residences The residence was classified as class 1 to 3. The houses of these type were built in the core area of Menteng and were targeted for high officials and high class Dutch or European civilians. The architecture style was known as "Transitional Period" (Overgangs periode), which is the style of architecture between the latest stage of "Oud Indische Huis" style, with its typical wide courtyard and wide terraces, to the more modern style called the New Indies Style or the "European Villa". The area is connected with wide boulevards.[11]

Houses in this class are generally one or two floored free-standing house (vrijstaand huis) with one or two wings/pavilions attached to the main building.[11] Examples are the lavish houses along Jalan Imam Bonjol and surrounding Taman Suropati.

Mid-low class residences The residence was classified as class 4 to 7. These are the most dominant type of houses in Menteng. The architecture style is a fusion between the Dutch Transitional Period houses and local traditional houses. The area is connected with narrower streets, classified in Dutch as Laan, Straat or Weg. There were three types of small villas, the Tosari, the Sumenep, and the Madura, all were designed with garage and house servants facilities kept under 500 sqm, a prototype for houses in modern Indonesia.[4]

Residence class 6 and 7 were targeted for the colonial government officials and was known as Land Woningen Voor Ambtenaren (Dutch "Country Houses for Officials"). Generally, these houses are one-floored and can sometimes be a semi-detached house (Dutch koppel).

Entree Gondangdia ("Gondangdia Entrance") was constructed when Moojen designed and constructed the Bataviasche Kunstkring (1913-1914). The area which was formed by what is now Jalan Cut Meutia - Railtrack - Jalan Gondangdia was the oldest part of Menteng.[12]

The master plan of Menteng included some facilities and infrastructures:

Sarinah Department Store, one of the earliest modern department store in Jakarta.