The Mercedes-Benz 300 SL (W198) was the first iteration of the SL-Class grand tourer and fastest production car of its day. Introduced in 1954 as a two-seat coupé with distinctive gull-wing doors, it was later offered as an open roadster.

The idea of a toned-down Gran Prix car tailored to affluent performance enthusiasts in the booming post-war American market was suggested by Max Hoffman. Mercedes accepted the gamble and the new 300 SL – 300 for its 3.0 litre engine displacement and SL for Sport Leicht (Sport Light) – was introduced at the 1954 New York Auto Show rather than the Frankfurt or Geneva gatherings company models made their usual debuts.

Immediately successful and today iconic, the 300 SL stood alone with its distinctive doors, first-ever production fuel-injection, and world's fastest top speed. The original coupé was available from March 1955 to 1957, the roadster from 1957 to 1963.

A race car for the street

New York Mercedes distributor Max Hoffman, Daimler-Benz's official importer in the USA, suggested to Daimler-Benz AG management in Stuttgart that a street version of the W194 Gran Prix racer would be a commercial success, especially in America.

Even with the upward opening doors, the 300 SL had an unusually high sill, making entry and exit from the car's cockpit problematic. A steering wheel with a tilt-away column was added to improve driver access.

The 300 SL's main body was steel, with aluminum hood, doors and trunk lid. It could also be ordered with an 80 kg (176 lb) saving all-aluminium outer skin at tremendous added cost; just 29 were made.

More than 80% of the vehicle's total production of approximately 1400 units were sold in the US, making the Gullwing the first Mercedes-Benz widely successful outside its home market and thoroughly validating Hoffman's prediction. The 300 SL is credited with changing the company's image in America from a manufacturer of solid but staid luxury automobiles to one capable of rendering high-performance sports cars. 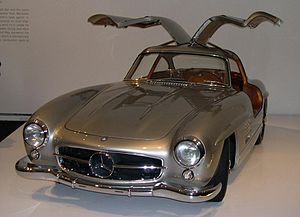 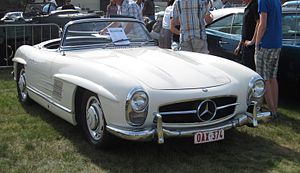 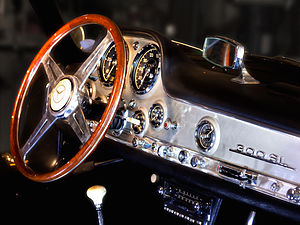 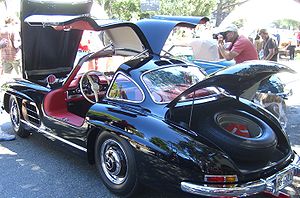 Like the W194, the 300 SL borrowed its 3.0 litre overhead cam straight-6 from the regular four-door 300 (W189 "Adenauer") luxury tourer introduced in 1951. Featuring an innovative diagonal aluminum head that allowed for larger intake and exhaust valves, it was canted to the right at forty-five-degrees to fit under the SL's considerably lower hoodline.

In place of the W194's triple two-barrel Solex carburators, a groundbreaking Bosch mechanical direct fuel injection was installed, boosting power almost 25% over the Gran Prix car's. Derived from the DB 601 V12 used on the high-powered Messerschmitt Bf 109E fighter of World War II, it raised output from 175 hp (130 kW) to 215 hp (160 kW), almost double that of the original Type 300 sedan's 115 hp (86 kW). The result was a top speed of up to 260 km/h (161 mph) depending on gear ratio and drag, making the 300 SL the fastest production car of its time.

However, unlike today's electrically powered fuel injection systems, the 300 SL's mechanical fuel pump would continue to inject gasoline into the engine during the interval between shutting off the ignition and the engine's coming to a stop; this unburned gasoline washed lubricating oil from the cylinder walls, which not only left them unprotected in affected areas during start-up but would dilute the engine's entire oil supply if the car was not driven hard or long enough to reach a sufficient temperature to evaporate the gas out of the oil. To reduce the dilution of oil by gasoline when stopping the engine, the owner's manual advised

turn the ignition key to the left while idling. Do not on any account try to stop the engine at a higher speed.

Exacerbating the problem was the engine's large racing-oriented oil cooler and enormous 10 liter oil capacity, which virtually guaranteed the oil would not get hot enough. In practice, many owners would block off airflow through the oil cooler and stick rigidly to the appropriately low 1,000 miles (1,600 km) recommended oil change interval. An auxiliary fuel pump provided additional fuel for extended high speed operation or cold starts; overuse would also lead to dilution of the oil.,[3][4]

Clutch operation was initially very heavy, remedied by an improved clutch arm helper spring which reduced pedal force. From March 1963 to the end of production later that year, a light alloy crankcase was used on a total of 209 vehicles.[5]

Aerodynamics played an important role in the car's speed, with Mercedes-Benz engineers placing horizontal "eyebrows" over the wheel openings to reduce drag. Unlike many cars of the 1950s, steering was relatively precise and the four-wheel independent suspension allowed for a reasonably comfortable ride and markedly better overall handling. However, the rear swing axle, jointed only at the differential, not at the wheels themselves, could be treacherous at high speeds or on imperfect roads due to extreme changes in camber. The enormous fuel tank capacity also caused a considerable difference in handling depending on the quantity of fuel on board.

Werner Engel won the 1955 European Rally Championship driving a 300 SL. The car also had a victory in the Rali Vinho da Madeira in 1960. 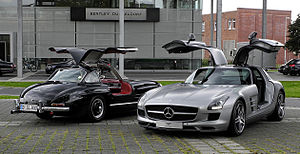 300 SL beside the Mercedes-Benz SLS AMG, its spiritual successor.

Today, the 300 SL with its gull wing doors, technological firsts, and low production numbers is considered one of the most collectible Mercedes-Benz models, with prices generally in the US$1,000,000–2,500,000 range.[6] Sports Car International magazine ranked the 300 SL as the number 5 sports car of all time. A pair of 300 SLs for sale in 2009 were offered at over $1.3M USD from the Foxwood Collection. In 2012, an ultra rare 1955 Mercedes-Benz 300 SL with an all-aluminum body was sold for US$4.62 million at the Scottsdale Auctions in Arizona.[6] Given the stratospheric prices that a 300 SL commands, many car enthusiast have turned towards the smaller 190 SL, often referred as the "poor man's 300 SL" as its acquisition costs are a tenth that of the 300 SL's.

Subsequent generations of the Mercedes-Benz SL-Class have been continually produced, not always in the same sporting spirit of the original 300 SL, such as the Mercedes-Benz W113 (1963–71) and the Mercedes-Benz R129 (1989–2001). In the 2000s Mercedes oriented its SL series back towards performance, and included styling nods to the 300 SL. The R230 (2002–2011) and the R231 (2012–present) have air inlets in the front fenders which are inspired by the 300 SL Gullwing.[7] However, the SL has since evolved to become a more autobahn-focused grand tourer due to increasing weight, especially with its optional V12 engine in later iterations.[8] The last two generations of the SL are hardtop convertibles with technological and comfort amenities, and it also has available heated and cooled seats with a massage function.[9]

The SLS AMG has now been replaced by a substantially less costly tourer called the AMG GT with traditional doors and a much smaller forced induction engine, designed to compete against the Porsche 911 and Audi R8.[11]

As part of a partnership between Mercedes-Benz and Nintendo, the Wii U game Mario Kart 8 features a 300 SL Roadster as a playable in-game vehicle, added as part of a post-launch downloadable game update on August 27, 2014.[12]

Mercedes-Benz also operates the Mercedes-Benz Classic Center that focuses on classic Mercedes-Benz restorations and is recognized as the central authority on 300 SL parts, service, restoration and vehicle trading as they have unique access to original build sheets and factory documentation which enables them to confirm a car's authenticity – a critical factor determining a collector car's true value.[13]