The Mercedes-Benz CLK-Class is a series of mid-size luxury coupés and convertibles produced by German car manufacturer Mercedes-Benz in two generations, although its design and styling was derived from the E-Class although technically it was based on the mechanical underpinnings of the smaller C-Class, i.e. respectively based on the W202 and W203 platforms of the C-Class. It was positioned below the Mercedes-Benz CL-Class and SL-Class, but above the SLK-Class.[1][2] The CLK name derives from the German Coupé Leicht Kompakt (or Kurz), translated Coupé-Light-Short. In 2009 Mercedes ceased to use the CLK designation moving the segment designation back to E-Class Coupe/Convertible instead, as it had called this specific line of its vehicles previously before the CLK moniker was introduced in the 1990s.

The first-generation C208/A208 CLK was introduced in 1997, and was based on the W202 Mercedes-Benz C-Class launched three years earlier. The C208 coupé was replaced by the C209 CLK-Class in 2002, although the convertible remained in production until 2003 when replaced by the A209 CLK.

The CLK 320 Coupé was introduced in the 1997 model year, powered by a 218 PS (160 kW; 215 bhp) 3.2 L V6 engine. The CLK GTR FIA GT1 racing car appeared in 1998, powered by a 5.9 L V12 engine; 25 road-going CLK GTRs were made. The CLK 320 Cabriolet and the 279 PS (205 kW; 275 bhp), 4.3 L V8-powered CLK 430 appeared in 1999. All models were available in both coupé and convertible form. In Europe, the supercharged 200 Kompressor was also available, reaching impressive 193bhp, thanks to euro2 permissive emission specs. In late 1999 for the 2000 model year, a facelift was launched which incorporated, among others, a revised instrument cluster with a bigger multifunction display, steering wheel with controls for the multifunction display and radio, Tiptronic automatic gearbox, revised bumpers and new side skirts and side-view mirror-mounted turn signals.

The CLK AMG is powered by a hand-assembled 5.4-liter V8 engine. The hardware list reads like that of a race car: super-stiff forged billet steel crankshaft, forged, weight-matched connecting rods and pistons, lightweight AMG-specific chain-driven single overhead camshafts V8 (one cam per cyl bank) with two intake and one exhaust valves per cylinder, as well as 8 coil packs and 16 spark plugs (two spark plugs per cyl). Its bore and stroke are 97mm x 92mm. The dual-resonance intake manifold with tuned runners helps create optimized torque and power outputs by taking advantage of two resonant frequencies to increase performance. The engine features a high compression ratio of 10.5:1. All of these advanced technologies help deliver a healthy 342 hp (255 kW) and 376 lb·ft (510 N·m) of torque.

The five-speed automatic transmission is adapted from the gearbox used in the V-12 S-class models, because that gearbox can take the torque. It is fully adaptive and electronically controlled, and is a stronger unit than that of the CLK430. Also a larger four-bolt driveshaft that's four inches in diameter connects to a reinforced rear differential to keep all the extra power under control. Standard traction control keeps wheelspin to a minimum, while its Electronic Stability Program (ESP) keeps the CLK on its intended path.

The standard CLK chassis is used, and while the current version is not based on the new C-Class platform, the AMG version of the CLK offers some special undercarriage components. The four-wheel independent suspension is basically the same as the lesser CLK versions, but AMG fits higher-rated springs, tighter shock valving, larger diameter anti-roll bars and stiffer suspension bushings. The resulting firmer, more controlled ride is made even tighter by its high-performance ZR-rated low-profile tires. The brakes have been enhanced as well. The huge four-wheel discs are larger and thicker than the other CLKs, and the rear discs are specially vented to enhance cooling. An anti-lock braking system is standard, while Brake Assist applies full braking force in panic stop faster than a driver could. It rides on AMG Monoblock alloy wheels, 7.5" front and 8.5" rear, shod with 225/45ZR17 and 245/40ZR17 Michelin Pilot Sport tires.

A specially-modified version of this vehicle was used during the 1997 F1 season as a Safety Car.[3]

The second generation CLK was launched in 2002; like the first generation it was available in two body styles, a hardtop coupé (C209) and a cabriolet (A209), introduced in 2004. At introduction, it was available with a 3.2-litre engine, a 5.0-litre engine, and a 5.5-litre engine. It was manufactured with diesel and petrol engines ranging from four- to eight-cylinder. In 2009 the CLK was discontinued and replaced by the C207 E-Class Coupé and A207 E-Class convertible, still based on W204 C-Class underpinnings.[citation needed] 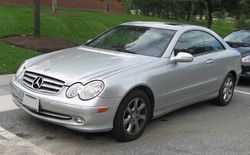 This generation of the CLK-Class is 61 mm (2.4 in) longer, 18 mm (0.7 in) wider and 28 mm (1.1 in) taller than its predecessor. In Europe the CLK was available in luxury "Elegance" or sporty "Avantgarde" specification, the former using burled walnut trim and polished alloy wheels, the latter aluminium trim and wider, sportier wheels. In the US an all-leather interior and burled walnut trim were standard. There was also a Sport upgrade package for the Avantgarde, with 18" alloys and an interior upgrade.

Performance is electronically limited to 217 km/h (135 mph) in the CLK350 model, and to 249 km/h (155 mph) in the CLK500 and CLK55 models. An AMG factory option was available for an unrestricted top speed. Safety systems included Electronic Stability Control (ESP) and Anti-lock braking system (ABS).

The 2004 CLK was the last Mercedes Benz automobile to use the D2B (Digital Data Bus) optical fibre media system introduced a decade earlier and CD-ROM based navigation system. The 2005 update included the MOST (Media Oriented Serial Transport) media system used in the rest of the Mercedes Benz line, alongside optional DVD based navigation system and iPod integration. The 2006 included an improved 3.5-liter 6-cylinder engine and added the steering wheel shift paddles from the AMG model to the CLK500.

A CLK AMG DTM was produced as a MY2006 in both a coupé and later cabriolet model. Styling cues were taken from the C-Class race car used for the German Deutsche Tourenwagen Masters racing series. The car includes a wider body, rear wing spoiler, carbon fibre accents, and upgraded suspension. 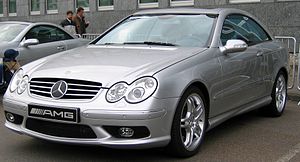 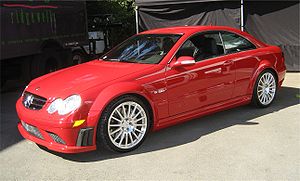 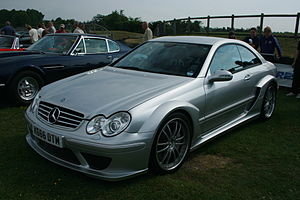 The CLK DTM AMG sports car was a special version of the C209 CLK, which looks similar to the full race car for the German Deutsche Tourenwagen Masters racing series which has to use a normally aspirated 4.0 L V8, limited to less than 500 hp. 100 Coupés and 80 Convertibles were released for sale in Europe, using AMG's supercharged 5.4 L V8, now producing 428 kW (582 hp) and 800 N·m (590 lb·ft). The front and rear track are widened by 2.9 and 4.2 inches (74 and 110 mm) respectively, and special tires and suspension modifications allow the car to pull 1.35 g (13 m/s²) of lateral acceleration. 0–100 km/h acceleration is just 3.8 seconds, and top speed is limited to 322 km/h (200 mph). In Germany, the car cost 236,060 euro after taxes. The CLK DTM AMG was only produced for the 2004 model year and the initial release of the vehicle was limited to special order or invitation of ownership.

In addition to hardtop CLK DTM AMG, 80 CLK DTM AMG Cabriolet convertible versions were made for the 2006 model year,. Compared to the coupé version, a speed limiter further reduces its top speed to 300 km/h (likely due to the top not able to withstand higher wind forces safely).

A two-door E-Class Coupé was introduced as part of the new eighth-generation E-Class, at the 2009 Geneva Motor Show, as Mercedes-Benz intended to leverage the better-known E-Class nameplate. Unlike the CLK-Class, the new E-Class Coupé shares more (up to 60% of its parts) with the W212 E-Class sedan.[4] It is produced in Bremen.[1] [1][2]

The Mercedes-Benz CLK-GTR was a V12 mid-engine race car developed for the 1997 FIA GT Championship. It shared only lights and other exterior similarities with the normal CLK. Production of the required 25 road cars began in late 1998.