The Mercedes MGP W01 was a Formula One motor racing car designed and built by the Mercedes GP Petronas team for the 2010 season and was driven by the returning seven-time World Champion Michael Schumacher and Nico Rosberg. The car was revealed at the Circuit Ricardo Tormo near Valencia at the first official test of the year on February 1.[3] The team's silver livery was officially unveiled at the Mercedes-Benz Museum in Stuttgart on January 25, 2010 on the chassis of a Brawn BGP 001 following Mercedes' purchase of the championship-winning team of 2009.[4]

The team's achievements in their first season did not come close to those of Brawn the previous year, with the Mercedes battling Renault for the title of 'best of the rest' behind the leading three teams of Ferrari, McLaren and Red Bull. Rosberg finished on the podium three times, at Sepang, Shanghai and Silverstone. Schumacher's best finishes were three fourth places. He did not score a race win, podium, pole position or fastest lap for the first time since his début season in 1991, and also scored the worst finish of his F1 career at Valencia, where he finished fifteenth. Schumacher was penalised for dangerous driving after forcing his former Ferrari team-mate Rubens Barrichello towards the pit wall at 180 mph (290 km/h). At the last race in Abu Dhabi Schumacher spun while trying to overtake Rosberg and was hit by Vitantonio Liuzzi's Force India.

The team finished fourth in the Constructors' Championship, with 214 points. 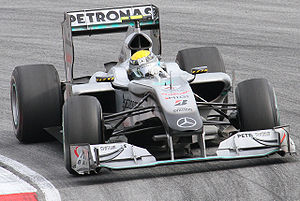 Nico Rosberg finished on the podium at the Malaysian Grand Prix; Mercedes' first podium as a works entry since 1955. 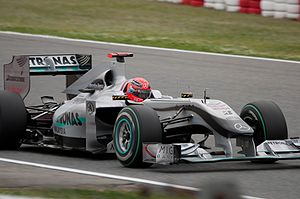 Some parts of the W01 were revised as part of the upgrade at the Spanish GP; increasing the wheelbase of the car to improve the weight distribution, as well as changing the engine cover design. The shorter wheelbase was used again at the next grand prix, deemed more suitable for the narrow streets of the Monaco GP circuit.

† Driver failed to finish, but was classified as they had completed >90% of the race distance.