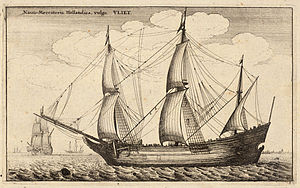 They come in a myriad of sizes and shapes from twenty-foot inflatable dive boats in Hawaii, to 5,000 passenger casino vessels on the Mississippi River, to tugboats plying New York Harbor, to 1,000 foot oil tankers and container ships at major ports, to a passenger carrying submarine in the U.S. Virgin Islands.[1]

Most countries of the world operate fleets of merchant ships. However, due to the high costs of operations, today these fleets are in many cases sailing under the flags of nations that specialize in providing manpower and services at favourable terms. Such flags are known as "flags of convenience". Currently, Liberia and Panama are particularly favoured. Ownership of the vessels can be by any country, however.

During wars, merchant ships may be used as auxiliaries to the navies of their respective countries, and are called upon to deliver military personnel and material.

The term "commercial vessel" is defined by the United States Coast Guard as any vessel (i.e. boat or ship) engaged in commercial trade or that carries passengers for hire.

Merchant ships names are prefixed by which kind of vessel they are:[citation needed]

Merchant ships may be divided into several categories, according to their purpose and/or size.[citation needed]

For more details on this topic, see Cargo ship. 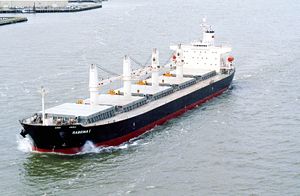 Sabrina I carries bulk cargo inside her holds.

A cargo ship or freighter is any sort of ship or vessel that carries cargo, goods, and materials from one port to another. Thousands of cargo carriers ply the world's seas and oceans each year; they handle the bulk of international trade. Cargo ships are usually specially designed for the task, often being equipped with cranes and other mechanisms to load and unload, and come in all sizes.

For more details on this topic, see bulk carrier.

A bulk carrier is an ocean-going vessel used to transport bulk cargo items such as iron ore, bauxite, coal, cement, grain and similar cargo. Bulk carriers can be recognized by large box-like hatches on deck, designed to slide outboard or fold fore-and-aft to enable access for loading or discharging cargo. The dimensions of bulk carriers are often determined by the ports and sea routes that they need to serve, and by the maximum width of the Panama Canal. Most lakes are too small to accommodate bulk carriers, but a large fleet of lake freighters has been plying the Great Lakes and St. Lawrence Seaway of North America for over a century.

For more details on this topic, see Container ship.

The Colombo Express, one of the largest container ships in the world, owned and operated by Hapag-Lloyd of Germany

Container ships are cargo ships that carry all of their load in truck-size containers, in a technique called containerization. They form a common means of commercial intermodal freight transport.

For more details on this topic, see Tanker (ship).

A tanker is a ship designed to transport liquids in bulk.

Oil tankers for the transport of fluids, such as crude oil, petroleum products, liquefied petroleum gas, liquefied natural gas and chemicals, also vegetable oils, wine and other food - the tanker sector comprises one third of the world tonnage.

Tankers can range in size from several hundred tons, designed to serve small harbours and coastal settlements, to several hundred thousand tons, with these being designed for long-range haulage. A wide range of products are carried by tankers, including:

Different products require different handling and transport, thus special types of tankers have been built, such as "chemical tankers" and "oil tankers". Gas Carriers such as "LNG carriers" as they are typically known, are a relatively rare tanker designed to carry liquefied natural gas.

Among oil tankers, supertankers were designed for carrying oil around the Horn of Africa from the Middle East; the FSO Knock Nevis being the largest vessel in the world, a ULCC supertanker formerly known as Jahre Viking (Seawise Giant). It has a deadweight of 565 thousand metric tons and length of about 458 meters. The use of such large ships is in fact very unprofitable, due to the inability to operate them at full cargo capacity; hence, the production of supertankers has currently ceased. Today's largest oil tankers in comparison by gross tonnage are TI Europe, TI Asia, TI Oceania, which are the largest sailing vessels today. But even with their deadweight of 441,585 metric tons, sailing as VLCC most of the time, they do not use more than 70% of their total capacity.

Apart from pipeline transport, tankers are the only method for transporting large quantities of oil, although such tankers have caused large environmental disasters when sinking close to coastal regions, causing oil spills. See Braer, Erika, Exxon Valdez, Prestige and Torrey Canyon for examples of tankers that have been involved in oil spills.

Specialized ships, e.g. for heavy lift goods or refrigerated cargo (reefer ships), roll-on/roll-off cargo (RoRo) ships for vehicles and wheeled machinery. These ships are not very well developed, except those used as car carriers. Only this sector of the maritime industry is well developed. The current largest roll-on/roll-off cargo (RoRo) ships are Sunbelt Spirit, Liberty (ex-Faust), Phoenix Leader and Aquamarine Ace, each capable of carrying between six and nine thousand units. Another type of specialised ship is the cable ship or cable layer. These are deep-sea vessels designed and used to lay underwater cables for telecommunications, electric power transmission, or other purposes. In addition to cable layer ships, there are cable repairing ships which are tasked with finding and repairing under sea cables that break or for whatever reason became inoperable.

For more details on this topic, see Coastal trading vessel.

Coasters, smaller ships for any category of cargo which are normally not on ocean-crossing routes, but in coastwise trades. Coasters are shallow-hulled ships used for trade between locations on the same island or continent. Their shallow hulls mean that they can get through reefs where seagoing ships usually cannot (seagoing ships have a very deep hull for supplies and trade etc.).

For more details on this topic, see Passenger ship.

A passenger ship is a ship whose primary function is to carry passengers. The category does not include cargo vessels which have accommodations for limited numbers of passengers, such as the formerly ubiquitous twelve-passenger freighters in which the transport of passengers is secondary to the carriage of freight. The type does however include many classes of ships which are designed to transport substantial numbers of passengers as well as freight. Indeed, until recently virtually all ocean liners were able to transport mail, package freight and express, and other cargo in addition to passenger luggage, and were equipped with cargo holds and derricks, kingposts, or other cargo-handling gear for that purpose. Modern cruiseferries have car decks for lorries as well as the passenger's cars. Only in more recent ocean liners and in virtually all cruise ships has this cargo capacity been removed.

A ferry is a boat or ship carrying passengers and sometimes their vehicles. Ferries are also used to transport freight (in lorries and sometimes unpowered freight containers) and even railroad cars (in the case of a train ferry).