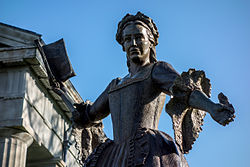 Mercy Otis Warren (September 14, [September 25, New Style][1] 1728 – October 19, 1814) was a political writer and propagandist of the American Revolution. In the eighteenth century, topics such as politics and war were thought to be the province of men. Few men and fewer women had the education or training to write about these subjects. Warren was an exception. During the years before the American Revolution, Warren published poems and plays that attacked royal authority in Massachusetts and urged colonists to resist British infringements on colonial rights and liberties.

During the debate over the United States Constitution in 1788, she issued a pamphlet, Observations on the new Constitution, and on the Federal and State Conventions written under the pseudonym "A Columbian Patriot," that opposed ratification of the document and advocated the inclusion of a Bill of Rights. Observations was long thought to be the work of other writers, most notably Elbridge Gerry. It was not until her descendant, Charles Warren, found a reference to it in a 1787 letter to British historian, Catharine Macaulay, that Warren was accredited authorship.[2] In 1790, she published a collection of poems and plays under her own name, a highly unusual occurrence for a woman at the time. In 1805, she published one of the earliest histories of the American Revolution, a three-volume History of the Rise, Progress, and Termination of the American Revolution. This was also the first history of the American Revolution to have been authored by a woman.

Mercy Otis Warren was born on September 14, 1728 (old style), the third of thirteen children and first daughter of Colonel James Otis (1702–1778) and Mary Allyne Otis (1702–1774). The family lived in West Barnstable, Massachusetts. Mary Allyne was a descendant of Mayflower passenger Edward Doty. James Otis, Sr., was a farmer, and attorney, who served as a judge for the Barnstable County Court of Common Pleas and later won election to the Massachusetts House of Representatives in 1745.[3] He was an outspoken opponent and leader against British rule and against the appointed colonial governor, Thomas Hutchinson. The Otis children were "raised in the midst of revolutionary ideals". Although Mercy had no formal education, she studied with the Reverend Jonathan Russell while he tutored her brothers Joseph and James in preparation for Harvard College. Only James went on to Harvard and later became a noted patriot and lawyer James Otis. What little of his correspondence with Mercy survives suggests that James encouraged Mercy's academic and literary efforts, treating her as an intellectual equal and confidante.[4]

Her husband James had a very distinguished political career. In 1765 he was elected to the Massachusetts House of Representatives, eventually he became speaker of the House and President of the Massachusetts Provincial Congress. He also served as paymaster to George Washington's army, for a time, during the American Revolutionary War. Mercy Warren actively participated in the political life of her husband. The Warrens became increasingly involved in the conflict between the American colonies and the British Government. The Warren’s Plymouth home was often a meeting place for local politics and revolutionaries including the Sons of Liberty. Warren became increasingly drawn to political activism and she hosted protest meetings in her home. With the assistance of her friend Samuel Adams, these meetings laid the foundation for the Committees of Correspondence. Warren wrote "no single step contributed so much to cement the union of the colonies". Like Mercy's father and brothers, the first patriots disliked the colonial governor. Mercy accordingly became a strong political voice with views on liberty, republican government and independence for the American colonies. She wrote, "Every domestic enjoyment depends on the unimpaired possession of civil and religious liberty." Mercy's husband James encouraged her to write, fondly referring to her as the "scribbler"[6] and she became his chief correspondent and sounding board.[7]

Warren formed a strong circle of friends with whom she regularly corresponded, including Abigail Adams, John Adams, Martha Washington and Hannah Winthrop, wife to John Winthrop. In a letter to Catharine Macaulay she wrote: "America stands armed with resolution and virtue; but she still recoils at the idea of drawing the sword against the nation from whom she derived her origin. Yet Britain, like an unnatural parent, is ready to plunge her dagger into the bosom of her affectionate offspring."[8] Through their correspondence they increased the awareness of women's issues, were supportive, and influenced the course of events to further America's cause.[7]

She became a correspondent and adviser to many political leaders, including Samuel Adams, John Hancock, Patrick Henry, Thomas Jefferson, George Washington and especially John Adams, who became her literary mentor in the years leading to the Revolution. In a letter to James Warren, Adams wrote, "Tell your wife that God Almighty has entrusted her with the Powers for the good of the World, which, in the cause of his Providence, he bestows on few of the human race. That instead of being a fault to use them, it would be criminal to neglect them."[9]

Since Warren knew most of the leaders of the Revolution personally, she was continually at or near the center of events from 1765 to 1789. All of Mercy Otis Warren’s work was published anonymously until 1790 when she published Poems, Dramatic and Miscellaneous, the first work bearing her name. The book contains eighteen political poems and two plays. The two dramas, The Sack of Rome and The Ladies of Castille, deal with liberty, social and moral values that were necessary to the success of the new republic.[7] She wrote several plays, including the satiric The Adulateur (1772). Directed against Governor Thomas Hutchinson of Massachusetts, the play foretold the War of Revolution.

In 1773, she wrote The Defeat, also featuring the character based on Hutchinson, and in 1775 Warren published The Group, a satire conjecturing what would happen if the British king abrogated the Massachusetts charter of rights. The anonymously published The Blockheads (1776) and The Motley Assembly (1779) are also attributed to her. In 1788 she published Observations on the New Constitution, whose ratification she opposed as an Anti-Federalist. Mercy Otis Warren is regarded as being among the most influential writers of the Revolutionary war.[citation needed] 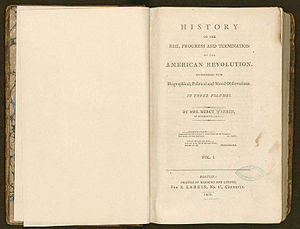 History of the Rise, Progress and Termination of the American Revolution (1805)

In 1790 she published Poems, Dramatic and Miscellaneous, the first work bearing her name. The book contains eighteen political poems and two plays. The two plays are called, The Sack of Rome and The Ladies of Castille, deal with liberty, social and moral values that were necessary to the success of the new republic.[7]

In 1805, she completed her literary career with a three-volume History of the Rise, Progress, and Termination of the American Revolution. President Thomas Jefferson ordered subscriptions for himself and his cabinet and noted his "anticipation of her truthful account of the last thirty years that will furnish a more instructive lesson to mankind than any equal period known in history".[10] The book's sharp comments on John Adams led to a heated correspondence and a breach in their friendship that lasted until 1812.

Mercy Otis Warren died on October 19, 1814, at the age of 86. She is buried at Burial Hill, Plymouth, Massachusetts. The SS Mercy Warren, a World War II Liberty ship launched in 1943, was named in her honor. In 2002, she was inducted into the National Women's Hall of Fame in Seneca Falls, New York. She is remembered on the Boston Women's Heritage Trail.[11] Her great-great grandson, Charles Warren became a distinguished lawyer and historian.