On September 20, 1926, Mercyhurst College opened its doors just a few blocks away from the city's southern boundary. It was founded by the Sisters of Mercy of the Diocese of Erie, who were led by Mother M. Borgia Egan, who became the first president of Mercyhurst College. The college received its charter on October 5, 1928, after Mother Egan convinced the state that the Sisters of Mercy were a living endowment for the college and worth just as much as a monetary endowment.[3]

From the beginning, Mother Egan was determined to make Mercyhurst the "beauty spot in the diocese of Erie." Wanting the institution to be a masterpiece of harmony, she directed that the exterior of the college be given as much attention as its interior by hiring prominent architect F. Ferdinand Durang of Philadelphia to create Old Main. It became a masterpiece of English Gothic design and stateliness that has the suggestion of a medieval castle in its lines. With the addition of the college gates in 1950, the Mercyhurst campus became a city landmark.[3]

In 1963, the prep department separated to form Mercyhurst Preparatory School, which is located behind the university. On February 3, 1969, the board of trustees voted to make Mercyhurst a coed college. From its foundation in 1926 until 1972, members of the Sisters of Mercy had been presidents of the college. After 1972, lay presidents led the college. On March 27, 1991, Mercyhurst purchased the 100-year-old Redemptorist Seminary in North East and turned it into a branch campus offering associate degrees and one-year certificates.[3]

In the past two decades, Mercyhurst has become one of the top comprehensive colleges in the North and the second largest Mercy college in America. Among its five campuses, enrollment has grown to well over 4,000 students while full-time faculty employment numbers includes 168 members. The endowment has increased to more than $20 million and its budget is more than $85 million.[3]

A $40 million program of building and campus renovation has changed the look of Mercyhurst's 50 structures during the past 20 years. Then, in fall 2002, the $7.5 million Audrey Hirt Academic Center opened on the southeast edge of campus, a building funded largely through the college’s $22.8 million capital campaign.[3]

On October 10, 2004 the Erie Times-News published a story stating that former Mercyhurst President Dr. William Garvey molested grade school boys while serving as a basketball coach at St. John the Baptist Catholic Church in Erie. The article further stated that "two current Erie residents told the Erie Times-News that Garvey paid them to have sex with him in the early to mid-1980s, when both men were minors."[4] On December 17 the paper reported that Garvey "abruptly announced his retirement Thursday, months before the completion of a college-ordered investigation Garvey had predicted would exonerate him."[5] Several months after Garvey retired, an investigation conducted by retired Erie County Judge Michael Palmisano, at the instruction of the board of trustees, determined that the allegations against Garvey "appear[ed] to have merit".[6][6] The University has a park, Garvey Park, named in honor of the former President.[7]

Also in 2005, the board of trustees authorized the purchase of 400 acres (1.6 km2) in Girard as the first step towards developing Mercyhurst West, a two-year college serving western Erie County, northwestern Crawford County and northeastern Ohio.[3]

The board of trustees elected Dr. Thomas J. Gamble as the 11th president of Mercyhurst College. Dr. Gamble, who previously served as vice president of academic affairs at the college, assumed the presidency March 1, 2006.[3]

Opened in September 2012 is the Center for Academic Engagement, a four-story, 31,000-square-foot (2,900 m2) building that will be set into the rolling hill north of Hammermill Library and feature a skywalk over East Main Drive to connect the two facilities. The building, which boasts many green technologies, houses classrooms and lab space for two of Mercyhurst’s signature programs—Intelligence Studies and Hospitality Management—as well as the Evelyn Lincoln Institute for Ethics and Society and the Mercyhurst Center for Applied Politics (MCAP).[3]

Mercyhurst University continues to be guided by the legacy of its founders, the Sisters of Mercy, in educating students in a culture where faith and reason flourish together; where the beauty and power of the liberal arts combine with an appreciation for the dignity of work; and a commitment to serving others.[3]

Consistent with its Catholic identity and Mercy heritage, Mercyhurst University educates women and men in a culture where faith and reason flourish together, where the beauty and power of the liberal arts combine with an appreciation for the dignity of work and a commitment to serving others. Confident in the strength of its student-faculty bonds, the university community is inspired by the image of students whose choices, in life and work, will enable them to realize the human and spiritual values embedded in everyday realities and to exercise leadership in service toward a just world. [9]

Enrollment at Mercyhurst University's Erie campus is nearly 4,500 students. Michael T. Victor, J.D., LL.D. is the current president. The university currently is on a trimester calendar and moved to a 4-1-4 calendar for the 2013-2014 school year.[10]

The University still maintains its campus 18 miles (29 km) in North East, Pennsylvania at the site of the former St. Mary's Seminary.[11]

The University has also operated Mercyhurst Corry, a school offering an associate degree in business administration, for over 25 years. Meanwhile, a new campus location at the Booker T. Washington Center makes it easier for disadvantaged members of the Erie community to attain a college degree.

The University's fifth campus, Mercyhurst West, is located in Girard, Pennsylvania, at the site of the former Faith Lutheran Church. Classes began at this location in fall 2006.[12] Due to low enrollment, this campus will close at the end of the 2013-2014 school year. [13] 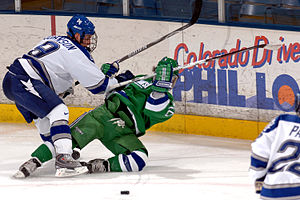 A Mercyhurst hockey player (center) jostling for the puck with an Air Force Falcons defenceman.

Mercyhurst University competes in three NCAA Division I and 22 NCAA Division II sports as the Mercyhurst Lakers. The Lakers are one of the newest members of the Pennsylvania State Athletic Conference (PSAC). Around 15 percent of the student body consists of student-athletes.