From Infogalactic: the planetary knowledge core
Jump to: navigation, search
For the astronomical concept, see Meridian (astronomy). For other uses, see Meridian.

A (geographical) meridian (or line of longitude) is the half of an imaginary great circle on the Earth's surface, terminated by the North Pole and the South Pole, connecting points of equal longitude. The position of a point along the meridian is given by its latitude. Each meridian is perpendicular to all circles of latitude. Each is also the same length, being half of a great circle on the Earth's surface and therefore measuring 20,003.93 km (12,429.9 miles). 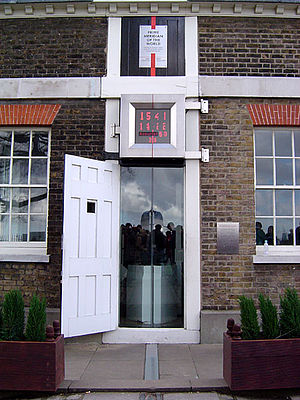 The prime meridian at Greenwich, England. The meridian is actually 102.5 meters east of this point since the adoption of WGS84.

The meridian through Greenwich (inside Greenwich Park), England, also called the Prime Meridian, was set at zero degrees of longitude, while other meridians were defined by the angle at the center of the earth between where it and the prime meridian cross the equator. As there are 360 degrees in a circle, the meridian on the opposite side of the earth from Greenwich, forming the other half of a circle with the one through Greenwich, is 180° longitude, and the others lie between 0° and 180° of West longitude in the Western Hemisphere (West of Greenwich) and between 0° and 180° of East longitude in the Eastern Hemisphere (East of Greenwich). Most maps show the lines of longitude.

The position of the meridian has changed a few times throughout history, mainly due to the transit observatory being built next door to the previous one (to maintain the service to shipping). Such changes had no significant effect. Historically, the average error in the determination of longitude was much larger than the change in position. The adoption of WGS84 as the positioning system, has moved the meridian 102.5 metres east of its last position (measured at Greenwich). The position of the current meridian is not identified at all in Greenwich but is located using a GPS receiver.

The term "meridian" comes from the Latin meridies, meaning "midday"; the sun crosses a given meridian midway between the times of sunrise and sunset on that meridian. The same Latin stem gives rise to the terms a.m. (ante meridiem) and p.m. (post meridiem) used to disambiguate hours of the day when utilizing the 12-hour clock.