Merneptah (or Merenptah) was the fourth ruler of the Nineteenth Dynasty of Ancient Egypt. He ruled Egypt for almost ten years between late July or early August 1213 and May 2, 1203 BC, according to contemporary historical records.[2] He was the thirteenth son of Ramesses II[3] and only came to power because all his older brothers, including his full brother Khaemwaset or Khaemwase, had died. By the time he ascended to the throne he was almost sixty years old. His throne name was Ba-en-re Mery-netjeru, which means "The Soul of Ra, Beloved of the Gods".

Merneptah was probably the fourth child of Isetnofret, the second wife of Ramesses II, and he was married to Queen Isetnofret, his royal wife, who was likely his full sister bearing the name of their mother. It is presumed that Merneptah also was married to Queen Takhat and one of their sons would become the later Nineteenth Dynasty pharaoh, Seti II. They also were the parents of prince Merenptah and possibly the usurper, Amenmesse, and Queen Twosret, wife of Seti II and later pharaoh in her own right.

Merneptah had to carry out several military campaigns during his reign. In year 5 he fought against the Libyans, who—with the assistance of the Sea Peoples—were threatening Egypt from the West. Merneptah led a victorious six-hour battle against a combined Libyan and Sea People force at the city of Perire, probably located on the western edge of the Delta. His account of this campaign against the Sea Peoples and Libu is described in prose on a wall beside the sixth pylon at Karnak, which states:

[Beginning of the victory that his majesty achieved in the land of Libya] -i, Ekwesh, Teresh, Lukka, Sherden, Shekelesh, Northerners coming from all lands.

Later in the inscription Merneptah receives news of the attack:

... the third season, saying: 'The wretched, fallen chief of Libya, Meryre, son of Ded, has fallen upon the country of Tehenu with his bowmen--Sherden, Shekelesh, Ekwesh, Lukka, Teresh, Taking the best of every warrior and every man of war of his country. He has brought his wife and his children--leaders of the camp, and he has reached the western boundary in the fields of Perire.'[4]

In the Athribis Stele, in the garden of Cairo Museum, it states "His majesty was enraged at their report, like a lion", assembled his court and gave a rousing speech. Later he dreamed he saw Ptah handing him a sword and saying "Take thou (it) and banish thou the fearful heart from thee." When the bowmen went forth, says the inscription, "Amun was with them as a shield." After six hours the surviving Nine Bows threw down their weapons, abandoned their baggage and dependents, and ran for their lives. Merneptah states that he defeated the invasion, killing 6,000 soldiers and taking 9,000 prisoners. To be sure of the numbers, among other things, he took the penises of all uncircumcised enemy dead and the hands of all the circumcised, from which history learns that the Ekwesh were circumcised, a fact causing some to doubt they were Greek.

There is also an account of the same events in the form of a poem from the Merneptah Stele, widely known as the Israel Stele, which makes reference to the supposed utter destruction of Israel in a campaign prior to his 5th year in Canaan: "Israel has been wiped out...its seed is no more." This is the first recognised ancient Egyptian record of the existence of Israel--"not as a country or city, but as a tribe" or people.[5] 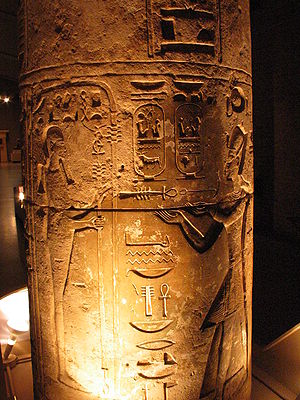 Merneptah makes an offering to Ptah on a column

Merneptah was already an elderly man in his late 60s, if not early 70s, when he assumed the throne.[6] Merneptah moved the administrative center of Egypt from Piramesse (Pi-Ramesses), his father's capital, back to Memphis, where he constructed a royal palace next to the temple of Ptah. This palace was excavated in 1915 by the University of Pennsylvania Museum, led by Clarence Fischer.

Merneptah's successor, Seti II, was a son of Queen Isetnofret. However, Seti II's accession to the throne was not unchallenged: a rival king named Amenmesse, who was either another son of Merneptah by Takhat or, much less likely, of Ramesses II, seized control of Upper Egypt and Kush during the middle of Seti II's reign. Seti was able to reassert his authority over Thebes in his fifth year, only after he overcame Amenmesse. It is possible that before seizing Upper Egypt, Amenmesse had been known as Messuwy and had been viceroy of Kush. 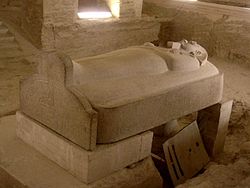 Stone sarcophagus of Merneptah in KV8.

Merneptah suffered from arthritis and atherosclerosis and died an old man after a reign which lasted for nearly a decade. Merneptah was originally buried within tomb KV8 in the Valley of the Kings, but his mummy was not found there. In 1898 it was located along with eighteen other mummies in the mummy cache found in the tomb of Amenhotep II (KV35) by Victor Loret. Merneptah's mummy was taken to Cairo and eventually unwrapped by Dr. G. Elliott Smith on July 8, 1907. Dr Smith notes that:

The body is that of an old man and is 1 meter 714 millimeters in height. Merneptah was almost completely bald, only a narrow fringe of white hair (now cut so close as to be seen only with difficulty) remaining on the temples and occiput. A few short (about 2 mill) black hairs were found on the upper lip and scattered, closely clipped hairs on the cheeks and chin. The general aspect of the face recalls that of Ramesses II, but the form of the cranium and the measurements of the face much more nearly agree with those of his [grand]father, Seti the Great.[7]