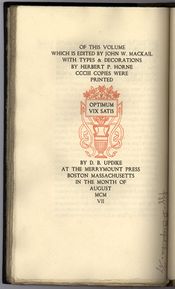 The Merrymount Press was a printing company, both scholarly and craftsmanlike, founded and run by Daniel Berkeley Updike in Boston, Massachusetts, and extant during the years 1893–1941. It was perhaps the finest representative of the Arts and Crafts movement in American book arts, influenced by William Morris and founded "to do common work uncommonly well."

Updike established his own studio in 1893, first with the idea of designing type fonts, but soon after as a printing company. He called it the Merrymount Press in honor of Mount Wollaston just south of Boston. In 1896, Updike commissioned font designer Bertram Grosvenor Goodhue to design the Merrymount font for an Altar Book for the Episcopal Church. In 1904 Herbert Horne designed Montallegro for him, and noted graphic artist and print designer Rudolph Ruzicka (1883–1978) also produced designs for the Press.

In 1899 the Merrymount Press printed Edith Wharton’s novels for Charles Scribner's Sons, which firmly established the press as a going commercial concern. The Press's finest work is generally considered to be the Book of Common Prayer (1930) financed by J. Pierpont Morgan. Without decoration, except a typographic leaf, initial letters, and rubrication, it was an austere and handsome quarto.

Updike estimated that Merrymount Press produced some 14,000 pieces of printing during its existence. Much of it was for the private collectors’ market and limited-editions clubs, but it also printed Christmas cards, bookplates, and advertising ephemera, as well as work for publishers, libraries, churches, and other institutions.

Most of the Merrymount Press archives are conserved in the Boston Athenaeum.