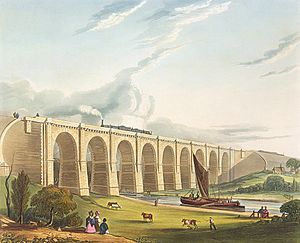 A Mersey flat on the Sankey Canal, approaching the Sankey Viaduct (1831)

A Mersey flat is a type of doubled-ended barge with rounded bilges, carvel build and fully decked. Traditionally, the hull was built of oak and the deck was pitch pine. Some had a single mast, with a fore-and-aft rig, while some had an additional mizzen mast. Despite having a flat bottom and curved sides, they were quite stable.[1] They were common from the 1730s to 1890s.[2]

As the name suggests, these flats originated on the River Mersey, but they were also used on the rivers Irwell and Weaver.[3]

Most Mersey flats had been converted to dumb barges by the end of the 19th century, towed by horses or by steam tugs. The larger Weaver flats were fitted with steam engines, and later with diesel engines, although there were still around 20 working by sail in 1935.[1] Both the Liverpool Maritime Museum and the Ellesmere Port Museum have a Mersey flat in their collections, neither of which actually worked under sail.[3]