From Infogalactic: the planetary knowledge core
Jump to: navigation, search
This article is about the city. For the province, see Mersin Province.

Mersin is a large city and a port on the Mediterranean coast of southern Turkey. It is part of an interurban agglomeration – the Adana-Mersin Metropolitan Area – and lies on the western part of Çukurova, a geographical, economical, and cultural region. According to the 17th-century traveler Evliya Çelebi, the city was named after the Mersinoğulları clan; another theory is that its name originates from the myrtle (Turkish: mersin) which grows abundantly in the region.[2]

Mersin is an important hub of Turkey's economy, and Turkey's largest seaport is located in the city. Mersin's nickname within Turkey is "Pearl of the Mediterranean" (Turkish: Akdeniz'in İncisi) and the city hosted the 2013 Mediterranean Games. Mersin is the provincial capital of the eponymous Mersin Province of Turkey.

This coast has been inhabited since the 9th millennium BC. Excavations by John Garstang of the hill of Yumuktepe have revealed 23 levels of occupation, the earliest dating from ca. 6300 BC. Fortifications were put up around 4500 BC, but the site appears to have been abandoned between 350 BC and 300 BC.

In subsequent centuries, the city became a part of many states and civilizations including the Hittites, Assyrians, Persians, Greeks, Seleucids and Lagids. During the Ancient Greek period, the city bore the name Zephyrion (Greek: Ζεφύριον[3]) and was mentioned by numerous ancient authors. Apart from its natural harbor and strategic position along the trade routes of southern Anatolia, the city profited from trade in molybdenum (white lead) from the neighbouring mines of Coreyra. Ancient sources attributed the best molybdenum to the city, which also minted its own coins.

The area later became a part of the Roman province of Cilicia, which had its capital at Tarsus, while nearby Mersin was the major port. The city, whose name was Latinized to Zephyrium, was renamed as Hadrianopolis in honor of the Roman emperor Hadrian.

After the death of the emperor Theodosius I in 395 and the subsequent permanent division of the Roman Empire, Mersin fell into what became the Byzantine Empire.

The city was an episcopal see under the Patriarchate of Antioch. Le Quien names four bishops of Zephyrium:[4][ Aerius, present at the First Council of Constantinople in 381; Zenobius, a Nestorian, the writer of a letter protesting the removal of Bishop Meletius of Mopsuestia by Patriarch John of Antioch (429–441); Hypatius, present at the Council of Chalcedon in 451; and Peter, at the Council in Trullo in 692. The bishopric is included in the Catholic Church's list of titular sees, but since the Second Vatican Council no new titular bishop of this Eastern see has been appointed.[5]

The area of Cilicia was conquered by the Arabs in the early 7th century, by which time it appears was a deserted site. After them, Then came the Egyptian Tulunids, the Byzantines between 965 and the 12th century, the Armenian Kingdom of Cilicia, Mamluks, Anatolian beyliks, and finally the city was conquered by the Ottomans from the Ramadanid Principality in 1473 and formally annexed by Selim I in 1517.

During the American Civil War, the region became a major supplier of cotton to make up for the high demand due to shortage. Railroads were extended to Mersin in 1866 from where cotton was exported by sea, and the city developed into a major trade center.

In 1909, Mersin's port hosted 645 steamships and 797,433 tons of goods. Before World War I, Mersin exported mainly sesame seeds, cottonseed, cakes and cereals, cotton, and livestock. Cotton was exported to Europe, grain to Turkey, and livestock to Egypt. Coal was the most prevalent import into Mersin at this time. Messageries Maritimes was the largest shipping line to use the port at Mersin.[6]

In 1918, Mersin was occupied by French and British troops in accordance with the Treaty of Sevrès. It was recovered by the Turkish army in 1920. In 1924, Mersin was made a province, and in 1933 Mersin and İçel provinces were joined to form the (greater Mersin) İçel province.

As of 1920, Mersin had five piers at its port, with one privately owned by a railroad company serving Mersin, Tarsus, and Adana.[7]

Mersin has a typical Mediterranean climate (Köppen climate classification: Csa), a type of subtropical climate with hot and dry summers and warm and wet winters. Mersin has its highest rainfall in winter; mainly December and January which gives Mersin its healthy, nurtured coastline. The driest months are summer with hardly any rainfall at all. 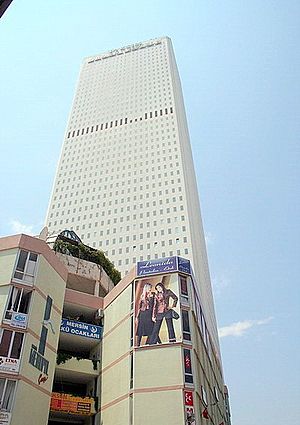 Today, Mersin is a large city spreading out along the coast, with Turkey's second tallest skyscraper[citation needed] (the 52-floor Mertim Tower, which was the tallest skyscraper in Turkey for 13 years between 1987 and 2000, until the completion of the İş Bankası Towers in Istanbul), huge hotels, an opera house, expensive real estate near the sea or up in the hills, and many other modern urban amenities.The seaside of Mersin is the longest seaside in Turkey as well as in Eastern Mediterranean. The population of the city was 940,418 (Mersin Provinces 1,705,774) according to 2013 estimates. The population of the sub municipalities within Greater Mersin is shown below:[9]

The Metropolitan Municipality is now trying to rescue the sea front with walkways, parks and statues, and there are still palm trees on the roadsides especially where the young generation like to hang out in the cafés and patisseries of smart neighbourhoods such as Pozcu or Çamlıbel. These are established neighbourhoods where there are many well-known shops and restaurants with years of experience and reputations to protect. The city centre is a maze of narrow streets and arcades of little shops and cafes, with young people buzzing around on scooters. The old quarter near the fish market is where you will find the stalls selling tantuni and grilled liver sandwiches.

One of the most distinctive features of the city as a whole is the solar heating panels, they are everywhere, on top of every building.

Turkey now plans to construct its first nuclear power plant some 80 miles west of Mersin.[10] In March 2008, Turkey opened the bidding for the construction of the plant. Environmental groups, such as Greenpeace, oppose this plan.[10]

The local cuisine is famous, and restaurants specializing on the Mersin Cuisine can be found all over Turkey, and includes specialties such as:

Historically, Mersin was a major producer of cottonseed oil.[11]

Adjacent to the port is Mersin Free Zone established in 1986, the first free zone in Turkey, with warehouses, shops, assembly-disassembly, maintenance and engineering workshops, banking and insurance, packing-repacking, labelling and exhibition facilities. The zone is a publicly owned center for foreign investors, close to major markets in the (Middle East, North Africa, East and West Europe, Russian Federation and Central Asia. The trading volume of the free zone was USD 51,8 billion in 2002.

Mersin has highway connections to the north, east and west. Mersin is also connected to the southern railroad. Adana airport is 69 kilometres (43 mi).

Mersin port is an international hub for many vessels routing to European countries. It is now operated by PSA.

Mersin University was founded in 1992 and started teaching in 1993–1994, with 11 faculties, 6 schools and 9 vocational schools. The university has had about 10 thousand graduates, has broadened its current academic staff to more than 2,100 academicians, and enrolls 22,000 students. 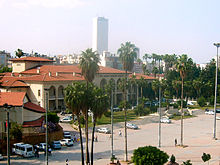 Because the city has been a crossroads for centuries, the local culture is a medley of civilizations. Mersin has a State Opera and Ballet, the fourth in Turkey after Istanbul, İzmir and Ankara. Mersin International Music Festival was established in 2001 and takes place every October. The photography association Mersin Fotoğraf Derneği (MFD), is one of the most popular and active cultural organizations in the city. Some cultural activities are sponsored by the İçel sanat kulübü (i.e., Art club of Mersin) and Mediterranean Opera and Ballet Club. There are three museums: Mersin Museum, Atatürk Museum and Mersin Naval Museum (Deniz Müzesi) .

Some of the largest mosques include the Muğdat Mosque, built in the name of a companion of the Islamic prophet, Muhammad, Miqdad ibn Aswad, and the central Mersin Grand Mosque. The Old Mosque was built by Sultan Abdul Aziz in 1865 next to a foundation (vakıf).

The Mersin Interfaith Cemetery, sometimes also called Tolerance, is renowned for being a common cemetery of all religions. It includes graves of Muslims, Christians and Jews.[12][13]

The City hosts the Roman Catholic Co-Cathedral of St. Anthony of Padua.

In order to swim in clean water you need to get out of town, perhaps an hour along the coast. The beaches at Kızkalesi, Ayaş, Susanoğlu (app. 50–70 km west) are popular with families while young people prefer Akyar, Yapraklı koy, Narlıkuyu or quieter bays along the coast, some of which are very attractive indeed.

The 10,128-seating capacity Tevfik Sırrı Gür Stadium is home to Mersin İdmanyurdu SK. Another football stadium in Mersin is the Mersin Olympic Stadium with 25,534 seating capacity. The men's and women's basketball teams of the Mersin Büyükşehir Belediyesi S.K. play their home matches at the Edip Buran Sport Hall, which has a seating capacity of 2,700.

Mersin hosted the 2013 Mediterranean Games. For this purpose, eleven new sports venues were built. The Servet Tazegül Arena, the fourth biggest indoor arena of Turkey with its 7,500 seating capacity, hosted the men's basketball events and the volleyball finals of the Games.[14] The athletics and paralympic athletics events were held at the Nevin Yanıt Athletics Complex.[15]

Mersin is twinned with: