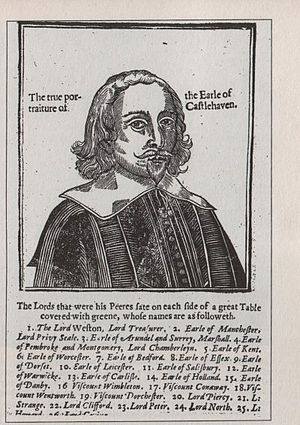 The 2nd Earl of Castlehaven, from a contemporary print published in the wake of his notorious trial.

Mervyn Tuchet (sometimes Mervin Touchet), 2nd Earl of Castlehaven (1593 – 14 May 1631), was an English nobleman who was convicted of rape and sodomy and subsequently executed.

A son of George Tuchet, 1st Earl of Castlehaven and 11th Baron Audley, by his wife, Lucy Mervyn, he was known by the courtesy title of Lord Audley during his father's lifetime, so is sometimes referred to as Mervyn Audley.[1]

He was knighted by James I in 1608, before he studied law at the Middle Temple. He served as Member of the Parliament of England for Dorset in the Addled Parliament of 1614 and was a Justice of the Peace for the counties of Dorset, Somerset, and Wiltshire.[1] He succeeded his father on 20 February 1616/7 as Earl of Castlehaven and Baron Audley. He left seven children upon his death.[2]

Sometime before 1612 (records of the marriage are lacking), Lord Audley married Elizabeth Barnham, a sister-in-law of the philosopher and scientist Francis Bacon, and with her he had six children. By all accounts the marriage was a loving and successful one, ending with her death in 1622.[3] His second marriage, on 22 July 1624, at Harefield, Middlesex, was to the former Lady Anne Stanley (1580–1647), elder daughter and co-heiress of Ferdinando Stanley, 5th Earl of Derby (by his wife, Alice Spencer), and widow of Grey Brydges, 5th Baron Chandos. They had a daughter, Anne Touchet, who died young.[4] Lady Anne was significantly older than Castlehaven,[5] and the marriage was not a success, but in 1628 Lord Castlehaven's heir was married to her thirteen-year-old daughter Elizabeth.[5]

Trial on charges of rape and sodomy

At a trial by his peers, it was stated that Henry Skipwith had arrived at Fonthill Gifford in 1621 and that within a few years he was so close to Castlehaven that he sat at the family's table and was to be addressed as "Mister Skipwith" by the servants. Several years later, Giles Broadway arrived at the house and received similar treatment. It was not long before Castlehaven was providing Skipwith with an annual pension, and he was accused of attempting to have Skipwith inseminate his daughter-in-law, to produce an heir from Skipwith instead of his son. In fact, the countess and Skipwith had an adulterous relationship.

Castlehaven's son, James, claimed that it was the extent of Castlehaven's "uxoriousness" toward his male favourites which led to his initial lodging of a complaint in October 1630.[6]

Castlehaven's trial aroused continuing public debate, and witnesses were almost certainly suborned. He maintained his innocence to the last, and the Privy Council was split on both charges, almost evenly on the sodomy charge. The case remains of interest to some as an early trial concerning male homosexuality, but ultimately its greatest influence proved to be as a precedent in spousal rights, as it became the leading case establishing an injured wife's right to testify against her husband.[5]

Charges were brought against Castlehaven on the complaint of his eldest son and heir, who feared disinheritance, and were heard by the Privy Council under the direction of Thomas Coventry, Lord High Steward. Lady Castlehaven gave evidence of a household which she said was infested with debauchery, and the Attorney-General acting for the prosecution explained to the court that Castlehaven had become ill because "he believed not God", an impiety which made Castlehaven unsafe. However, he insisted he was not guilty and that his wife and son had conspired together in an attempt to commit judicial murder. All witnesses against Castlehaven would gain materially by his death, and "News writers throughout England and as far away as Massachusetts Bay speculated about the outcome."[5]

Castlehaven was convicted, attainted, and three weeks later beheaded on Tower Hill for his sexual crimes: namely the "unnatural crime" of sodomy, committed with his page Laurence (or Florence) FitzPatrick, who confessed to the crime and was executed; and assisting Giles Browning alias Broadway, who was also executed, in the rape of his wife Anne, Countess of Castlehaven, in which Lord Castlehaven was found to have participated by restraining her.

The page who was executed, Laurence FitzPatrick, testified that Lady Castlehaven "was the wickedest woman in the world, and had more to answer for than any woman that lived". In The Complete Peerage, Cokayne adds that the death of Castlehaven was certainly brought about by his wife's manipulations and that her undoubted adultery with one Ampthill and with Henry Skipwith renders her motives suspicious. According to the historian Cynthia B. Herrup,[7] Anne was the equal of Lord Castlehaven in immorality.

Under the terms of the attainder, Castlehaven forfeited his English barony of Audley, created for heirs general, but retained his Irish earldom and barony since it was an entailed honour protected by the statute De Donis. When he was beheaded on Tower Hill on 14 May 1631, those Irish titles passed to his son James.