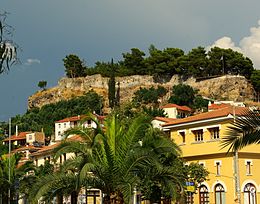 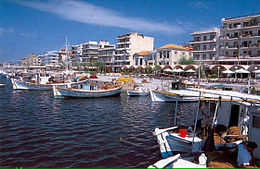 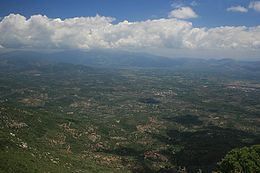 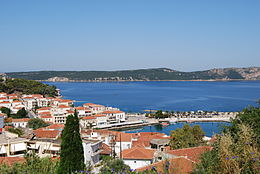 View of Pylos on the Bay of Navarino

Messenia (/məˈsiːniə, -ˈsiːnjə/; Greek: Μεσσηνία Messinia, pronounced [mesiˈnia]) is a regional unit (perifereiaki enotita) in the southwestern part of the Peloponnese, one of 13 regions into which Greece has been divided by the Kallikratis plan, implemented 1 January 2011.[1] Before 2011 Messenia was a nomos (prefecture). The capital and the biggest city of Messenia in either case has been the city of Kalamata.

Messenia borders on Elis to the north, Arcadia to the northeast, and Laconia to the southeast. The Ionian Sea lies to the west, and the Gulf of Messenia to the south. The most important mountain ranges are the Taygetus in the east, the Kyparissia mountains in the northwest and the Lykodimo in the southwest. The main rivers are the Neda in the north and the Pamisos in central Messenia.

Off the south coast of the southwesternmost point of Messenia lie the Messenian Oinousses islands. The largest of these are Sapientza, Schiza and Venetiko. The small island Sphacteria closes off the bay of Pylos. All these islands are virtually uninhabited.

Climate may vary, in the lowlands, temperatures are a bit warmer than Athens. Snow is not common during winter months except for the mountains especially the Taygetus. Rain and clouds are common inland.

Before the 2010 reorganization, Messenia was a nomos (prefecture) containing 29 dimoi (municipalities) and 2 koinotites (communities). The total population, based on the 2001 census was 176,876.[2] Since 2010, Messenia has been a perifereiake enoteta (regional unit) containing only 6 municipalities, but still with a population of 176,876;[3] i.e., Messenia did not change area in the reorganization. Some 25 municipalities and communities were incorporated politically into the other 6 according to the table below.[1]

The main cities and towns of Messenia are (ranked by 2011 census population): 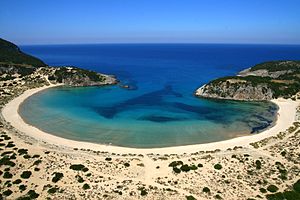 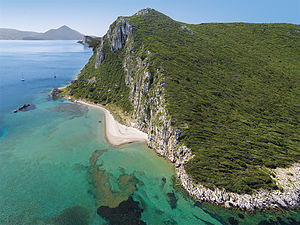 The economy of Messenia is primarily based on agricultural production although in recent years efforts are being made toward the development of activities in other sectors such as tourism.

The tourist development observed is mainly attributable to the promotion of important archaeological sites, such as the Palace of Nestor, Ancient Messene, and the Venetian castles of Pylos, Koroni, Methoni and Kalamata, as well as to the beauty of the landscape. Another key factor for Messenia's economy is Costa Navarino, comprising several eco-friendly luxury resorts and golf courses, which is Greece’s biggest tourist development. [4]

There are many small- and medium-size firms involved in the processing and standardization of agricultural products as well as a number of enterprises devoted to wood processing, furniture manufacturing, and metal construction. The Karelia tobacco company is based in Kalamata.

The main airport in Messenia is Kalamata International Airport (KLX).

The main highways in Messenia are:

The main railways in Messenia are: 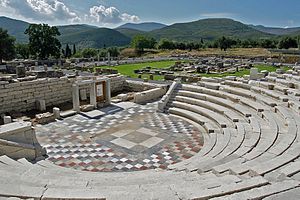 Messenia is mentioned in the oldest work of European literature, the Iliad.[citation needed] The name undoubtedly goes back to at least the Bronze Age, but its origins are lost in the world of mythology. The region was one of the largest that was conquered and enslaved as helots by ancient Sparta.

In the Middle Ages, Messenia shared the fortunes of the rest of the Peloponnese. Striking reminders of these conflicts are afforded by the extant ruins of the medieval strongholds of Kalamata, Coron (anc. Asine, mod. Korone), Modon (Methone) and Pylos. Messenia was a part of the Byzantine Empire.

Much of Messenia fell into the hands of the Ottoman Turks, a part of the area remained with the Venetian Republic. In 1534 a group of families, known as the 'Coroni', settled in Piana degli Albanesi in Sicily. They were Arvanites and Greeks from Koroni.

During the 1680s, the whole of Messenia was regained by the Venetian Republic in the Morean War, and formed part of the "Kingdom of the Morea" until recovered by the Ottomans in 1715. The Mani Peninsula, a part of modern Messenia, was autonomous from Turkish rule due to the fact that it had no harbors.

Messenia became part of independent Greece as a result of the Greek War of Independence (1821-1832). The famous naval Battle of Navarino took place near present Pylos in 1827, and was a decisive victory for Greece and its allies. The population in the area of Kalamata and Messene increased from 30,000 before World War II up to nearly 80,000 in the present day. Messenia suffered damage from the 2007 Greek forest fires.