The Met Office (officially the Meteorological Office until 2000)[1] is the United Kingdom's national weather service. It is an executive agency and trading fund of the Department for Business, Innovation and Skills and a member of the Public Data Group. The chief executive is Rob Varley and the chief scientist is Dame Julia Slingo. The Met Office makes meteorological predictions across all timescales from weather forecasts to climate change. The Hadley Centre for Climate Prediction and Research and the National Meteorological Library and Archive are part of the Met Office. At the Met Office headquarters at Exeter in Devon is the Met Office College, which handles the training for internal personnel and forecasters from around the world.

The Met Office was established in 1854 as a small department within the Board of Trade under Vice-Admiral Robert FitzRoy as a service to mariners. The loss of the passenger vessel, the Royal Charter, and 459 lives off the coast of Anglesey in a violent storm in October 1859 led to the first gale warning service. In 1861 FitzRoy had established a network of 15 coastal stations from which visual gale warnings could be provided for ships at sea.

In 1861, the Met Office started providing weather forecasts to newspapers. Publication of forecasts ceased in May 1866 and recommenced in April 1879.

Connection with the Ministry of Defence 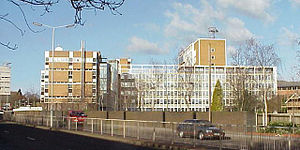 Former Met Office building in Bracknell, Berkshire before relocation to Exeter, since demolished

Following the First World War, the Met Office became part of the Air Ministry in 1919, the weather observed from the top of Adastral House (where the Air Ministry was based) giving rise to the phrase "The weather on the Air Ministry roof". As a result of the need for weather information for aviation, the Met Office located many of its observation and data collection points on RAF airfields, and this accounts for the large number of military airfields mentioned in weather reports even today. In 1936 the Met Office split with services to the Royal Navy being provided by its own forecasting services.

It became an executive agency of the Ministry of Defence in April 1990, a quasi-governmental role, being required to act commercially. Following a machinery of government change, the Met Office became part of the Department for Business, Innovation and Skills on 18 July 2011.[2]

A branch of the Met Office known as the Mobile Met Unit (MMU) accompany forward units in times of conflict advising the armed forces of the conditions for battle, particularly the RAF.

File:Ukmo-exeter-panorama.JPG
The 2003 headquarters building on the edge of Exeter

In September 2003 the Met Office moved its headquarters to a purpose-built £80m structure near Exeter Airport and the A30, in Devon, being officially opened on 21 June 2004 – a few weeks short of its 150th anniversary – by Robert May, Baron May of Oxford, from its previous location of Bracknell in Berkshire. It has a worldwide presence – including a forecasting centre in Aberdeen, and offices in Gibraltar and on the Falklands. Other outposts lodge in establishments such as the Joint Centre for Mesoscale Meteorology (JCMM) at University of Reading in Berkshire, the Joint Centre for Hydro-Meteorological Research (JCHMR) site at Wallingford in Oxfordshire, and there is a Met Office presence at Army and Air Force bases within the UK and abroad (including frontline units in conflict zones).[3] Royal Navy weather forecasts are generally provided by naval officers, not Met Office personnel.

The shipping forecast is produced by the Met Office and broadcast on BBC Radio 4, for those traversing the seas around the British Isles.

The Met Office issues Severe Weather Warnings for the United Kingdom through the National Severe Weather Warning Service (NSWWS). These warn of weather events that may affect transport infrastructure and endanger people's lives. In March 2008, the system was improved and a new stage of warning was introduced, the 'Advisory'.[4]

In September 2015 the Met Office established a "name our storms" project, the aim is to provide a single authoritative naming system for the storms that affect the UK and Ireland by asking the public to suggest names. On 10 November, the first named storm was Abigail.[5]

The main role of the Met Office is to produce forecast models by gathering information from weather satellites in space and observations on earth, then processing it using two IBM supercomputers with a variety of models, based on a software package known as the unified model. The principal weather products for UK customers are 36-hour forecasts from the operational 1.5 km resolution UKV model covering the UK and surroundings[6] (replacing the 4 km model), 48-hour forecasts from the 12 km resolution NAE model covering Europe and the North Atlantic, and 144-hour forecasts from the 25 km resolution global model (replacing the 40 km global model).[7] The Met Office's Global Model forecast has consistently been in the top 3 for global weather forecast performance (in the decades up to 2010) in independent verification to WMO standards.[8][not in citation given] Products for other regions of the globe are sold to customers abroad, provided for MOD operations abroad or provided free to developing countries in Africa. If necessary, forecasters may make adjustments to the computer forecasts. Data is stored in the Met Office's own PP-format.

Formed in 2009, the Flood Forecasting Centre (FFC) is a joint venture between the Environment Agency and the Met Office to provide flood risk guidance for England and Wales. The Centre is jointly staffed from both parent organisations and is based in the Operations Centre at the Met Office headquarters in Exeter.[9] In Scotland this role is performed by the Scottish Flood Forecasting Service, a joint venture between the Scottish Environment Protection Agency (SEPA) and the Met Office.[10]

The Met Office makes seasonal forecasts and distributes them to customers and users globally. The Met Office was the first climate and weather forecast provider to be recognised as a Global Producing Centre of long range forecasts by the World Meteorological Organisation and continues to provide forecasts to the WMO for dissemination to other national meteorological services worldwide.

Met Office research has broken new ground in seasonal forecasting for the extratropics and has demonstrated its abilities in its "seasonal predictions of the North Atlantic Oscillation".<templatestyles src="Module:Citation/CS1/styles.css"></templatestyles> and winter climate for Europe and North America.

Supply of forecasts for broadcasting companies

In particular, two of the main media companies, the BBC and ITV produce forecasts using the Met Office's data. At the BBC Weather Centre, they are continuously updated on the information arriving by computer, or by fax and e-mail.[11][12] The BBC's new graphics are used on all of their television weather broadcasts, but ITV Weather use animated weather symbols. The forecasters at the BBC Weather Centre are employed by the Met Office, not the BBC.[13] On 23 August 2015 it was announced that the BBC would be replacing the Met Office with a competing provider, as part of the corporation's legal obligation to provide best value for money for the licence fee payers.

The Met Office is one of only two World Area Forecast Centres or WAFCs, and is referred to as WAFC London. The other WAFC is located in Kansas, USA and known as WAFC Washington. WAFC data is used daily to safely and economically route aircraft, particularly on long-haul journeys. The data provides details of wind speed and direction, air temperature, cloud type and tops, and other features.

As part of its aviation forecast operation the Met Office operates the London Volcanic Ash Advisory Centre (VAAC).[14] This provides forecasts to the aviation industry of volcanic ash clouds that could enter aircraft flight paths and impact aviation safety. The London VAAC, one of nine worldwide, is responsible for the area covering the British Isles, the north east Atlantic and Iceland. The VAAC were set up by the International Civil Aviation Organisation (ICAO), an agency of the United Nations, as part of the International Airways Volcano Watch (IAVW).[15] The London VAAC makes use of satellite images, plus seismic, radar and visual observation data from Iceland,[16] the location of all of the active volcanoes in its area of responsibility. The NAME dispersion model developed by the Met Office is used to forecast the movement of the ash clouds 6, 12 and 18 hours from the time of the alert at different flight levels.

The Met Office issues air quality forecasts made using NAME, the Met Office's medium-to-long-range atmospheric dispersion model. It was developed as a nuclear accident model following the Chernobyl accident in 1986, but has since evolved into an all-purpose dispersion model capable of predicting the transport, transformation and deposition of a wide class of airborne materials. NAME is used operationally by the Met Office as an emergency response model as well as for routine air quality forecasting. Aerosol dispersion is calculated using the UKCA model.

The forecast is produced for pollutants and their typical health effects are shown in the following table.

Until 2001 the Met Office hosted the Intergovernmental Panel on Climate Change working group, chaired by John Houghton, on climate science. In 2001 the working group moved to the National Oceanic and Atmospheric Administration.[17]

Since 2012 the Met Office Contact Centre (known as the Weather Desk) has been part of the 'Top 50 Companies for Customer Service' programme.

Reports (observations) from weather stations can be automatic (totally machine produced), semi-automatic (part-machine and part manual), or manual. Some stations produce manual observations during business hours and revert to automatic observations outside these times. Many stations feature "present weather" sensors, CCTV, etc. There is also a network of 'upper air' stations, using Radiosondes.

Some stations have limited reporting times, while other report continuously, mainly RAF and Army Air Corps stations where a manned met office is provided for military operations. The "standard" is a once-hourly reporting schedule, but automatic stations can often be "polled" as required, while stations at airfields report twice-hourly, with additional (often frequent in times of bad weather) special reports as necessary to inform airfield authorities of changes to the weather that may affect aviation operations.

Some stations report only CLIMAT data (e.g. maximum and minimum temperatures, rainfall totals over a period, etc.) and these are usually recorded at 0900 and 2100 hours daily. Weather reports are often performed by observers not specifically employed by the Met Office, such as Air traffic control staff, coastguards, university staff and so on.

Meteorological Research was carried out at RAE Bedford with instruments being carried by barrage balloons until the RAE facility closed in the 1980s.

The Met Office association with Cardington continues by maintaining a Meteorological Research Unit (MRU), this is responsible for conducting research into part of the atmosphere called the boundary layer by using a tethered balloon which is kept in a small portable hangar.[20][21] 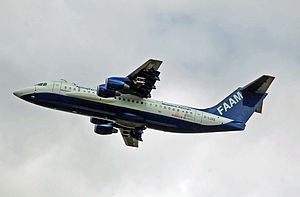 The Facility for Airborne Atmospheric Measurements (FAAM), part of the National Centre for Atmospheric Science, is based at Cranfield Airport. It is a collaboration with the Natural Environment Research Council.[20]

The FAAM was established as part of the National Centre for Atmospheric Science (NCAS),[22] itself part of NERC, to provide aircraft measurement for use by UK atmospheric research organisations on worldwide campaigns. The main equipment is a modified BAe 146 type 301 aircraft, registration G-LUXE, owned and operated by BAE Systems on behalf of Directflight Limited.[23]

Areas of application include:[24]