From Infogalactic: the planetary knowledge core
Jump to: navigation, search
For other uses, see Methone (disambiguation).

Methoni (Greek: Μεθώνη, Italian: Modone, Venetian: Modon) is a village and a former municipality in Messenia, Peloponnese, Greece. Since the 2011 local government reform it is part of the municipality Pylos-Nestoras, of which it is a municipal unit.[2] Its name may be derived from Mothona, a mythical rock. It is located 11 km south of Pylos and 11 km west of Foinikounta. The municipal unit of Methoni includes the nearby villages of Grizokampos, Finikouda, Foiniki, Lachanada, Varakes, Kainourgio Chorio, Kamaria, Evangelismos and the Oinnoussai Islands. The latter constitutes from Sapientza, Schiza and Santa Marina and forms a natural protection to Methoni harbour. The town is also known by the Italian name Modone, as it was called by the Venetians.

Its economy is dominated by tourism, attracted by its beaches (including Tapia, Kokkinia and Kritika) and its historical castle.

The municipal unit of Methoni is subdivided into the following communities (constituent villages in brackets):

Methoni has been identified as the city Pedasus, that Homer mentions under the name "ampeloessa" (of vine leaves), as the last of the seven "evnaiomena ptoliethra", that Agamemnon offers Achilles in order to subdue his rage. Pausanias knew the city as Mothone, named after either the daughter of Oeneus or after the rock Mothon, which protects the harbor, and mentioned a temple to Athena Anemotis there.[3] The Oinoussai complex of islands protected the port of Methoni and at the same time stopped the large sea turbulence. Along with the rest of Messenia, the town gained its independence from the Spartans in 369 BC. During the 4th century BC, Methoni was elaborately fortified and continued to remain autonomous well into the Imperial Roman era, when it enjoyed the favor of some emperors. As with other mediterranean coastal settlements, Methoni was likely heavily affected by the tsunami that followed the 365 Crete earthquake. Roman historian Ammianus Marcellinus wrote that as a result of the earthquake some ships had been "hurled nearly two miles from the shore," giving as an example a Laconian vessel that was stranded "near the town of Methone."[4] During the Byzantine years it continued to remain a remarkable harbor and one of the most important cities of the Peloponnese, seat of a bishopric. 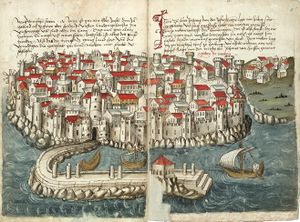 The Venetians had their eye on Methoni (Modon) since the 12th century, due to its location on the route from Venice to the Eastern markets. In 1125, they launched an attack against pirates, who had captured some Venetian traders on their way home from the east, and who were inhabiting Methoni at that time.

The Venetians took over the town in the aftermath of the Fourth Crusade, and secured recognition from the neighbouring Principality of Achaea through the Treaty of Sapienza (1209). A Roman Catholic bishop was installed in the local see. The Venetians fortified Methoni, which developed into an important trade center with great prosperity. Methoni became the important middle station between Venice and the Holy Lands, where every traveler stopped on their way to the East. A pilgrim who went by in 1484 admired its strong walls, the deep moats and the fortified towers.

In the 1490s, the Ottoman Sultan Bayezid II gathered his forces against Methoni. On the August 9, 1500, Methoni fell, after having been in the hands of the Venetians for about three hundred years.[citation needed]

The Venetians returned under Francesco Morosini in the 1680s during the Great Turkish War, but the second period of Venetian rule did not last for long. In 1715 the Turks launched a siege again, but during this second period of Turkish rule the decline was complete.[citation needed] 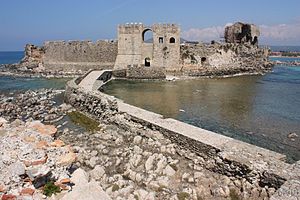 Nowadays the walls of the fortress, even though in ruins, continue to be impressive. The castle of Methoni occupies the whole area of the cape and the southwestern coast to the small islet that has also been fortified with an octagonal tower and is protected by the sea on its three sides. Its north part, the one that looks to land, is covered by a heavily fortified acropolis. A deep moat separates the castle from the land and communication was achieved by a wooden bridge. The Venetians built on the ancient battlements and added on and repaired it during both periods that they occupied the castle. 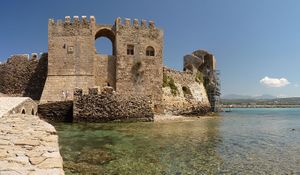 Part of the castle 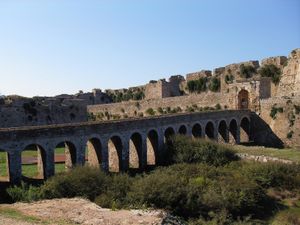 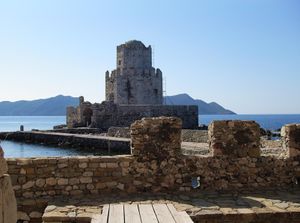 View of the Bourtzi

Its entrance is accessed by a stone bridge of 14 arches, that was built over a moat by the technicians of the Expedition scientifique de Moree, that accompanied general Maison. The entrance gate ends in an arch framed on the right and left by pilasters with Corinthian capitals. It is considered to be the work of Venetians after 1700. On the right and left of the entrance two large battlements can be seen. One battlement is the one built by general Antonio Loredan, during the second period of Venetian occupation.

Right after the central gate, a domed road opens up that leads through a second gate and then a third in the interior of the castle, where the habitable part was and which was separated from the north part with a vertical low wall (approximately 6 meters), fortified with five towers (four square and one octagonal) is dated to the period after 1500, when the Turks tried to reinforce the population and the fortification of the caste. In the interior there are ruins of the houses where the venetian lords lived during the period of rise, the paved street that led to the sea gate, the ruins of a Turkish bath, the Byzantine church of St. Sophia, close to which a slate with Latin lettering was found (dating back to 1714), parts of Doric pillars, a monolithic granite pillar (1493/4), unlined, with a capital on the top of Byzantine style, which is supposed to have supported either the winged lion of Saint Mark, the symbol of Venice, or the bust of Morosini. That is why it is erroneously called "Morosini's stele".[5] There was an inscription on the capital that has not survived to this day. On the left of the entrance are the ruins of the building which originally Imbrahem used as a residence in 1826 and later general Maison. The French of the liberating corps remained in the area till 1833 and the construction of the church of Santa Sotira, which is still attributed to them. In the interior of the castle there are also a few cisterns and the remains of the British prisoner's cemetery during the World War II.

On the south part of the walls rises the spectacular sea gate which has recently been restored. A stone-paved stretch leads over a small bridge to the small fortified islet of Bourtzi. This is the place where many soldiers and inhabitants of Methoni were slaughtered, when the Turks occupied the fort in 1500.

The Bourtzi is dated back to the period after 1500 and has been used in various instances as a prison. It has a two-floor octagonal tower. The tower finishes in a round dome. On the lower floor there was a cistern and the whole works, with small defensive value, and is dated during the first period that the Turks occupied the fortress.

The west part of the walls is not as well constructed as the others. It was here that during the Second World War, after an explosion, parts of well constructed stones from the ancient walls of Methoni were found. In the interior of the walls, ruins of Turkish military establishments are preserved.

The east side of the walls also reached initially to the sea. Nowadays, a long strand of beach lies in front of a large part of it. Parallel to the east wall, up to the Bourtzi, there was a pier and this is where the small fortified harbor was formed (mandrachio), while the big one was to the northeast where ships could be pulled. The long east side has suffered many repairs, performed on the initial venetian battlements of the 13th century, mainly during the second Venetian occupation and the Turkish occupation. In one of the towers parts of the Byzantine fortification are preserved.

On various parts of the fortification there are Venetian emblems with the winged lion of St. Mark and inscriptions. This is the case on the north part of the Loredan battlement, where there is an inscribed plaque from the time when general Loredan was in command in the Peloponnese. On the north wall, on the right of the main entrance, there is also a plaque with the coat of arms of the families of the Foscarini, Foscolo and Bembo, to which the inscription denotes the construction of the Bembo battlement, just before 1500.

The castle of Methoni rises deserted and isolated today. When the winter winds hit its walls the locals say that you can hear the screams of the prisoners and the unjustly killed in the Bourtzi.

Methoni in art and literature 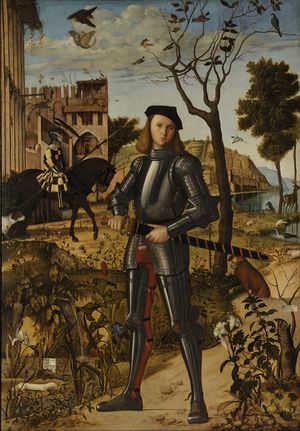 Vittore Carpaccio. Young Knight in a Landscape. The castle on the left has been identified with Methoni, and the knight with Marco Gabriel, its rector during the Ottoman siege of 1500.

One of the possible interpretations of Vittore Carpaccio's Young Knight in a Landscape is the one that identifies the knight as the Venetian patrician Marco Gabriel, who was rector of Methoni during the Ottoman siege of 1500. His family would have commissioned the painting as a tribute to his memory. Being the only Venetian survivor of the siege he had been accused of cowardice; taken by the Ottomans to Constantinople, he was beheaded there on 4 November 1501.[6]

About seventy years later, after the battle of Lepanto (7 October 1571), Miguel de Cervantes was taken to Methoni as a prisoner and spent some time in the Turkish tower. He might have conceived a few pages of the Don Quixote while there.[7]

On 10 August 1806, François-René de Chateaubriand desembarked at Methoni and started here his Grand Tour across Greece and the Middle East, whose account he would publish in 1811 as the Itinéraire de Paris à Jérusalem (Itinerary from Paris to Jerusalem).[7]

Methoni is the southern terminus of the Greek National Road 9 (Patras - Kyparissia - Methoni). Another road links Methoni with Koroni to its east.