As an ancient parish, Battersea was part of the Hundred of Brixton and County of Surrey. It included the exclave of Penge.

Parish in the Metropolis

On 25 March 1888, a separate vestry was formed as a local authority for The parish of Saint Mary Battersea excluding Penge.[2] In 1889, the Local Government Act 1888 reconstituted the area of the Metropolitan Board of Works as the County of London, and Battersea was transferred from Surrey to the new county.[3]

The population of the parish in 1896 was 165,115 and it had adopted the Public Libraries Act 1850 immediately upon obtaining local independence in 1888, with its own vestry. For electoral purposes, the parish was divided into four wards and had 120 elected vestrymen.

In 1900, the London Government Act 1899 divided the County of London into twenty-eight metropolitan boroughs, and the vestries and district boards were dissolved. The parish became the Metropolitan Borough of Battersea, with the borough council replacing the civil vestry.

The Metropolitan Borough included within its bounds Battersea, Battersea Park, Clapham Junction and parts of Wandsworth Common and Clapham Common.

In 1913, John Archer became mayor of the borough and the first black mayor in the capital.[4]

A number of new parishes were also formed within the detached part of Battersea parish, the hamlet of Penge: [5]

In 1901, the borough adopted an unofficial coat of arms, consisting of a shield vertically divided blue and white, the division line being indented (in heraldry-speak Party per pale indented azure and argent). This design was taken from a flag dating from 1803. On top of the shield was a dove bearing an olive branch. The Latin motto was Non Mihi, Non Tibi, Sed Nobis, or "Neither for myself, nor for yourself, but for us".

In 1955, the borough received an official grant from the College of Arms, based on the old device. The colours in the shield were reversed, and a bordure or heraldic border added. The bordure consisted of silver and blue waves, representative of the River Thames, and bore sixteen gold stars for the sixteen wards of the borough. The new crest on top of the helm was the dove of the 1901 design, with the addition of sprigs of lavender, for the old lavender fields of the area, and Lavender Hill, the main road of Battersea. The old motto was retained. 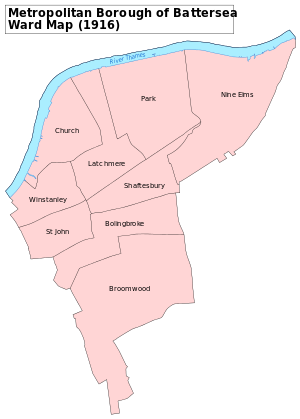 A map showing the wards of Battersea Metropolitan Borough as they appeared in 1916.

The first election to the council was on 1 November 1900, with the Progressive Party taking control of the new borough. They retained power until 1909, when the Municipal Reform Party (allied to the Conservatives) gained a majority. The Progressives regained the council in 1912, holding power until 1919 when the Labour Party gained control. In 1931 the borough come under Municipal Reform control again. Labour regained power in 1934, retaining it for the rest of the borough's existence.

Elections of the whole council were held every three years. Elections were cancelled during the two world wars (1914–1918 and 1939–1945). The 1952 election was postponed for a year so that it did not clash with elections to the London County Council. The number of councillors returned at each election was as follows:.[10]

From 1900 to 1949 the borough was divided into nine wards, returning either three, six or nine councillors:

In 1949 the wards were redrawn, with fourteen wards returning three to five councillors each:

The latest ward to be redrawn was Fairfield ward, with three councillors.

In 1918 the metropolitan borough was divided into two constituencies:

The boundaries of the two constituencies were adjusted in 1949 to reflect the redrawn borough wards:

The constituencies continued unchanged until 1983[11] when the Battersea constituency largely succeeded these two. The current MP is Conservative Jane Ellison.[12]