Camberwell was a civil parish and metropolitan borough in south London, England. It was an ancient parish in the county of Surrey, governed by an administrative vestry from 1674. The parish was included in the area of responsibility of the Metropolitan Board of Works in 1855 and became part of the County of London in 1889. The parish of Camberwell became a metropolitan borough in 1900, following the London Government Act 1899, with the parish vestry replaced by a borough council. In 1965 the borough was abolished and its former area became part of the London Borough of Southwark in Greater London.

In addition, as the population of neighbouring areas increased, parts of Camberwell parish were included in new parishes:

The corporation was granted arms in 1901. The shield depicted the main areas of the borough. In the first and fourth quarter was a well, for Camberwell. The second quarter was for Dulwich: the chevron and cinquefoils from the arms of Edward Alleyn, founder of Dulwich College. The third quarter represented Peckham: the lion was from the arms of Robert, Earl of Gloucester, one time lord of the manor.

In 1927 the borough was additionally granted an heraldic badge and standard. The badge depicted a Camberwell Beauty butterfly. 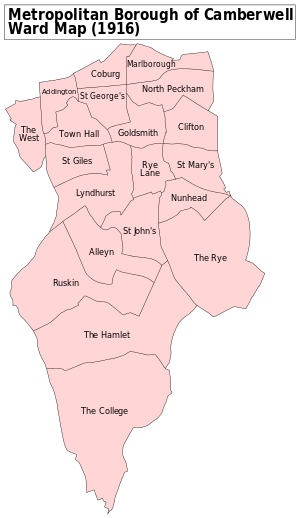 A map showing the wards of Camberwell Metropolitan Borough as they appeared in 1916.

From 1900 to 1934 the borough was controlled by the Municipal Reform Party (allied to the Conservatives). In 1934 the Labour Party gained control, which they retained until abolition in 1965.

In 1918 the borough's representation was increased to four seats: