The ancient parish, was originally dedicated to All Saints, but by the late 17th century it had been rededicated to St Luke. It was in the Diocese of London. In 1824 a new parish church was built in the centre of the parish, it was also dedicated to St Luke and the original parish church became a chapel-at-ease known as All Saints, Chelsea or Chelsea Old Church.[1] From 1831, as the population of Chelsea increased, a number of new parishes were formed:[2]

In the detached part of Chelsea parish, around the hamlet of Kensal Green (Kensal Town), a number of new parishes were also formed:[3]

The area of the borough was 660 acres (2.7 km2), once Kensal Town was transferred to Kensington and Paddington. The population recorded in the Census was:

The borough was granted a coat of arms by the College of Arms on 28 February 1903. The blazon was:

Gules within a cross voided or a crozier in pale of the last in the first quarter a winged bull statant in the second a lion rampant reguardant both argent in the third a sword point downwards proper pomel and hilt gold between two boars' heads couped at the neck of the third and in the fourth a stag's head caboshed of the second.

The winged bull is the symbol of St Luke, patron saint of Chelsea (St Luke's parish church is just off the King's Road). The other emblems referred to various holders of the manor over the centuries: the crozier for Westminster Abbey, the lion for Earl Cadogan (first mayor of the borough), the boars' heads and sword for the Sloane family and the stag's head for the Stanley family.

The motto was Nisi dominus frustra or "It is vain without the Lord".

The fourfold division of the shield was a design favoured by Albert Woods, Garter King of Arms for municipal grants: other examples in London being the metropolitan boroughs of Bermondsey, Camberwell, Islington, Kensington, Southwark 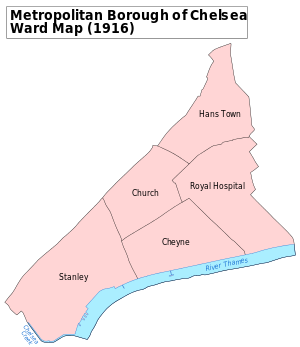 A map showing the wards of Chelsea Metropolitan Borough as they appeared in 1916.

The borough council was controlled by the Municipal Reform Party, which was allied to the Conservative Party, from its creation until 1949. In that year, the "Municipal Reform" label was discarded, and the Conservative party governed the borough until the borough's abolition in 1965. The Chelsea Town Hall, a neo-classical building containing frescos, remains in use. It is situated on King's Road, at the corner of Chelsea Manor Street.

For elections to parliament, the borough formed a single constituency. By 1950, the decline in population meant that the Chelsea constituency also included the Brompton area of the Metropolitan Borough of Kensington.