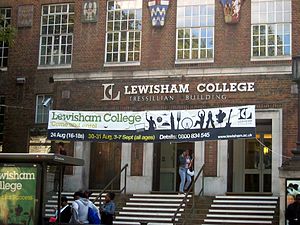 The bottom half of the borough's shield can be seen on this photo of Lewisham College's Tressillian Building, built 1927-31. 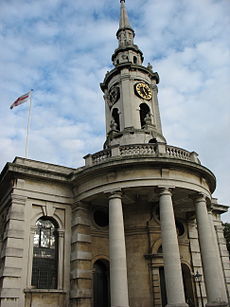 St. Paul's, Deptford, one of the finest Baroque churches in the country

Deptford Town Hall was built between 1903 and 1905 on New Cross Road. The building is in a grand baroque style, featuring carvings of tritons and admirals to emphasise Deptford's maritime heritage. It is now used by Goldsmiths College.

The borough covered the same area of the parish of Deptford St Paul, which had been separated from the neighbouring parish of Deptford St Nicholas to its north in 1730. The rateable values of the two parishes had been roughly equal when they were separated, but St Paul contained all the farmland to the south, the majority of which was built on over the next 170 years.

When the Metropolitan Borough was created, consideration was given to reuniting the two parishes, but a closer equalisation of rateable value was served by uniting St Nicholas with Greenwich to the east.

The growth of the London conurbation had reached Deptford by the end of the eighteenth century but it had been a large industrial town well before this time: the Royal Docks and the Victualling Yard, which provisioned the Navy, and the various private dockyards, meant it was a prosperous and cosmopolitan town.

The borough covered an area of 1,563 acres (6.3 km2) and included the localities of St Paul Deptford, Brockley, New Cross, and St Johns.

The borough did not have an officially granted coat of arms, instead using a device of their own design.

The three choughs in the first quarter represent the county of Surrey. They were taken from the arms of Onslow family, one-time lords of the manor of Guildford. The fourth quarter showed a white horse on red, representative of the county of Kent. Before 1889 the area of the borough was divided between the two counties. The second quarter showed a quarter ship on the stocks, for the naval dockyard. The remaining quarter of the shield was a portrait of Peter the Great of Russia, who learnt the art of naval architecture in Deptford.

Above the shield was a mural crown, representing municipal government. On either side was an heraldic dolphin entwining a trident. 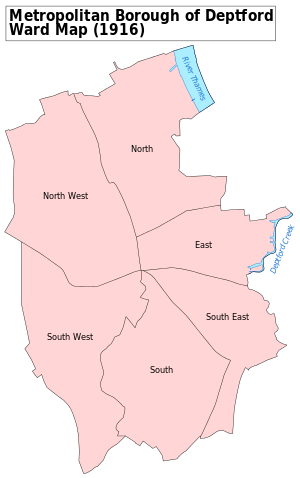 A map showing the wards of Deptford Metropolitan Borough as they appeared in 1916.