When the metropolitan borough was formed it carried on using the unofficial arms adopted by its predecessor, Fulham vestry in 1886. This was a quartered shield, with a depiction of a bridge in the first and fourth quarters. The bridge in the first quarter was the original wooden Putney Bridge, opened in 1729 with its toll houses. Its replacement, the present Putney Bridge, constructed of stone, was shown in the fourth quarter. The new bridge was opened in 1886, when the arms were designed. The second quarter showed crossed swords, from the arms of the Bishop of London. The manor of Fulham was held by the bishop from 691, and his official residence, Fulham Palace, was built in the area. The third quarter was the arms then associated with the county of Middlesex, in which Fulham lay until 1889. The three seaxes on a red field was also regarded as the arms of Essex.

In 1927 councillor F. H. Barber, proprietor of Barber's Department Store in the borough, offered to pay the costs of a grant of arms and new civic regalia. Accordingly, an official grant was obtained from the College of Arms on 12 October of that year, blazoned as follows:

Barry wavy of ten, Argent and azure, on a Saltire gules, two swords in Saltire points upwards of the first enfiled of a Mitre Or, and for the Crest upon a Mural Crown of Seven turrets Or and Ancient Rowing Ship in full sail Sable, the Flags per fesse Argent and Azure charged on the sail with a Rose Gules, surmounted by a Rose Argent barbed Vert and seeded proper.

The silver and blue wavy field was for the River Thames, the swords and mitre signifying the Bishop of London.

The crest rose from a gold mural crown, resembling a city wall, and thus municipal government. The crest itself was a black ship, recalling an expedition to Fulham by the Danes in 879. The main sail was charged with a Tudor rose, recalling the importance of the area in that era, when Fulham Palace was rebuilt.

The Latin motto, Pro Civibus Et Civitate, was translated as "for citizens and state".[1]

The waves from the shield, the two swords, the mitre and most of the crest was brought to the coat of arms of the London Borough of Hammersmith and Fulham when Fulham and Hammersmith merged to form a new London borough in 1965.

The borough was administered from Fulham Town Hall, on Fulham Broadway, in Walham Green. The hall had been built in 1888 – 1890 for the Fulham vestry, and was in the classical renaissance style. When the London Borough of Hammersmith and Fulham was formed, Hammersmith Town Hall was adopted as the administrative centre. Some offices remain at Fulham however, and contains a registry office. The grand hall is a popular venue for concerts and dances. The london borough council also makes the building available for filming purposes.[5] 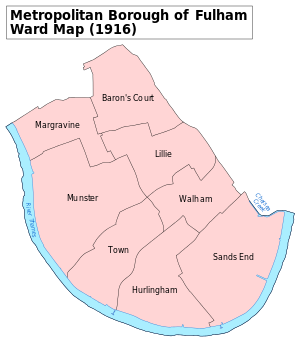 A map showing the wards of Fulham Metropolitan Borough as they appeared in 1916.

In 1955 the borough's representation was reduced to one and a half seats, when part of it was merged with Hammersmith: