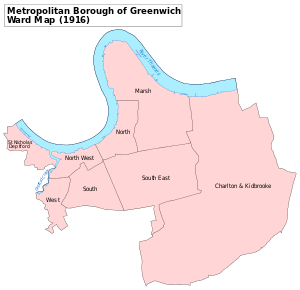 A map showing the wards of Greenwich Metropolitan Borough as they appeared in 1916.

Metropolitan borough councils elections were held triennially. The first election to the borough council was held on November 1, 1900. The result was a majority for the pro-Conservative Moderates, who had 16 councillors elected. The opposition was formed by the Progressives with 8 seats.[8] At the next election in 1903 Moderates held control with the support of 2 Independent Conservative councillors.[9] By the time of the 1906 election, the Conservatives contested the elections throughout London under the Municipal Reform label. The Municipal Reformers held the council with 21 seats to 5 Progressives and 4 Independents.[10] They held the council at the 1909 and 1912 elections: 1909 saw the first Socialist councillor elected to the council.[11] Due to World War I, the next council election was not held until 1919. The Labour Party took control of the borough, with 20 seats to 10 for the Municipal Reform Party.[12] Three years later the position was reversed, with Municipal Reformers retaking control with 22 seats to Labour's 11.[13] At the 1925 election the Municipal Reform and Labour parties both took 15 seats, and the borough council was consequently under no overall control.[14] The same party composition was returned at the 1928 and 1931 elections.[15] Labour subsequently gained control, which they held at the 1934 election.[16] Labour held the borough at the 1937 election.[17] Elections were again suspended during the Second World War, the next contest being in 1945: Labour held the borough.[18] Elections to boroughs due in November 1948 were postponed to May 1949 to coincide with those for county councils. The Conservative Party contested the elections in the place of the Municipal Reformers. Labour held the council at this and all later elections to the metropolitan borough council, with the Conservatives forming the only other grouping.[19] The last election to the council was held on May 10, 1962, when Labour gained 29 seats to 6 for the Conservatives.[20]

A parliamentary borough of Greenwich had been formed by the Reform Act 1832. In 1918 the boundaries were realigned to correspond to the metropolitan borough.

The borough council was granted a coat of arms by the College of Arms on July 15, 1903. The central band bearing an hour-glass represented the Greenwich Meridian and the surrounding stars the Royal Observatory. The crest above the shield was an ancient ship and crossed anchors, standing for the connections of Greenwich with the Royal Navy. The Latin motto was Tempore utimur or "We use time": a reference to Greenwich Mean Time.[21]

West Greenwich House was built in 1876 and served as headquarters for the Greenwich District Board of Works before it was inherited by the new Borough Council in 1900. When built it had a dome and lantern above the parapet. It served as the Town Hall until 1939 after which it housed other council offices. Today it thrives as the West Greenwich Community and Arts Centre; the building was recently restored and refurbished.[22]