The borough was formed from seven civil parishes and extra-parochial places: Furnival's Inn (part), Gray's Inn, Liberty of Saffron Hill, Lincoln's Inn, St Andrew Holborn Above the Bars with St George the Martyr, St Giles in the Fields and St George Bloomsbury and Staple Inn. In 1930 these seven were combined into a single civil parish called Holborn, which was conterminous with the metropolitan borough.[1]

St Giles, St George and St Andrew were depicted on the borough seal. The several constituent parishes were illustrated in the arms granted to Holborn in 1906, while the supporters, the Lion and the Griffin are from the arms of Lincoln's Inn and Gray's Inn (Inns of Court).

Charges from these arms were used, together with charges from the coats of arms of Hampstead and of St. Pancras, when the new coat of arms of the London Borough of Camden was designed in 1965.

Several of the street name signs in the British Museum/Senate House area still bear the "Borough of Holborn" area designation.

Holborn Town Hall still exists, on High Holborn. The four-storey frontage is in three parts: the easternmost section was built as a Public Library in 1894 by architect W. Rushworth. Then the central and western sections were added in 1906-8 (architects: Hall & Warwick) to form a symmetrical facade.

Holborn was the smallest of the twenty-eight metropolitan boroughs of the County of London, with an area of between 405 and 407 acres (1.6 km2). Therefore it was even smaller than the City of London. It also had the smallest population of any of the boroughs throughout its existence. The populations recorded in National Censuses were: 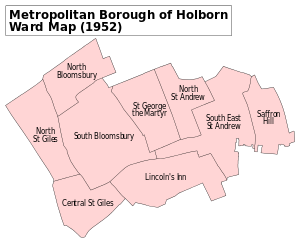 A map showing the wards of Holborn Metropolitan Borough as they appeared in 1952.

In 1950 the borough's representation was reduced to half a seat, when it was merged with part of St Pancras: