The parish of St Mary Islington operated as an open vestry.[1] It was added to the bills of mortality area in 1636. The vestry was incorporated by the Metropolis Management Act 1855 as an administrative vestry in the metropolitan area.

The vestry started work on an electricity supply service at Eden Grove in 1894, which became operational in 1896. New streets were lit with electric light from 1906. In 1936 electricity showrooms were opened at the corner of Holloway Road and Camden Road.[2] The electric supply service became part of the London Electricity Board following the Electricity Act 1947.

It was a local act parish so did not come under the Poor Law Amendment Act 1834 and the vestry continued to be responsible for poor relief, instead of a separately elected board of guardians. This anomaly was rectified by the Metropolitan Poor Act 1867. The parish was large enough in terms of population to avoid being grouped into a poor law union and remained a single parish for this purpose.

The town hall is on Upper Street, and was opened in 1923. It is a listed building.

The Town hall is the headquarters, and contains the council chambers of the successor authority, Islington London Borough Council.

The metropolitan borough was conterminous with the Vestry authority, when it was formed in 1900. Statistics compiled by the London County Council, in 1901 show the population growth in London, over the preceding century. 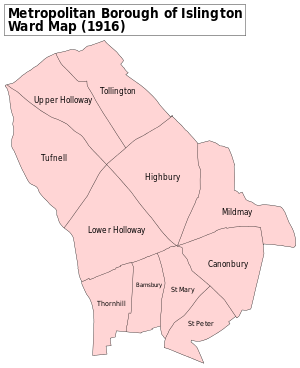 A map showing the wards of Islington Metropolitan Borough as they appeared in 1916.

For elections to Parliament, the borough was divided into four constituencies:

In 1950 the borough's representation was reduced to three seats: