The borough was formed by the London Government Act 1899 from the civil parishes of Lee from the Lee District and Lewisham from the Lewisham District. The borough also took in a small area formerly administered by Camberwell Vestry on the western slopes of Forest Hill.[1]

While there had been minor industry along the River Ravensbourne for centuries and the extension of the railways had seen suburban development, there were still large areas of farmland at the time of the borough's formation. The next London property boom in the 1930s saw much of that farmland built upon with both private estates, and the final gaps on the roads to Kent were filled in later on with London County Council built social housing, particularly in Downham and Bellingham.

The borough bordered Deptford, Greenwich, Camberwell, and had a portion of the southern boundary of the county of London.

When the borough was created in 1900, a committee was appointed to design a coat of arms. This device, adopted in the following year, included a shield, crest, supporters and motto.[5]

The crest was a raven, representing the Ravensbourne river.

The supporters were a silver buck sprinkled with red stars and a bear with a gold portcullis on his shoulder. These were also derived from the arms of the Earl of Dartmouth and Lord Northbrook respectively.

The Latin motto was Salus Populi Suprema Lex, or "the welfare of the people is the highest law" - a motto common to many English municipalities.

In 1950, in celebration of the borough's golden jubilee, a grant of arms was obtained from the College of Arms.[6]

The shield was greatly simplified: A Saxon crown and golden lion recalled the association of King Alfred with the area. The background of three colours recalled the three main areas of the borough: green for Lee Green, purple for Hither (or heather) Green and black for Blackheath.

The raven crest was retained, with the addition of a silver and blue wave for the Ravensbourne.

The 1901 supporters were altered to make them unique to the borough. Around their necks were placed mural crowns, representative of local government.

The motto was not changed, and was continued in use by the London Borough of Lewisham in 1965. 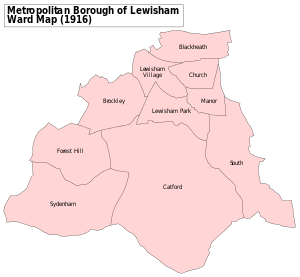 A map showing the wards of Lewisham Metropolitan Borough as they appeared in 1916.

In 1950 the borough's representation was increased to three seats: